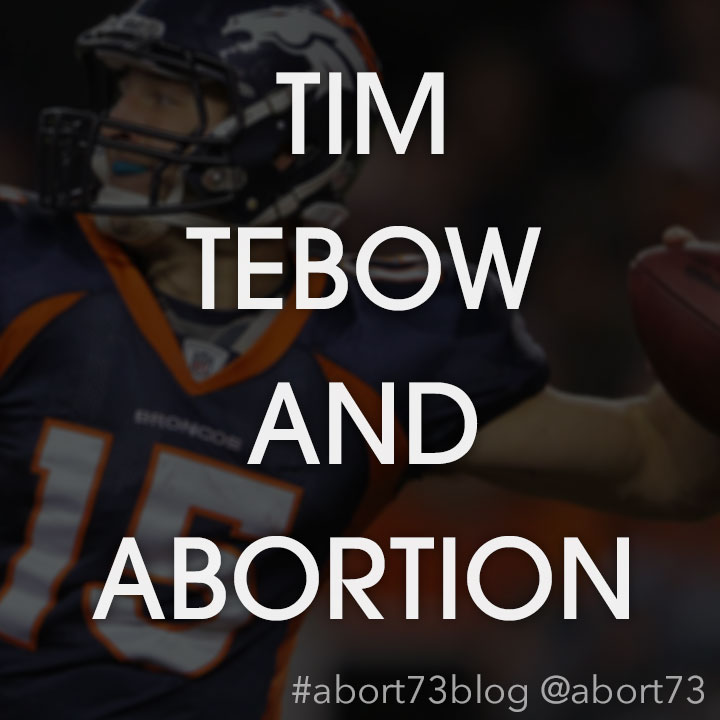 Last month, my uncle sent me a copy of Tim Tebow's new book, Through My Eyes. I finished reading it over the weekend. Though I was skeptical (jealous?) of Tebow's wild popularity when he first emerged on the college football scene, he gradually won me over. How could he not? By the time he graduated from Florida, I found myself rooting for him despite his tragic choice in schools. For a couple years now, I've been praying that God would form a connection between Tim Tebow and Abort73. Reading his book only made me more desirous for such a union to take place.

Why? Because Tim Tebow offers the unprecedented combination of three things:

1) A birth history that is directly connected to abortion.
2) A position of massive, cultural influence.
3) Unflinching, public devotion to Jesus Christ.

It's rare to find even two of these characteristics in the same person. I don't know of anyone else in the world who holds all three. And how many people do you know of who are both over-the-top evangelists and wildly popular celebrities? It's an unheard of combination, which is why it seems almost certain that God is raising Tim Tebow up for something far more than football. And Tim makes that clear at the very beginning of his book. He writes:

My dad was preaching in a remote village in the Philippines in 1986. As The Jesus Film played on a large, homemade screen hanging between two coconut trees, he became heavily burdened by the millions of babies being aborted in America. While weeping over the gigantic loss of human life, my dad began to pray, "Father, if you want another preacher in this world, you give him to me. You give me Timmy, and I will raise him to be a preacher."

The first prayer for Tim Tebow was offered in the context of abortion. It was made before he was born. Soon afterwards, the entire Tebow family would take up the father's prayer, asking the Lord to bless them with another son—a preacher who would help topple the injustice of abortion. The Lord heard their prayer, and Mrs. Tebow conceived. In the wisdom and providence of God, it was a very difficult pregnancy, and Tim would soon be threatened by the very thing that had first burdened his father to pray.

After seeking out the best doctor in Mindanao, the second largest island in the Philippines (where the Tebows were missionaries), the doctor told Mrs. Tebow: "An abortion is the only way to save your life." Unmoved, the Tebows waited and prayed. For months, the pain and bleeding did not subside, but God's peace sustained them. And when the bleeding finally did subside, the Tebows were able to fly to Manila where Tim would ultimately be born. The attending physician declared him a "miracle baby." He had shared the womb with a blood clot larger than his body and had been sustained by a placenta that was barely attached. In the weeks to follow, both Tim and his mom would remain in the hospital for a difficult recovery. Mrs. Tebow required surgical intervention, leading the doctor to declare that she wouldn't have survived the birth had they not made it to Manila. And so began the life of the young man who would come to be regarded by many as the greatest college football player in history. And he's proved a pretty fair preacher as well.

Despite Tim's unique credentials, despite his faith, courage, and determination, the obstacles against his taking on the more public condemnation of abortion are real and formidable. You might even call his involvement an impossibility, which is why I pray. In America today, giving public praise to Jesus Christ is one thing, publicly condemning abortion is quite another. Corporate America may begrudgingly tolerate the first, but has almost zero tolerance for the second. Becoming a consistent, outspoken opponent of abortion would almost certainly void Tim Tebow's contracts with Nike and EA Sports, and what would it do to the off-the-chart sales of those #15 Broncos jerseys? Not only would it be lost income for Tim, it would be lost income for the Tim Tebow Foundation.

At the same time, Tim Tebow has already exhibited far more courage on this issue than most public Christians. He's seen the storm abortion can create, as evidenced by his Focus on the Family Super Bowl commercial. Though the commercial ended up having little to do with abortion, he received a deluge of criticism from those in the media who wrongly assumed that it would deal with abortion. He certainly doesn't shy away from the abortion issue when it comes up, but most in the media are working to ensure that abortion doesn't come up. What Tim has yet to do is make the public exposure of abortion a personal priority. He hasn't hitched his saddle to this issue with the aim of making abortion public enemy number one. I don't say that critically, and it's only because I have so much respect for him that I even dare hope such a development might one day be possible. My devotion to this issue costs me relatively little compared to what it would likely cost Tim.

But I am hopeful. I'm hopeful that the impossibility of overthrowing this culturally-entrenched injustice will appeal to Tim's relentless, competitive drive. I'm hopeful that his documented refusal to accept the status quo, his disdain for the assertion that something can't be done, will overcome what any self-respecting agent would surely label PR suicide. I'm hopeful that God can and will bring Tim Tebow to the place where he says, "I'm going to leverage as much influence and energy as I can possibly spare towards the exposure and elimination of abortion."

Much of Tim's book is a game by game recap of his college career. It may be a bit monotonous for the non-football fan, but intertwined throughout are glimpses of his moral and physical development. Ever since middle-school, people have been telling him that he couldn't play quarterback. Many are still telling him it's not a good fit for his skill set. Thankfully, he's never paid them much attention. In my one year of college football, I played with a great quarterback—but he was a bit short in the character department. Like Tebow, he would go on to become a Heisman finalist and first-round draft choice. Unlike Tebow, he was a prototypical NFL quarterback—regarded by some as a better prospect than Peyton Manning, who was selected one pick before him in the draft. Today, that quarterback has been retired for a number of years and is generally regarded as the biggest bust in NFL history, at least until Jamarcus Russell came along. Proof positive that character counts. And so I pray for Tim Tebow's success. I pray he would show America's sports-obsessed youth a better way to live, and I pray God would use him in accordance with the first prayer ever prayed for him. God doesn't need Tim Tebow (and his half million Facebook fans!) to end abortion, but he can use him just the same. Within a few hours of the first time Tim wore John 3:16 on his eye patches during a game, Google recorded 94 million searches for that famous verse. Now imagine what would happen should he wear a T-shirt reading Abort73.com. I pray that day is soon in coming!