“The Smartest Thing I Ever Did” 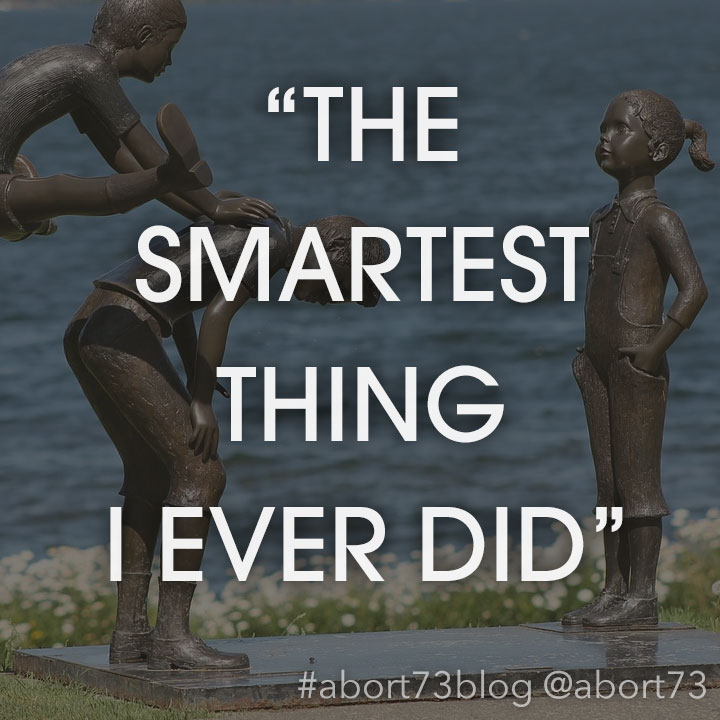 Abort73 receives frequent testimony from women who have gone through an abortion. Most of the stories they share are posted in our “Abortion Stories” section, and the vast majority—somewhere around 95%—are stories of regret. From time to time, however, we hear from women who sing the praises of their purported abortion. Such was the case last month when we heard from a 30-year-old Seattle woman who calls her abortion “the smartest thing [she] ever did.” One of the challenges in reading stories like hers is that they don’t sound nearly as outrageous as they should—for the simple fact that the word “abortion” is clinical and abstract. As such, I’m going to share her story just as she submitted it, but I’m going to replace each mention of abortion with a more straightforward description. My edits are marked with brackets:

[Paying someone to violently kill my unborn child] was the smartest thing I ever did. At 21, I was in a terrible relationship with a guy who didn't want me to work because he was convinced I was cheating with everyone there. I wasn't, but he still expected his bills to be paid, and he couldn't hold down a job. It was an emotionally and occasionally physically abusive relationship.

[Having someone kill our tiny and helpless child] was the kick in the pants I needed to get my life together. He wasn't fit to be a father; he wasn't the kind of role model I wanted. I'd been on birth control and trying to find a way out of our lease.

When I got pregnant, I realized I didn't want that life nor did I want it for a child. I [hired someone to kill the child], moved out of state, finished college, traveled the world, and lived abroad. Now, I have an amazing career and an even more amazing man who stands by my choice (to violently end the life of my child).

If I hadn't [killed my son or daughter], I would now be saddled with an 8-year-old, working my minimum-wage job with a dead-beat ex who doesn't even pay child support for the kids he went on to have after I left him. I would have been trapped in merely an existence rather than having a life.

I wasn't then, and am still not now, ready to be a mother. I wish the best to any and all considering [ending the life of their children] and hope they make the right choice for them. Sometimes, setting yourself free is the answer.

Some will call my edits manipulative and misleading, but I would disagree. Here’s why. Abortion kills a living human being. This is objective fact. Every honest abortion advocate admits this. There is no debate on this point. Secondly, abortion is violent. This too is beyond argument. “Violent” is defined as “using or involving physical force intended to hurt, damage, or kill someone or something.” Abortion forcibly dismembers a living human being for the purpose of killing that human being. Here again, this is objective fact that is beyond dispute. Honest abortion advocates concede this reality—arguing instead that the violent death is justified and unavoidable. Thirdly, abortion is a contractual killing that can only be performed legally by a licensed third-party. All of my edits reflect these straightforward realities.

We can and should sympathize with women who are trapped in abusive relationships and single moms who get no support from a deadbeat dad, but we must not sympathize with the notion that these hardships somehow justify the violent death of a child. How many born children are being raised by single moms who work a minimum-wage job? Do these moms have the right to “set themselves free” by killing their child? Of course not. But what if the father is unfit, or is a poor role model, or doesn’t pay child support?! Does that change anything? Is that sufficient reason to kill an innocent human being? You know the answer.

It is not hard to expose the moral vacuousness of abortion when we lift the veil of abstraction and add some context. In order for abortion to be defensible—when child-killing is so indefensible—it would have to be true that human beings are categorically different before birth than they are after birth. Since this is not true, there can be but one conclusion. The violent execution of an unborn child is just as abhorrent as the violent execution of a born child—no matter how grateful the mother might feel after the fact. Felt guilt and actual guilt are two entirely different things.