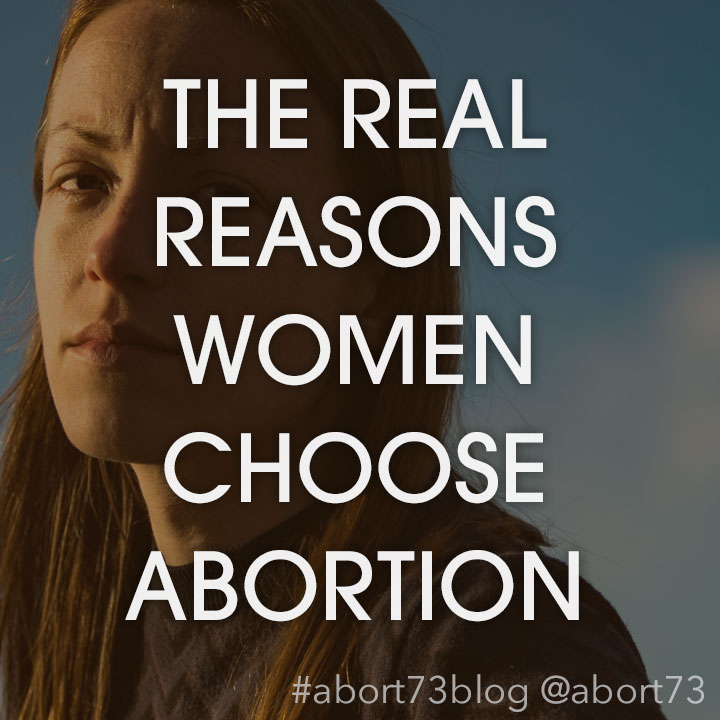 Why do women have abortions? As important a question as that is, it's hard to find a reliable answer. For more than a decade, the Guttmacher Institute has listed the same three reasons on their abortion fact sheet. Based on a 2004 survey of 1,209 post-abortive women at nine different facilities, they report the following:

You don't have to be a statistician to notice that these percentages don't seem to add up. How can you have more than 100% of something? This apparent discrepancy owes to the fact that each respondent was allowed to give more than one reason for having an abortion. Most respondents chose four (out of 13 possibilities); some women selected as many as eight. Though the 8-page surveys were ostensibly designed to allow for very specific and thorough responses, the reported conclusions provide little more than sweeping generalizations.

This is almost assuredly what the Guttmacher Institute wanted. It gives them and their cohorts at Planned Parenthood the opportunity to say that 3/4 of all abortions happen because the woman can't afford a baby—even if finances were a relatively minor consideration in the overall decision-making process. If you dig into the data deeper, you'll see that only 23% of respondents identified the inability to afford a child as the main reason for having an abortion. Along the same lines, not wanting to be a single parent was the main reason for abortion in only 8% of respondents, and only 4% of respondents identified school or work concerns as the most important reason.

The number one most important reason for having an abortion—I'm not ready for a child right now—was selected by 25% of respondents. Strangely, it's not even listed as such on the abortion fact sheet. Wouldn't it have been more more honest and helpful to highlight the most important reasons? Probably, but there's an agenda in play here. It's in the financial best interests of the abortion industry to make the reasons for abortion sound as sympathetic as they possibly can, and they do a remarkable job at it. I'm guessing this is why other notable numbers were left off their fact sheet.

For instance, these are some of the survey statistics that you won't find on their abortion facts page:

None of these statistics fit the standard pro-abortion narrative, which overemphasizes the hard cases and underemphasizes the external pressures working to coerce women into an unwanted abortion. Be that as it may, we can look to the state of Florida for a far more current and representative window into the reasons women choose abortion. Though it doesn't receive much public attention, Florida records and publishes the given reason for every abortion performed within its borders.

Below you will find the percentage and reason for all 71,740 abortions that were performed in Florida in 2015:

Without knowing the exact categorization methodology used in Florida, we can still speculate as to why these discrepancies exist. In the Guttmacher survey, participation was entirely voluntary, and none of the answers were vetted against the woman's actual abortion. It's possible then that women who aborted for more socially-acceptable reasons, like fetal abnormality or economic hardship, were more willing to take the survey than other aborting women. It's also possible that some respondents were less than honest, knowing that the veracity of their statements could not be challenged.

By contrast, each of the Florida responses can be substantiated against an actual abortion on record—making them less prone to fabrication or exaggeration. Though it might seem counterintuitive to suggest that someone would answer disingenuously on an anonymous survey, there is plenty of precedent. We are all remarkably adept at self-justification, and with a subject as contentious and controversial as abortion, it only makes sense that respondents would be drawn towards the most culturally-accepted answers. They might even do so subconsciously, having convinced themselves that their abortion was medically or economically necessary, when in fact it wasn’t.

So, what’s the takeaway from all this? First, I think it’s fair to say that the way Guttmacher presents their statistical data is overly simplistic and misleading. Second, even if we accept their basic narrative, it still doesn’t do anything to justify abortion. Consider the scenarios below.

Which of these women, do you think, has the right to end her baby’s life because of the difficult circumstances she’s facing? The answer is an obvious one, right? There are no circumstances that can justify killing a child. But notice that the scenarios above parallel the three leading reasons for abortion, as presented on Guttmacher’s abortion fact sheet, with one exception. The babies in these scenarios are living outside the womb; the babies in the first scenarios are living inside the womb. But why should that matter? Why should your physical location or your degree of dependence determine whether or not your life deserves protecting?

Not being able to afford a child, not wanting to interrupt your schooling, and not wanting to be a single parent are all very good reasons for not having a baby, but they are not good reasons for killing a baby that is already alive. Remarkably, Guttmacher reports that of the 38 respondents who were interviewed at length, more than one-third said they considered placing their baby for adoption, but “concluded that it was a morally unconscionable option because giving one's child away is wrong.” When it comes to unplanned pregnancy, there is only one morally unconscionable option, and it is not adoption.