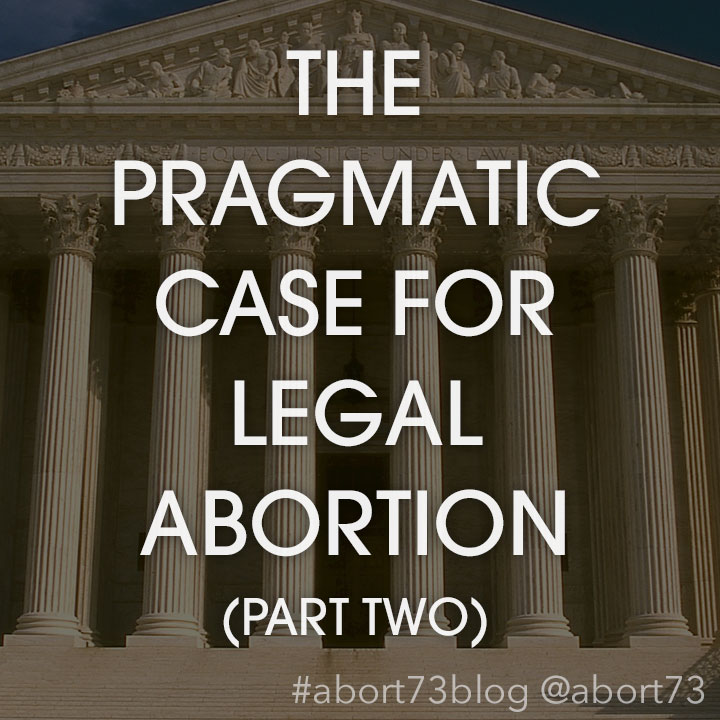 In the first installment of this article, I introduced a list of pragmatic assertions that were made in defense of legal abortion. They came to us through a series of Instagram comments and can be summarized as follows:

Having already argued that the intrinsic evil of abortion makes the pragmatic "gains" entirely inconsequential, I now want to focus on the assertions themselves. Is it really true that restrictive abortion laws have no impact on the abortion rate? Does decreasing the abortion rate actually increase crime and poverty? Before we get there, you may have already noticed that the listed assertions are self-refuting. Look at them again if you missed it.

We only need to take a look at the [states] such as Mississippi and Alabama (which) have some of the most restrictive abortion laws in the nation, but have very high crime rates, high rates of unintended pregnancies, very high rates of poverty and actually account for a higher overall abortion rate compared to most other states... In fact reaserch suggest(s) that restricting abortion actually increases overall abortion rates.

Intuiting perhaps that a reduction in crime and poverty does not justify the mass execution of innocent and helpless human beings, the author hedges his philosophical bet by introducing a second line of reasoning—albeit one that is entirely incompatible with the first. We might frame the pairing this way: Terrible things will happen if we outlaw abortion! Plus, outlawing abortion won't change anything. Well, which one is it?! When it was pointed out that Mississippi actually has the second-lowest abortion rate in the country, the author responded:

The rates you cited only account for legalized abortion, which of course will decrease when you [enact] restrictions. However we have actually seen an overall increase in self induced and illegal abortions among women. Which has shot up by over 34% and contributes to raising the overall rate. Also many women simply get abortions from other states. Women who were from Mississippi almost tripled in the category of those who received out of state abortions. The abortion laws have also led to an extremely high number of unintended [births] which in turn causes several socioeconomic issues that relate to poverty since many women are forced to carry through pregnancies they don‘t want or can't support.

Here again we see the same line of contradictory reasoning. It goes like this: Mississippi's state-level restrictions are not reducing the abortion rate; plus they're causing more children to be born into poverty since fewer babies are being aborted. Since neither argument is sufficient on its own, they are combined in an incongruous attempt to cover all the bases. The "proof" for the first claim comes from a 2016 NY Times op-ed titled "The Return of the D.I.Y. Abortion."

According to the article, internet searches for self-induced abortions began to rise in 2008 before experiencing a 40% increase in 2011. Though there is no way to know how many of these searches led to actual attempts, an examination of corresponding birth data offers a theoretical measuring stick. Not surprisingly, "women living in states with few abortion clinics had many fewer legal abortions." The author, Seth Stephens-Davidowitz, reports that:

Women living in states with the fewest abortion clinics had 54 percent fewer legal abortions — a difference of 11 abortions for every 1,000 women between the ages of 15 and 44. Women living in states with the fewest abortion clinics also had more live births. However, the difference was not enough to make up for the lower number of abortions. There were six more live births for every 1,000 women of childbearing age. In other words, there appear to have been some missing pregnancies in parts of the country where it was hardest to get an abortion. Self-induced abortions could be playing a role, although more research must be done... on rates of pregnancy and unintentional miscarriage in different regions.

Why the need for more research? Because the data above does not account for regional rates of pregnancy or miscarriage. Unreported, self-induced abortions may account for a portion of the hypothetical shortfall in births, but it's also possible that women who are regionally less likely to have an abortion are also less likely to risk an unwanted pregnancy. The op-ed concludes with the assertion that the demand for do-it-yourself abortions is increasing, but that's as far as it goes. There is absolutely no suggestion that "restricting abortion actually increases overall abortion rates." Nevertheless, the author of the original comments doubles down on incongruity by asserting the following:

Since legalized abortion we have actually seen a decrease in the overall rate by 12% even though abortion laws are actually getting more liberal across the U.S... In states that had restrictive abortion laws such as Texas and Indiana, not only did the rate (of) overall and illegal abortions increase, we also saw a rise in poverty rates across the board, along with a high number of teen pregnancies... The bottom line is abortion is decreasing, but restricting abortion actually increases the overall rate. [The thing that] is decreasing the (abortion) rate is proper sexual education and avaliable contraception.

The first assertion, that the overall abortion rate has fallen by 12% since abortion was federally legalized is patently false. In 1973, the first year in which abortion was legal in all 50 states, there were 615,831 abortions. By 1981, the annual number had more than doubled. In 2014, there were approximately 954,000 abortions, a 55% increase over 1973. The claim that U.S. abortion law has become more liberal since 1973 is also false. It's hard to imagine a more liberal ruling than what was originally set forth by Roe v. Wade and Doe v. Bolton: any abortion, at any time, in any state, for virtually any reason. In the years that have followed, abortion laws have become less liberal as states have restricted abortion on the fringes—by way of mandated waiting periods, counseling sessions, and parental consent requirements.

With regard to Texas and Indiana, the overall abortion rates have been in steady decline. If this were not the case, if restrictive abortion laws were actually increasing the overall abortion rate as the commenter maintains, why blame restrictive abortion laws for a rise in poverty and teen pregnancies? You can't have it both ways. Finally, the "proof" for the claim that sex education and contraception is driving the national abortion decline comes from a 2015 article in The Atlantic titled, "Why Are Fewer American Women Getting Abortions?" After noting that public abortion opinion has not changed much over the last four decades, the article states:

If public opinion has not shifted on the issue, then why are American women getting fewer abortions? There are a number of possible explanations, although none are fully satisfying. The decline seems to be driven by three very different groups of women: those who can’t access abortions; those who no longer need to get abortions because of the availability of contraception; and those who don’t want to get abortions.

"So what has changed about abortion in America over the past five years?" the article asks. "First, in many places, it’s getting harder to get an abortion." In other words, more restrictive abortion laws result in fewer abortions. The second of the potential reasons listed, increased access to contraception, comes with a caveat. Though teen pregnancy rates have declined dramatically, teens barely account for 12% of total U.S. abortions. Among women in their 20's, who account for almost 60% of U.S. abortions, there is little indication that contraception use is on the rise. The article continues:

Since certain portions of the Affordable Care Act took effect in 2012, birth control has become free for many American women, since the law requires most insurance plans to cover contraception without charging individuals... Yet according to a report by a company that tracks the pharmaceuticals industry, women aren’t necessarily using more birth control.

The only other possibility, according to the article, is that "fewer women feel comfortable getting an abortion." Though the author calls this a "murkier possibility," she notes:

There is a substantive generational argument to be made here. Although public opinion on abortion has stayed relatively steady for four decades, support for legalizing the procedure under any circumstance spiked in the early 1990s, when today’s fortysomethings were coming of age. Their younger peers haven’t had a similar shift in attitudes... Although today’s twenty- and thirty-somethings grew up in a time when abortion was more common than ever before, they’re not choosing to have abortions themselves.

The article concludes with the reiteration that there is no way to definitively explain the declining abortion rate, nor is there a hint of the assertion that increasing access to sex education and contraception is the best way to reduce abortion. Instead she concludes, "Americans’ attitudes on abortion may [be] pretty much the same. But in their lived-out lives, Americans are moving away from embracing abortion, not toward it."

This is good news, and I like to believe that Abort73 is having at least some influence on America's changing perception of abortion. As to the claims listed at the outset, we should not be surprised that those who support abortion do not want to see it restricted in any way. Every time access to abortion is restricted, it implies that there is something wrong with abortion. It makes their supposed moral foundation less secure.

Abortion proponents are happy to talk about ways to reduce the abortion rate, so long as you never mention legal restrictions of any kind. Just imagine if someone were brazen enough to take this same tact with child pornography. Would anyone dare assert that the best way to reduce or eliminate child pornography is to make it "safe" and legal? Of course not! The mere suggestion demonstrates a deplorable lack of empathy for the victims and a total misunderstanding of the role of law. By the same token, it doesn't matter how many pragmatic advantages abortion may afford to individuals or the community. Abortion is an act of violence that kills an innocent human being. End of story.