The Politics of Parental Web Filters 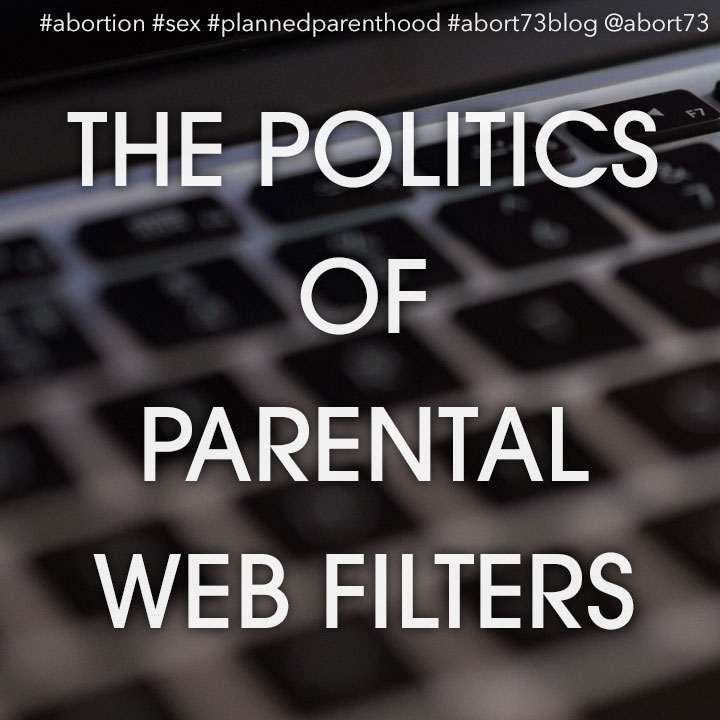 For the last week or so I've been sending emails back and forth with Trend Micro Systems. They're the company behind some of the most prominent internet security filters available—filters designed to protect computers from web-based assaults and to protect minors from inappropriate web content.

The dialogue began when I requested to know what their specific criteria was for determining what websites they block—a request motivated by an email that was forwarded to me from a frustrated Trend Micro client who couldn't figure out why Abort73 was being blocked as a "Hate / Violence / Racism" site.

After the first few exchanges, I had the strong impression that whoever was on the other end of the emails was either a machine or someone with an extremely thin grasp of the English language (or both). The responses were vague and disjointed, they communicated almost nothing, and always ended with something like, "if we don't hear back from you within 24 hours, we'll trust this has resolved your issue."

I continued to ask for more details and was eventually told that the case had been reviewed by their technicians, and that I needed to clean out my IE cache to see the latest results (as if I were using Internet Explorer). Not having access to the program myself, I went ahead and downloaded a trial version of Smart Surfing for Mac to see what I could find out.

After installing and configuring the default protection filter (which is supposed to block websites that are not age appropriate for teenagers), I saw that sure enough, Abort73 was being blocked, under the category of "Sex."  I switched to both the "high" and "low" filter presets and learned that Abort73 was blocked at every level, from child all the way to "mature" teenager.

From here, I did some research on the "Sex" category and found the following disclaimer included in the description explaining what kind of sites are blocked in this category:

What was much less clear to me was why, with that standard in place, the Planned Parenthood website was not being blocked—at any level. Even at the the most extreme security setting, which is supposed to filter out any sites not appropriate for children, Planned Parenthood gets through—as does NARAL (Pro-Choice America)—as does the NOW page on abortion.

And while Abort73 is tagged with the "Sex" label, this was the most prominent headline on Planned Parenthood's website the day I visited: "SAFER SEX." Beneath that was an article tagged this way: "Fashion designer and icon Jeremy Scott takes groundbreaking fashion to the bedroom." The homepage links down the right side of their page included "Abortion," "Birth Control," "Emergency Contraception," and "Sexually Transmitted Diseases." By typing your zip code into a box on the home page, you get a list of local abortion clinics with maps, directions and phone numbers. This was all accessible to me with the child "filter" on. Maybe I'm biased, but one could argue that the Planned Parenthood website deals with both sex and abortion.

To be fair, I also noticed that the National Right to Life website and Priests for Life website were not being blocked either. After raising these apparent inconsistencies in my continued correspondence (and weathering another round of generalities), I finally received a relatively thorough explanation as to why all these sites are, in fact, correctly categorized. Here's the reason:

"[The] majority of their contents [sic] falls under a different category and not solely discussing [sic] Abortion."

To further elaborate, the email stated that the websites for Planned Parenthood, NOW and the National Right to Life Committee are primarily "Political Sites advocating non-mainstream social or political viewpoints." Priests for Life is a "Religion Site that promotes/offers/sells means/information on accepted religion that are seen as not link [sic] to malign/demonic/atheistic [sic]." The NARAL website was simply classified as "unrated" (I wonder who you have to know to be left "unrated"?). So there you have it—as clear as mud.

With their assurance that everything is as it should me, and with my request for reclassification denied, my conversation with Trend Micro has come to an end. It ended as I expected it would, but as a parent and a web master, I come away a little wiser for the wear. I'm reminded that parental web controls are a poor substitute for wisdom and discernment. I'm reminded that external constraints can sometimes keep good things out and bad things in. I'm reminded that we don't always compete on level playing fields, and I'm reminded that the power of God far exceeds the power of internet filters.