Abort73.com > Abort73 Blog > The Most Dangerous Place in the World

The Most Dangerous Place in the World 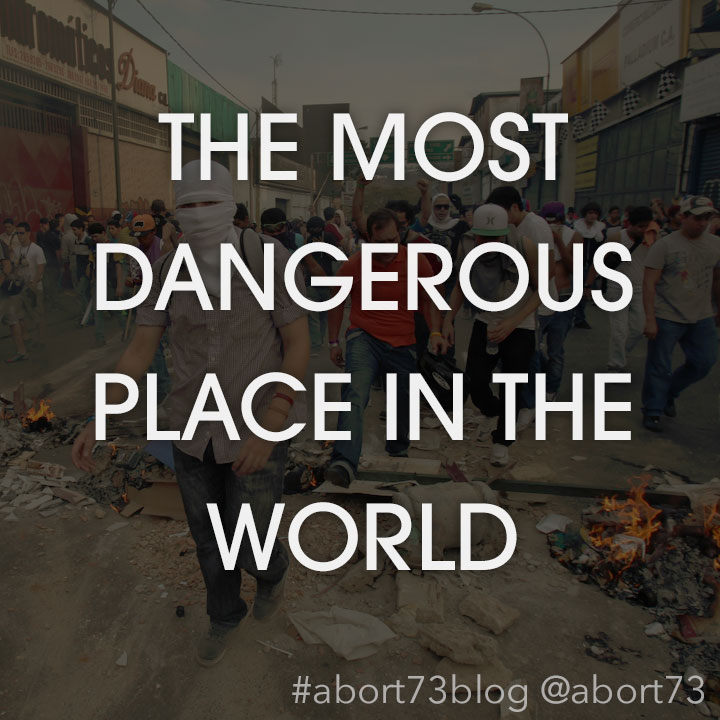 Statistically, Caracas, Venezuela is the most dangerous city in the world. The homicide rate in Caracas is 120 homicides per 100,000 people. That means that everything else being equal, residents of Caracas have approximately a .12% chance of being murdered in any given year. However, if we were to plot that percentage on a pie chart, it would barely show up. One tenth of one percent amounts to little more than a straight line. That's not to diminish the very real danger of living in Caracas, but to point out that even in the most dangerous city in the world, residents have a 99.88% of not being murdered this year.

In the United States, St. Louis holds the dubious distinction of being America's most dangerous city. Its homicide rate is 60 per 100,000 people, exactly half of that in Caracas. Everything else being equal (which I know it isn't), people in St. Louis have a 99.94% chance of not being murdered this year. On the one hand, that doesn't sound too bad. On the other hand, imagine that homicide rate on the average high school campus. In a school of 2,000 students, two would be murdered each year. How many parents would feel comfortable sending their children to that school?

For the last four years, my family and I have lived in Horry County—a few miles south of Myrtle Beach. The homicide rate here is somewhere around nine homicides per 100,000 people. The graph below shows how its homicide rate compares to that of Caracas and St. Louis. All that to say, the most dangerous place in America is a woman's womb, which was designed and intended to be the safest place in the world. In fact, the American womb is almost 160 times more dangerous than the most dangerous city in the world. Is that not unbelievable? Now consider this. Throughout the whole of U.S. history, approximately 2.2% of the military personnel who actively served in wartime have been killed in the line of duty. For U.S. combat troops in Vietnam, approximately 3.6% lost their lives. Of the American soldiers who stormed Omaha Beach on D-Day, roughly 8.2% were fatally wounded. What does all this mean? It means that even if you go off to war, your odds of survival will never be lower than they were when you lived in your mother's womb. For a visual comparison, consider the graph below: This past Wednesday, I had the opportunity to speak to the youth group where my own 8th and 9th-grade children attend. I shared much of the information above and connected it to the central premise of my book Love the Least. Afterwards, I heard from the father of a student in attendance who was upset that he hadn’t been given the opportunity to keep his son home that night. “I understand that abortion is an important issue,” he told me, “but my son is freaking out about it.”

This certainly isn't the first time I've heard such concerns, but my opinion is this. His son should be freaking out about abortion. We all should be. The fact that we adults, many of whom count ourselves the ambassadors of Christ, can go about our daily business with nary a thought to our unborn neighbors, who are dying each day en masse, is a testimony to just how desensitized we’ve become. When children hear about abortion for the first time, they're horrified and dumbfounded. How can this be happening?! Tragically, by the time they reach college age, far too many have been conditioned to accept the unthinkable. Far too many will follow the lead of their Christian parents—who are nowhere near as freaked out by abortion as we should be.