Abort73.com > Abort73 Blog > The Monstrosity of Abortion in the Frankenstein Chronicles

The Monstrosity of Abortion in the Frankenstein Chronicles 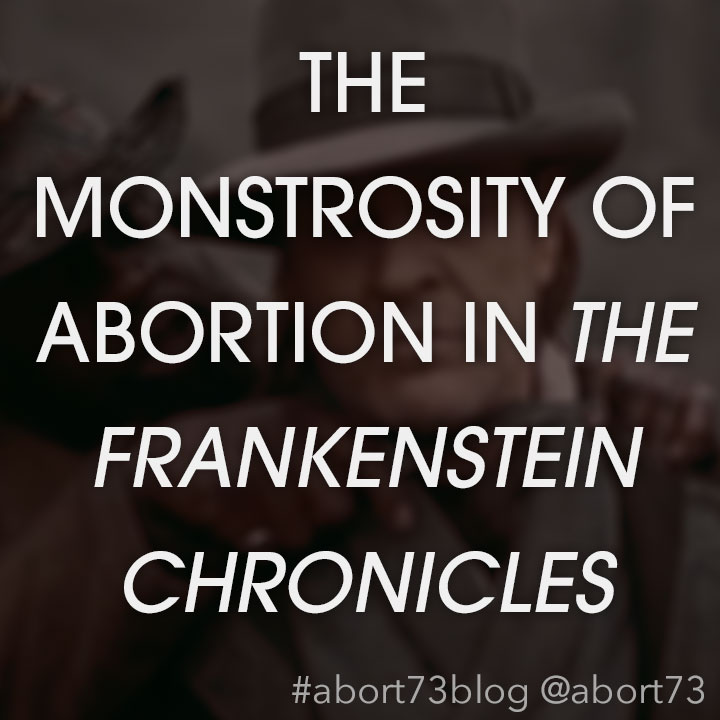 Towards the end of the novel Frankenstein, Mary Shelley’s iconic monster refers to himself as an “abortion”—something “to be spurned at, and kicked, and trampled on.” It’s an interesting word choice for this nameless monstrosity. I have never read Frankenstein, but I did recently watch the first two seasons of The Frankenstein Chronicles, which connect to abortion in a more literal and straightforward way. I was unaware of the connection when I started watching, which makes this the second time a Netflix production has unexpectedly confronted me with the issue of abortion. Blue Jay was the other. In both cases, I heartily applaud the filmmakers.

As a word of caution, The Frankenstein Chronicles are exceedingly dark and violent. Then again, so is abortion, which is one of the reasons it’s so difficult to incorporate into broadly-accessible works of fiction. Generally, all we get is the smug pro-choice sentimentality of Hollywood (think, The Cider House Rules), or the over-the-top religiosity of “faith-based” fare. The Frankenstein Chronicles offer neither. Set in early 19th-century London, the narrative opens upon the body of a young girl which has washed ashore from the Thames. On closer inspection, we realize that her body is actually a surgically-assembled amalgamation of eight different children. John Marlott, the river patrol captain whose men made the discovery, is quietly tasked with finding the sadistic culprit, before public hysteria breaks out.

If you have any interest in watching the series, read no further—unless you don’t mind spoilers. Without diving too deeply into the plot, the suspicions of Marlott come to land upon two high-profile surgeons. Each is arrogant and morally spurious. Juxtaposed against the pomposity of these suspected “butchers” is the philanthropic idealism of Daniel Hervey, a holistic physician who cares for the diseased and displaced. When a pregnant runaway is rescued by Marlott, he entrusts her to Hervey’s care—fearful that she might otherwise harm her unborn child. Hervey, however, is not what he seems. When Flora, the young woman in question, discovers Hervey’s collection of herbal medicines, she asks if he has anything “for getting rid of babies.” After asking if that’s what she really wants, Dr. Hervey proves willing to oblige.

At first blush, it looks as if the filmmakers are following the lead of The Cider House Rules, setting Hervey up to be a benevolent physician who cares for orphans and “delivers” impoverished young women through clandestine abortions. In The Cider House Rules, the decisive abortion was performed on a young woman who’d been raped by her own father. In The Frankenstein Chronicles, the young woman had been drugged and raped by one of the suspected surgeons. You see the pattern. Soften the moral repugnance that surrounds abortion by introducing rape or incest. It’s a common diversionary tactic, but in this case, the standard pro-choice narrative is turned on its head—and it starts with Joseph Nightingale.

Joseph Nightingale is a black constable in an almost exclusively-white London. He is the least-regarded man on the force and is assigned to assist in Marlott’s investigation for that very reason. The powers that be, it seems, want Marlott to fail. When Flora was first discovered to be pregnant, it was Nightingale who pleaded with her to keep the baby. “It’s a life!” he insisted, offering to take care of Flora and the baby himself as a deterrent to abortion. When Flora returns to them from Dr. Hervey’s, it is Nightingale who is immediately suspicious. “He helped you get rid of it, didn’t he?” After being asked why he cares, Nightingale presciently responds, “That child’s fate could have been yours or mine.” Implicit in this response is the realization that he as a black man and she as an “unwanted” orphan are precisely the types of people abortion is most likely to eliminate.

The second fly in the pro-choice ointment comes in the form of Lady Hervey, Dr. Hervey’s noble but naive sister who is ignorant of his foray into abortion. Speaking of the “miscarriage” around the dinner table, it is suggested that losing the baby was an act of providence. “Or a blessing in disguise,” as Dr. Hervey put it. “Don’t believe that, Daniel,” his sister immediately counters. “Suffer the little children, and forbid them not to come unto me.” I was particularly struck by that response because I myself have been contemplating Matthew 19:14’s implications with regard to abortion, but I’ve never heard anyone else apply it as such. When Marlott reveals to Lady Hervey towards the end of season one that her brother is an abortionist—“steeped in blood,” she refuses to believe it. She could believe almost anything of her brother, it seems, except for something as monstrous as that.

The third domino to fall is Flora herself. Defiant and self-assured in procuring her abortion, she finds afterwards that she has lost the will to live. “I killed my child,” she finally confesses to Nightingale. “I deserve to die.” Though that is precisely what Nightingale had feared, he again responded with compassion and grace. “All life is precious,” he asserted. “Yours too.” So instead of crafting a narrative in which support for abortion comes from women, minorities, and those who’ve already aborted, The Frankenstein Chronicles flip the script. The support for abortion comes exclusively from the white male establishment, and its opposition comes almost entirely from those on the outside looking in. In season two, after Marlott befriends a black woman who runs a traveling circus, she confesses the following: “I can’t help myself, Mr. Marlott. The unwanted, the freaks, I’d save them all if I could.”

At the end of season one, when Marlott believes the case to have finally been solved, he confronts Hervey about his work as an abortionist. “It’s a criminal act to rob an unborn child of life, my lord. At the very least, your practice will be closed. You, yourself. subject to prosecution.” When he asks Hervey how he can justify himself, this is Hervey’s response: “I believe [Flora’s] existence would have been blighted by the birth of that child, as did she. She would have died, homeless and starving—a vagrant or a prostitute. Along with her unloved offspring. You call that life? I call it suffering.” As abortion supporters are prone to do, Hervey provided a detached utilitarian explantation for why abortion is necessary. He doesn’t bother with a moral defense, probably since there isn’t one. The filmmakers could have left it at that and I would have felt indebted to them, but they had one more shoe to drop.

You see, Dr. Hervey himself—the gentle and mild-mannered “physician”—turned out to be the Frankensteinian psychopath. He was the one who was both filling and looting the graveyards in a desperate attempt to reanimate lifeless corpses. When he finally succeeded in bringing a man back to life, this is the euphoric explanation he offers his thunderstruck vicim:

When I terminated that poor girl’s child, I was harvesting raw material for my work. The substance that brought you back from the grave came from her fetus. And thousands of others like it. It was in that tincture I gave you. That was your first encounter. My first creatures were children… I wanted them to have the chance to grow, but they couldn’t survive the trauma I had inflicted upon them. Not for long, anyway. Something else was needed. Something stronger.

If The Frankenstein Chronicles, which were released in 2015, had come out even a year or two earlier, perhaps we would have scoffed at the macabre absurdity of such a premise. Are we really to believe that someone would harvest the body parts of aborted fetuses as a means of stimulating the advancement of human evolution? What kind of monster would do such a thing? And yet we need look no further than Planned Parenthood—which was exposed that same year for their dealings in the fetal body part business. “All of them died for science,” the fictional Dr. Hervey tells us. “I make no apologies.” Neither, of course, does Planned Parenthood.

It is Frederick Dipple, a season two addition, who succinctly encapsulates the belief system which drove Daniel Hervey. “There is no God,” he assures John Marlott. “As soon as you grasp that, anything is possible.” I suspect that most in the abortion industry would concur. But whereas Daniel Hervey dissected dead human beings in the barbaric effort to create life, abortionists dissect living human beings in the barbaric effort to procure death. Which do you think is worse? One premise has become an iconic fixture of the horror genre. The other has become an everyday occurrence within the pristine walls of Planned Parenthood. The Cider House Rules may have made their abortionist into a benign hero, but The Frankenstein Chronicles made theirs into something much closer to the truth.