The Hand of God / Bernard Nathanson

The Hand of God / Bernard Nathanson 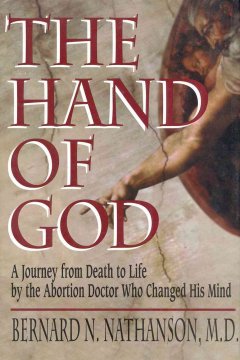 Fifteen years after the publication of Aborting America, Bernard Nathanson's second book hit the shelves. The Hand of God offers a much more personal, soul-exposing glimpse at the doctor who was so instrumental in the legalization of abortion in America. And by the time his second book was released in 1996, a dramatic spiritual shift had taken place as well. In Dr. Nathanson's own words:

The usual and customary progression is: Belief in God and His splendid gift of life leads the believer to defend it–and to become pro-life. With me, it was just the opposite: Perversely, I journeyed from being pro-life to belief in God. I was not seeking anything spiritual; my desires have been–for the most part–earthly and of the flesh, my goals concrete and tangible–and readily liquefiable into cash. To make matters worse, I was openly contemptuous of all this as a stiff-backed Jewish atheist…
Getting from there to here wasn't easy. I went through a ten-year "transitional time"–perhaps 1978-1988–when I felt the burden of sin growing heavier and more insistent. It was as if the contents of the baggage of my life were mysteriously absorbed in some metaphysical moisture, making them bulkier, heavier, more weighty, and more impossible to bear…

I have performed many thousands of abortions on innocent children, and I had failed those whom I loved. Of my second and third marriages, I cannot write in any detail–it is still so painful for me. Suffice it to say that both of my spouses, though neither were churchgoers when we met, had retained a core of innocence from their Protestant childhoods that kept them pristine and curiously innocent–at least until I got my hands on them…

At the time of this writing, I have already tried the traditional panoply of secular remedies: alcohol, tranquilizers, self-help books, counseling. I had even indulged myself in four years of psychoanalysis in the early 1960s…Then I attended an action by Operation Rescue against Planned Parenthood in New York City in 1989… I joined the legion, approximately twelve hundred demonstrators… and proceeded with them by subway and foot to the clinic on Second Avenue and Twenty-first Street… They prayed, they supported and encouraged each other, they sang hymns of joy, and they constantly reminded each other of the absolute prohibition against violence. It was, I suppose the sheer intensity of the love and prayer that astonished me: They prayed for the unborn babies, for the confused and frightened pregnant women, and for the doctors and nurses in the clinic. They even prayed for the police and the media who were covering the event… for the first time in my entire adult life, I began to entertain seriously the notion of God–a god who problematically had led me through the proverbial circles of hell, only to show me the way to redemption and mercy through His grace. The thought violated every eighteenth-century certainty I had cherished; it instantly converted my past into a vile bog of sin and evil; it indicted me and convicted me of high crimes against those who had loved me, and against those whom I did not even know; and simultaneously–miraculously–it held out a shimmering sliver of Hope to me, in the growing belief that Someone had died for my sins and my evil two millennia ago. (187-194)

I cried suddenly and uncontrollably when I read that last sentence, and I don't exactly know why. I suppose I was overcome by the reminder that Christ died for sinners. Oh, the miracle of the gospel. I'd do well enough to end with that, but there are a few more comments worth sharing, particularly his account of the first time he actually saw what abortion does to the most helpless members of the human community:

By 1984… I had begun to ask myself more questions about abortion: What actually goes on in an abortion? I had done many, but abortion is a blind procedure. The doctor does not see what he is doing. He puts an instrument into a uterus and he turns on a motor, and a suction machines goes on and something is vacuumed out; it ends up as a little pile of meat in a gauze bag. I wanted to know what happened, so in 1984 I said to a friend of mine, who was doing fifteen or maybe twenty abortions a day, "Look, do me a favor, Jay. Next Saturday, when you are doing all these abortions, put an ultrasound device on the mother and tape it for me."

He did, and when he looked at the tapes with me in an editing studio, he was so affected that he never did another abortion. I, though I had not done an abortion in five years, was shaken to the very roots of my soul by what I saw. (140-141)

Dr. Nathanson says this of ultrasound's remarkable impact on women seeking an abortion:

About ten years ago, an article in the [New England Journal of Medicine] reported that when ten pregnant women came to an abortion clinic and were shown ultrasound pictures of the fetus before the abortion, only one went through with the abortion. Nine left the clinic pregnant. That is how powerful the bonding is. I found myself bonding with the unborn. (125-126)

In the book, Dr. Nathanson confesses that two of his own children were killed by abortion, one at his one hands. He writes this of the first one:

I am some fifty years older now, but the experience is as fresh and quick in my mind as [if it happened this morning]. Although for a brief period in the immediate aftermath we huddled together as co-conspirators in an unnameable crime, eventually we drifted apart. I am sure–despite her brave face, her loyalty and love, her pragmatic evaluation of the whole sorrowful gestalt–I am sure that in some melancholy corridor of her mind lurked the questions: Why didn't he marry me? Why couldn't we have had this baby? Why should I have had to imperil my life and my future children for the sake of his convenience and academic schedule? … And even at this remove–fifty-one years and counting–I am aware that I could have had grandchildren by now with this loving, beautiful woman. Lessons? Too many and too sad to rehash here. Suffice to to say that it served as my introductory excursion into the satanic world of abortion. (57-58)

This is his tragic description of how he managed to abort his own child:

In the mid-sixties I impregnated a woman who loved me very much. She begged to keep the pregnancy, to have our child. I was just out of residency in obstetrics and gynecology, and was beginning to build a formidable practice in that specialty. I had already had two ruined marriages, both destroyed largely by my own selfish narcissism and inability to love… I saw no way out of the situation, told her that I would not marry her and that I could not at that time afford to support a child (an egregious example of the coercion exercised by males in the abortion tragedy), and I not only demanded that she terminate the pregnancy as a condition of maintaining our relationship, but also coolly informed her that since I was one of the most skilled practitioners of the art, I myself would do the abortion. And I did… [at the time], I had no feelings aside from the sense of accomplishment, the pride of expertise. On inspecting the contents of the bag I felt only the satisfaction of knowing that I had done a thorough job… and that, dear reader, is the mentality of the abortionist: another job well done, another demonstration of the moral neutrality of advanced technology in the hands of the amoral. (58, 60)

I'll close with Dr. Nathanson's wrestlings over how he and so many others could have been so blind to the intrinsic evil of abortion. He writes:

As I look back across the twenty-five years separating me from that revolting extravaganza playing itself out on the bodies of pregnant women and their slaughtered babies, I am struck by the uncritical nature of the task we had set for ourselves, by the moral and spiritual vacuum at the core of this fantastic operation, by our unquestioned certainty of the high level of moral rectitude on which we operated. And yet, the thing was so obviously sordid. Why couldn't we make the link between the ethical and the moral, between the shoddy practices and the shabby practitioners, the evident greed and callous motives, between the crassness of the enterprise and those involved in it, between all these ethical indicators and the grotesque immorality of the act itself? 106

With a combination of money and an appeal to political duty... I had replaced a gaggle of medical rogues and ruffians with a spotless, respectable collection of superbly trained, highly competent physicians--and these new recruits continued to carry out the same grisly task with no medical indication or excuse at all. The rusting, failing medical machinery had been replaced with a shiny, new, massive apparatus--but the morality of what we were engaged in was altogether unchanged. 108

Though these comments only scratch the surface of all that is included in the book, they are a massive blow to the institution of abortion. They come not from an outsider, not from someone speculating at what may be happening behind closed doors. They come from the man once known as "the abortion king," the one-time director of the largest abortion clinic in America, a man who "[knew] the abortion issue as perhaps no else." We would do well to listen.