The Apostasy of Silence: Lessons from Dietrich Bonhoeffer 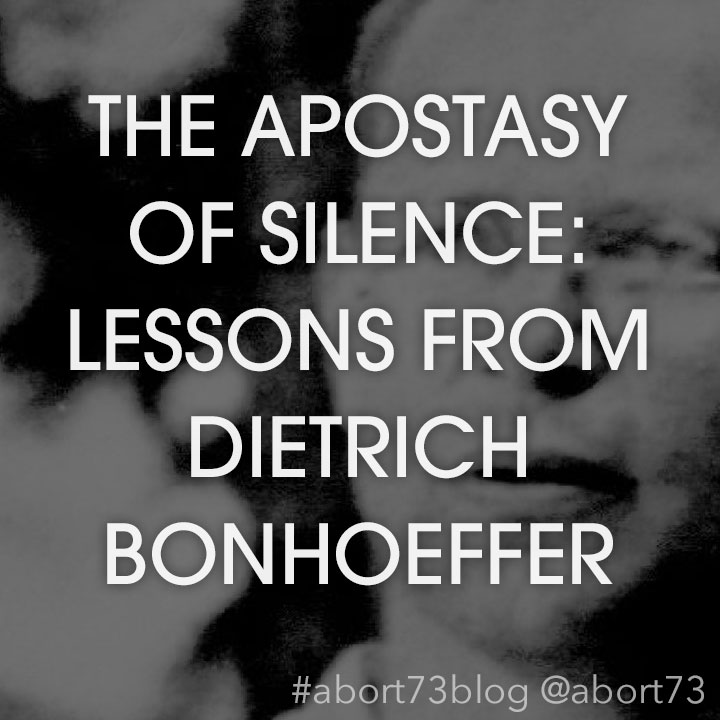 After finishing Eric Metaxas' biography on Dietrich Bonhoeffer, it occurred to me that though I'd long admired the German pastor and martyr, I'd never actually read any of his published works. To remedy that, I began with Life Together—on the recommendation of Charles Marsh—and followed it up with Ethics. The Cost of Discipleship is still on my "to read" list, but the first two books have given me plenty to think about in the meantime.

Even before reading anything that Bonhoeffer had written, I already regarded him as one of the most ethically-credible Christians in modern history. Why? Because Bonhoeffer was a young German pastor, from an esteemed and influential family, who nonetheless opposed Nazism to the death. How many other clergymen can boast membership in that sacred fraternity? While the church all around him acquiesced to the maniacal demands of their Führer, and found all number of ways to justify their silence, Bonhoeffer came to a profound conclusion.

What do you think about such an assertion? Can a church that checks all the right theological boxes, a church with all of its doctrinal ducks in a row—so to speak—be accused of outright apostasy for failing to defend the victims of government-sanctioned homicide? Underlying this question is a centuries-old debate. Is God more concerned about what we believe or what we do? So far as Bonhoeffer was concerned, the entire question was nonsensical. In his mind, what a man believes is inseparably linked to what a man does—as evidenced by the following excerpt from Ethics:

[Bonhoeffer] knew something was deeply wrong with the church as it then existed, and not just with the Reichskirche and the German Christians, but with the best of the church, with the Confessing Church, and with the current form of Christianity in Germany in general. He felt that what was especially missing from the life of Christians in Germany was the day-to-day reality of dying to self, of following Christ with every ounce of one's being in every moment, in every part of one's life.

What exactly was the church guilty of? In making confession on behalf of the church, Bonhoeffer wrote:

She was silent when she should have cried out because the blood of the innocent was crying aloud to heaven. She has failed to speak the right word in the right way and at the right time... she has not raised her voice on behalf of the victims and has not found ways to hasten to their aid. She is guilty of the deaths of the weakest and most defenseless brothers of Jesus Christ.

The church did not actively kill the innocent and defenseless in Germany, but Bonhoeffer still counted the church guilty of their deaths. And Jesus almost certainly did too. This, after all, is the takeaway from his teaching on the judgment of the sheep and the goats: Whatever we fail to do in the aid and defense of the "least of these" among us, we fail to do for Jesus Christ. To exclude or ignore "the weak and insignificant, the seemingly useless people," Bonhoeffer wrote in Life Together, "may actually mean the exclusion of Christ."

In practice, the church's failure to stand for their Jewish neighbors was almost certainly built on fear, but it was publicly justified on the tired assertion that such engagement was beyond the church's purview—as if the church's only obligation to the world was to the preach the gospel. "We are apt these days," Bonhoeffer wrote, "to reply too quickly that the one real service to our neighbor is to minister to him the Word of God... We can go monstrously wrong here if we overlook a number of other things." It was not the failure to evangelize, after all, that sent the church-going "goats" of Matthew 25 into eternal punishment. It was the failure to come to the physical aid of the ostracized and oppressed.

Paraphrasing a line of reasoning from Ethics, Metaxas writes, "It is sometimes not enough to help those crushed by the evil actions of a state; at some point the church must directly take action against the state to stop it from perpetrating evil." What was it that gave Bonhoeffer the courage to act with such fortitude when so many others in his position were mired in fear and uncertainty? By all accounts, it was his unwavering faith in the grace of God though Jesus Christ. Because Bonhoeffer felt so secure in the imputed righteousness of Christ, he was free to risk both his life and his "innocence." For many in the German church, it wasn't just the fear of death which stayed their hand. It was the fear of somehow incurring personal guilt, the fear of doing something wrong in the service of doing right. In reaction to such thinking, Bonhoeffer wrote:

Some who seek to escape from taking a stand publicly find a place of refuge in a private virtuousness. Such a man does not steal. He does not commit murder. He does not commit adultery. Within the limits of his powers he does good. But in his voluntary renunciation of publicity he knows how to remain punctiliously within the permitted bounds which preserve him from involvement in conflict. He must be blind and deaf to the wrongs which surround him. It is only at the price of an act of self-deception that he can safeguard his private blamelessness against contamination through responsible action in the world. Whatever he may do, that which he omits to do will give him no peace. Either this disquiet will destroy him or he will become the most hypocritical of Pharisees.

There are precious few Christians who are revered by the world at large. In some ways, this is understandable. In other ways, it's an indictment against the insulated spirituality of the church. Dietrich Bonhoeffer managed to break through this insulation, but not without cost. As Mataxas explains, "Bonhoeffer advocated a Christianity that seemed too worldly for traditional Lutheran conservatives and too pietistic for theological liberals. He was too much something for everyone, so both sides misunderstood and criticized him." Though the church continues to wrestle with Dietrich Bonhoeffer, his global legacy is fairly impeccable.

The reason Bonhoeffer has so much credibility outside the church is because he broke ranks to fight against the very thing that is now regarded as the world's most quintessential expression of evil—and he did so as a non-Jewish German. Like Martin Luther King, Jr. who would be profoundly influenced by his German predecessor, Dietrich Bonhoeffer's ethical convictions had life-and-death implications. Unlike Dr. King, Dietrich Bonhoeffer was not a member of the victim class, and his execution was sanctioned by the state. Bonhoeffer was killed, not for standing in defense of his own people, but for standing in defense of a neighbor he'd been culturally-programmed to despise. That almost never happens, which is why Bonhoeffer's ethical credentials are so pristine.

For me, the natural question then becomes, what would Dietrich Bonhoeffer have said of abortion? Would he have condemned the violent practice, or chafed at the assertion that abortion is somehow comparable to the Holocaust? Remarkably, it's not a question we have to speculate on. Though Dietrich Bonhoeffer would die in 1945—decades before abortion was broadly legalized around the globe—he was, as ever, remarkably prescient. The following comes from his book on ethics:

Destruction of the embryo in the mother’s womb is a violation of the right to live which God has bestowed upon this nascent life. To raise the question whether we are here concerned already with a human being or not is merely to confuse the issue. The simple fact is that God certainly intended to create a human being and that this nascent human being has been deliberately deprived of his life. And that is nothing but murder.

With regard to abortion, the life of Dietrich Bonhoeffer has a word to both the church and the world. To the church it says, if you do not hasten to the aid of the weak and defenseless, the marginalized and oppressed, then you are not really the church. You have no part in the blood of Christ. "To delay or fail to make decisions," Bonhoeffer maintained, "[is] more sinful than to make wrong decisions out of faith and love."

To the world, the life of Dietrich Bonhoeffer says this: Abortion is murder. It is a violation of the most basic human right. "The first right of natural life consists in the safeguarding of the life of the body against arbitrary killing... The idea of destroying a life which [lacks] social usefulness is one which springs from weakness, not from strength."

If we are going to celebrate the moral fortitude of Dietrich Bonhoeffer, and we should, then we must be willing to emulate his legacy within our own historic context. Heaping moral outrage upon a vanquished enemy has little social value. Our real work is to identify and expose the politically-correct atrocities of today. Nazism is no longer the world's most copious hangman. Abortion is—so what are we going to do about it? "The error of the Pharisees," Bonhoeffer argued, "did not lie in their extremely strict insistence on the necessity for action, but rather in their failure to act." That is what Christ condemned them for. They said, but did not do—and many of us are now doing (or not doing!) the same.