The Advantage of Disadvantages 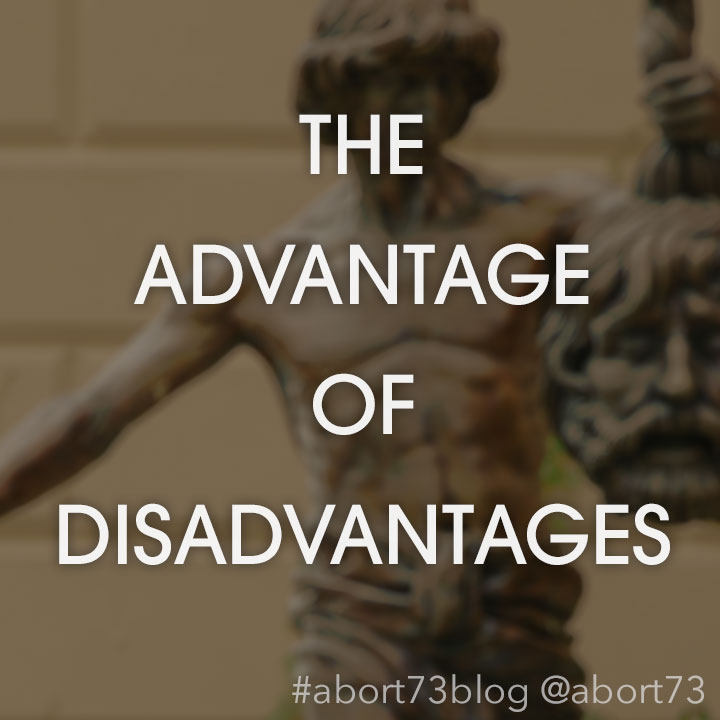 In my last post, I talked about the significant social and economic disadvantages of growing up in a single-parent home. The basic premise was this: single parenthood is infinitely preferable to abortion, but it is almost never preferable to living with a mother and father. The article was not meant to be an indictment against single moms, many of whom become so against their will. Rather, it was intended to be a word of caution for anyone who would simply choose single parenthood over getting married or placing for adoption.

As things turned out, the completion of that post directly preceded my reading of Malcolm Gladwell's 2015 book, David and Goliath. If you're not familiar with Malcolm Gladwell, you should be. He's made a career out of challenging long-held cultural assumptions, and this volume is a worthy addition to his growing canon. Using Samuel's famed narrative as a starting point, Gladwell argues that the Sunday School reading of David and Goliath is almost entirely wrong. It highlights David's obvious disadvantages—namely his lack of size and strength—without acknowledging the one physical advantage he had. David, the Bible tells us, was incredibly skilled with a weapon that could kill a man at distance.

Because David refused to engage Goliath on the Philistine's own terms—in hand-to-hand combat—David was able to mitigate the disadvantages he'd inherited. Even his skill with the sling largely owed to his being the youngest and most-neglected of Jesse's sons. Because David's older brothers had lived a more-advantaged life than their young sibling, they never developed the faith, skill, and ingenuity that precipitated David's victory over Goliath. Gladwell writes:

As the book continues, Gladwell turns his attention to childhood development, where he shares a rather remarkable revelation. It turns out that many of the same factors that make a child more statistically likely to drop out of school, start using drugs, or wind up in jail also make that child more statistically likely to accomplish extraordinary things. By the same token, a surprisingly high number of gifted and socially-advantaged children fail to live up to their promise as adults. Psychologist Dean Simonton suggests these children have “inherited an excessive amount of psychological health.” He states:

Gifted children and child prodigies seem most likely to emerge in highly supportive family conditions. In contrast, geniuses have a perverse tendency of growing up in more adverse conditions.

When it comes to familial health and happiness, money is only an advantage up to a certain point. If a family's income goes too far beyond that point—which scholars estimate to be around $75,000 per year—it actually begins to be a disadvantage. Extreme wealth, after all, has a nasty habit of destroying the children who grow up in it. And even when it doesn't, it rarely promotes economy, determination, and self-reliance—qualities that the most successful people tend to have in spades. As Gladwell puts it, "Wealth contains the seeds of its own destruction."

Even more interesting, Gladwell points his readers to a series of studies that examines the parental-profiles of the most influential people in English-speaking history. In America and Great Britain alike, a remarkably disproportionate number of these world beaters lost a parent early in life. More than a quarter of all U.S. presidents were bereaved of a father while they were still young, and the percentage is even higher for British prime ministers. "If you take away a mother or a father," Gladwell posits, "you cause suffering and despair. But one time in ten, out of that despair rises an indomitable force."

How does all of this connect to abortion? First, it reminds us that childhood trauma is never a perfect predictor of future outcomes. Growing up in poverty or growing up without a father are not life sentences. Even disabilities can work for the good of those constrained to live with them. Case in point, "an extraordinarily high" number of successful entrepreneurs are dyslexic. "There are two possible interpretations for this fact," Gladwell tells us. Either these men and women are so brilliant that they've succeeded despite their disability, OR they have succeeded because of their disability.

In many ways, severe childhood adversity is like high-stakes poker. Both the risk and potential for reward are extremely high. Presidents and prime ministers may have a remarkably high incidence of childhood trauma, but so do prisoners. What's the takeaway then? Should we ever wish this kind of adversity upon the children we love? Gladwell answers this way:

The question of what any of us would wish on our children is the wrong question, isn’t it? The right question is whether we as a society need people who have emerged from some kind of trauma—and the answer is that we plainly do.

For the single-mothers who were discouraged by my last post, take hope. Childhood adversity is like a massive ocean wave. Yes, it's dangerous and threatening, but it does not crush everyone in its path. For some, it helps buoy them to tremendous heights. In large measure, the thing that separates one outcome from the other is you. So keep standing in the gap for your children; do not lose heart. Help them find the hidden advantages of disadvantages. Even in the absence of a father, untold numbers of children have risen to tremendous heights and called their mothers blessed.