With last week’s release of the new Abort 73 (Huskies) T-shirts and tank-tops—so named for the UCONN jerseys they were inspired by—it’s a good time to revisit the underlying purpose of every Abort73 shirt in existence—all 50,000 of them! From the very beginning, Abort73 has been an attempt to think outside the “pro-life” box. That is especially true of our shirts, which have long been our primary means of advertising. Abort73 T-shirts are not meant to be educational or inspirational. They’re meant to introduce people to Abort73.com. Why? Because the Abort73 website does what no pro-life T-shirt comes close to doing. It educates and informs. It answers objections. It takes people beyond slogans, stereotypes and party-line sound bites. It provides evidence and documentation. Abort73.com has the potential to change the way someone thinks about abortion. T-shirts do not.

Of course, T-shirts do a lot of things that websites cannot—like walk the streets and deliver an unsolicited message. Their ability to infiltrate campuses and communities is why Abort73 continues to invest so heavily in their production. But here’s the problem. The Abort73 shirts that should be the most popular tend to be the least popular, and the Abort73 shirts that should be the least popular tend to be the most popular. I call it the Moneyball effect. If you’re not familiar with the movie (or the book it was based upon), Moneyballtells the mostly true story of the 2002 Oakland A’s. Central to the drama is the ongoing tug-of-war between the on-field manager, Art Howe, and the general manager, Billy Beane.

Because the Oakland A’s can’t afford the payroll of their big-market rivals, Beane embraced a less-conventional approach to player evaluation—one that quickly drew the ire of the A’s head scout. Beane’s rationale was simple: “There are rich teams, and there are poor teams. Then there’s 50 feet of crap, and then there’s us… If we try to play like the Yankees in here, we will lose to the Yankees out there.” Channeling his inner Steve Jobs, Beane declared that, “We’ve got to think differently.” With the help of his humorous—though mostly fictitious—wunderkind, Beane was able to get the “right” players. What he couldn’t do—at least initially—was get Art Howe to play them the “right” way.

Like the A’s, Abort73 is a small-market “team.” We can’t afford to engage in business as usual. We don’t have the time or the money—so we take a less conventional approach. The relative success of that approach is largely determined by how many people are willing to wear Abort73 shirts and how many people are not. But it goes even deeper than that. The Abort73 catalogue began with three shirt designs. Each one included a stylized variant of “Abort73.com”—and nothing else. I would soon learn however that pro-life shirt-wearers don’t emotionally connect to shirts like that. They want a “message.” They want something clever and creative—and so I compromised. In the years that have followed, most Abort73 shirts have been a hybrid—a combination of “message” and URL. Some of them have been wildly popular. I don’t know if any of them have been wildly effective—or at least as effective as they could have been.

To continue the Moneyball analogy—think of Abort73’s “message” shirts as the high-profile players that hit lots of home runs but are significantly overvalued, and think of the “plain” Abort73 shirts as the under-the-radar guys who bring tremendous value for little cost. It’s easy to be enamored with the more glamorous players (and shirts), but shouldn’t we care more about price and production? Of course, the production cost of a T-shirt doesn’t vary much from one design to the next, but what about the hidden cost of burying “Abort73” beneath verbiage that isn’t nearly as important by comparison? At one point in Moneyball, Beane laments to Howe, ”It doesn't matter what moves I make if you don't play the team the way they're designed to be played.” To borrow from that theme—and forgive me for casting myself as Brad Pitt and you as Philip Seymour Hoffman—it doesn’t matter what shirts I design if you don’t wear the shirts that are the most effective.

I realize that effectiveness is subjective—since I can’t measure the actual influence each shirt has—but so long as our objective is clearly defined, we can make some reasonable speculations. Pictured below is our best selling design of the year (#evilignored) alongside our worst selling design of the year (#huskies). Knowing that introducing people to the Abort73 website is the ultimate objective of every Abort73 T-shirt, which shirt do you think more effectively does that? Which T-shirt is more likely to prompt the question, “What is Abort73?” 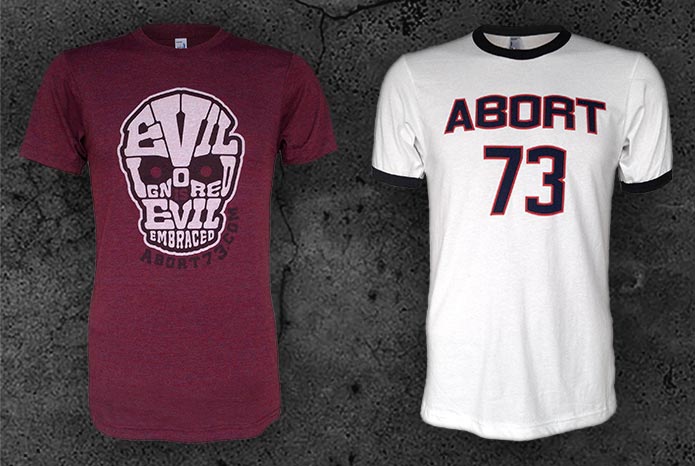 My intention here is not to denigrate the Evil Ignored T-shirt or any of our “message” T’s. I designed them. I like them. I’m glad people wear them. Though I believe our big and bold “Abort73” designs are more theoretically effective, I realize that our “message” T’s have introduced far more people to Abort73.com—for the simple fact that they’ve outsold the others by a landslide. No, my intention in all this is to simply encourage a more cerebral, less emotional approach to pro-life T-shirt wearing—a willingness to embrace a strategy that might at first seem counterintuitive. In the ongoing battle between Billy Beane and Art Howe, Beane finally traded away Howe’s beloved Carlos Peña—forcing him to play Scott Hatteberg at first base. At this point, I have no intention of “trading away” all of our message T’s. Instead, I’m hoping that by reminding you of the big picture, you’ll wind up embracing our “Moneyball” designs all on your own. I understand the desire to wear a pro-life message, and I don’t discount that. I would simply argue that the most strategically pro-life message of all reads like this: “Abort73(.com).”