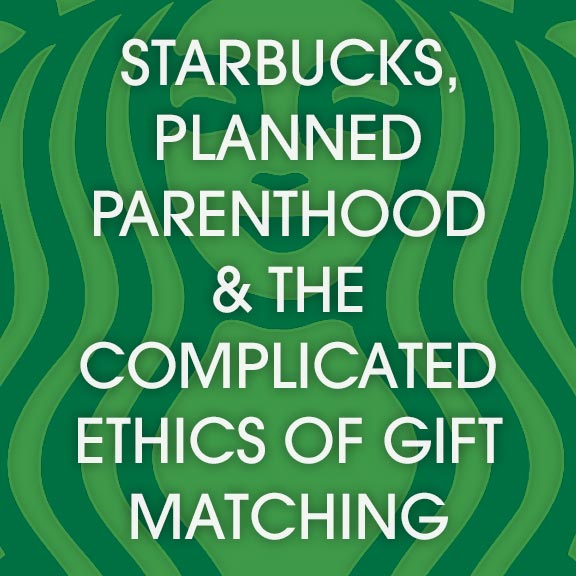 Last month, the Heritage Foundation’s digital news platform—The Daily Signal—published a list of companies that donate to Planned Parenthood. There are some big names on the list including AT&T (my phone carrier), Bank of America (my bank), and Adobe (the software company that’s behind everything I’ve ever coded or designed for Abort73). Number 32 on the list is Starbucks—and for some reason, they seem to be absorbing most of the pro-life vitriol on the subject. Shortly after the list was published, LifeNews posted the editorial, “Why I Will Never Drink Another Starbucks Coffee Again,” and lots of pro-lifers are following suit. When I posted a picture on Saturday of a couple wearing our #ChooseWisely shirts—and sipping Starbucks—these were some of the comments that followed:

They’re drinking Starbucks who is a huge supporter of planned parenthood. This is not choosing wisely.

Well, your [sic] sucking on Starbucks in the photo one of the biggest #PlannedParenthood #abortion supporters. Why?

That's like going to a save endangered animals rally wearing a fur coat.

Reading those responses, I knew I’d have to do some digging. Is going to Starbucks really the moral equivalent of having an abortion? That’s essentially what the last comment is implying. Though Starbucks has little appeal to me as a non-coffee-drinker, I’m there at least once a month with my wife. Have we compromised ourselves by association? To answer that, there are two questions worth considering. First, does my opposition to abortion forbid me from doing business with a company that supports abortion? Second, is it accurate to call Starbucks a supporter of abortion? So far as I can tell, the answer to both questions is an emphatic “no.” Because the second question speaks more directly to the Starbucks debate, that's the one I'm going to deal with today.

The article I mentioned at the outset notes that approximately one quarter of Planned Parenthood’s $1.3 billion in annual revenue comes from private contributions. It also notes that the list of companies was provided by 2nd Vote—an organization that rates corporations as liberal, conservative, or something in between—based upon applicable donations, policies, and public advocacy. Each company is given a separate score for the following categories: Marriage, Environment, 2nd Amendment Rights, and Pro-Life. As an aside, I don’t think we do any favors to abortion-vulnerable children by lumping these issues together. Returning to the subject at hand, 2nd Vote gives Starbucks a “1” in the “Pro-Life” category, which is the worst score possible. Starbucks received that score because their 2013 Form 990 shows that the Starbucks Foundation donated to Planned Parenthood. Though that may seem like conclusive proof, there is more to consider.

If you’re like me, there are two things you’d like to know about Starbucks’ donation to Planned Parenthood. How much was it? And who initiated it? Thankfully, the 2nd Vote page links to Starbucks’ 990—for anyone with the patience to wade through its non-searchable text! Having now pored over the 22-page list, I can fill in some of the blanks. But before I do, I want you to think of a number in your head. When you hear that Starbucks is a “huge supporter of Planned Parenthood,” how much money do you envision them donating? If you need a reference point, Starbucks revenue in 2013 was $15 billion, and it donated $10 million of that through the Starbucks Foundation. That means Starbucks donates about $1 for every $1,500 in revenue. So, if you spend $1,500 at Starbucks each year—which plenty of people do—$1 of your $1,500 spend will be donated to charity. Now back to the question. How much of the $10 million that Starbucks donated in 2013 do you think Planned Parenthood received?

Drum roll please… The Starbucks Foundation made four donations to Planned Parenthood in 2013 for a grand total of $1,225. Is that more or less than the number you had in your head? The charity listed directly below Planned Parenthood is Plymouth Missionary Church in Indiana. They received $1,500. By my count, Starbucks donated $20,746 to local churches in 2013, and it’s entirely possible that I missed a few. Here are some of the other surprising recipients on the list—all of whom received more in donations than Planned Parenthood:

The Salvation Army ($1,000), Campus Crusade for Christ ($1,100), and Children’s Hunger Fund ($500) were also on the list. How is it possible, you ask, for an organization as “liberal” as Starbucks to give far more to local churches than it does to Planned Parenthood? That takes us to the next question—who initiated the donation? The reason there doesn’t seem to be any rhyme or reason to Starbucks’ corporate giving is because it is entirely driven by employees—resulting in a hodgepodge of socially liberal and socially conservative organizations. Starbucks is a public company. Its mechanism for maintaining what might be called “charitable neutrality” is to simply defer their giving decisions to individual employees—or “partners” as Starbucks calls them. Of course, in order for a partner to direct corporate giving, that partner must first donate to the charity out of his or her own pocket.

As much as we might like a giant public corporation like Starbucks to champion the pro-life agenda, that’s a mere pipe-dream at this point in history. Perhaps we could pressure Starbucks into scrapping its gift-matching program altogether, but consider the alternative. Were that to happen, then all of Starbucks’ charitable giving would be directed by its board of directors—who would likely direct the entirety of available funds to their pet charities. Would that be a net gain for abortion-vulnerable children? I doubt it.

I will note at this point that I didn’t find any pro-life charities listed in Starbucks’ 990. Perhaps Starbucks is blocking such contributions, or perhaps the reason Starbucks didn’t donate to any pro-life organizations is because none of their employees donated to pro-life organizations. As someone with a fair bit of experience soliciting donations for a pro-life charity, I can affirm that it is no easy task! I suggest we give Starbucks the benefit of the doubt, until we put their willingness to donate to a pro-life organization to the test. That test can performed for as little as $20—which is their gift-matching minimum—and I’d be happy to nominate Abort73 as a potential recipient. If Abort73 advocates too specific a position to meet their gift-matching guidelines, surely a pregnancy care center would fit the bill.

So, here is my call to action:

One more thing in closing, if you remain convinced that going to Starbucks demonstrates a lack of pro-life conviction, I have an alternative course of action to consider. Instead of simply switching your business to Dunkin’ Donuts—as I’ve heard suggested—why not give that money instead to an organization that is actively working to protect abortion-vulnerable children? Wouldn’t that be a far more meaningful way to register your opposition to abortion? Perhaps if we invested less in coffee and more in the thousands of marginalized children who die each day from abortion, we wouldn’t have to complain so much about the giving habits of our favorite corporations.

Article Update: On August 21, a donation was made to Abort73 by a Starbucks partner. Within a few hours, the partner was notified that the matching funds request had been approved. Loxafamosity Ministries (Abort73's parent corporation) is now in the Starbucks database of charitable organizations!