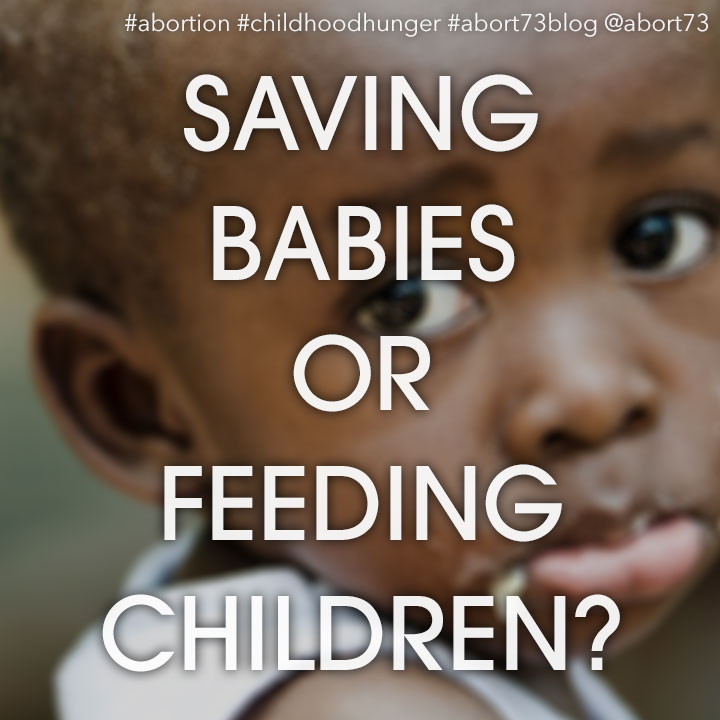 I recently came across a meme in my Facebook feed that depicted a sad, small, dirty child with a plastic spoon in his mouth. The tag read, “Imagine a world where ‘pro-life’ efforts included feeding hungry children.” The implication of course is that those who oppose abortion don’t care about feeding hungry children. This isn’t the first time I’ve encountered such sentiment, and I’m sure it won’t be the last, but it always manages to grieve me afresh—for two reasons. First, I can imagine the sort of smug moral satisfaction it provides to those trying to justify (or ignore) the violence of abortion. Second, it reminds me of our sad propensity to speak right past each other, on this issue and so many others.

A wordier version of the same general opinion came to Abort73 a couple months back, via our online submission form. The author, a 20-something woman from Georgia, writes:

Pro-life conservatives are obsessed with the fetus from conception to nine months. After that, they don’t want to know about you. They don’t want to hear from you. No nothing. No neonatal care, no day care, no head start, no school lunch, no food stamps, no welfare, no nothing. If you’re pre-born, you’re fine; if you’re preschool, you’re [screwed]. Conservatives don’t give a crap about you until you reach “military age.” Then they think you are just fine. Just what they’ve been looking for. Conservatives want live babies so they can raise them to be dead soldiers.

Reading that, the only conclusion I can draw is that this young woman doesn’t actually know any pro-life conservatives. If she did, she would never have come to such a jaded conclusion. Just think about her basic charge for a minute. We could sum it up this way: Pro-lifers don’t care about children. The only reason they oppose abortion is because it limits the number of soldiers they can send off to be killed in war. Even if you support legal abortion, you must see the absurdity of such a claim. In debate circles this is known as an ad hominem—attacking your opponent instead of attacking your opponent’s ideas.

Not surprisingly, the Facebook meme and the diatribe from Georgia are both silent on the ethics of abortion. They don’t bother trying to justify a practice that fatally dismembers the most innocent and helpless members of the human community. Instead, they call into question the character of those who oppose this practice, which is a good way to argue when you're defending something as indefensible as abortion. Of course, it's much easier to malign the integrity of your ideological opponents when you don't really know them, and easier still when you only engage them through the lens of a computer or mobile device.

If you support abortion rights and suspect the worst of those across the ideological divide, here is what I would encourage. Spend some time thinking about motivation. Look for the angle. Ask yourself what causes average, everyday people to oppose abortion so strongly. Do you actually believe it's because we enjoy sticking our noses into other people's business or have an insatiable desire to "control" women?!

Having been vocationally tied to this issue for almost 20 years, I can assure you that raising a fuss over abortion makes for a harder, lonelier, and less prosperous life. On this issue, there is nothing tangible to be gained by opposing the status quo. The same cannot be said for those on the other side. Many of them have amassed a vast personal fortune by peddling abortion; countless others have found a legal loophole that allows for the elimination of an inconvenient child. Both scenarios make it exceedingly difficult for the benefitting party to judge abortion objectively.

Though I'll be the first to admit that public pro-lifers have plenty of flaws, I will say this.  Every pro-lifer I know cares about dying babies and hungry children. The reason is simple. It is only because we care so much about the lives of born children that we feel compelled to protect the lives of unborn children. You might say it this way. Those who oppose abortion care so much about children that they believe children should be protected before and after they're born. If we wanted to, we could compose a host of poignant "Imagine" memes of our own. Here are a few off the top of my head:

Memes, however, have limited cultural value. They tend to energize the base while alienating those they're ostensibly trying to reach. It's hard to reduce a robust condemnation of abortion to a sound bite. We have to go deeper to reach each other. Here's what I mean. Those who oppose abortion cannot grasp how abortion advocates can be so cruel and calloused towards unborn babies. Our equation looks like this:

On the other hand, those who support abortion cannot grasp how abortion opponents can be so cruel and calloused towards desperate women. Their equation looks like this:

For those opposed to abortion, it's ridiculous to argue that hungry children have a more pressing need than dying children. For those who support abortion, it's equally ridiculous to compare human embryos and fetuses to born children. Abortion opponents see no qualitative difference between born children and unborn children. Abortion advocates see a HUGE qualitative difference. One group argues that there aren't enough resources to take care of more children; the other group argues that the children are already here—and must be cared for with kindness and compassion.

In other words, we are at an impasse, UNLESS it can be demonstrated that unborn human beings are just as qualified for legal protection as their older and more developed counterparts. Actually, that's not quite true. I've placed the burden of proof on the wrong side. Unless it can be conclusively demonstrated that unborn human beings are qualitatively different from their older and more developed counterparts, there can be but one conclusion. Abortion is immoral and unjust. So long as any doubt or uncertainty exists regarding the status of human embryos and fetuses, abortion cannot be justified—no matter how many hungry children there are in the world.