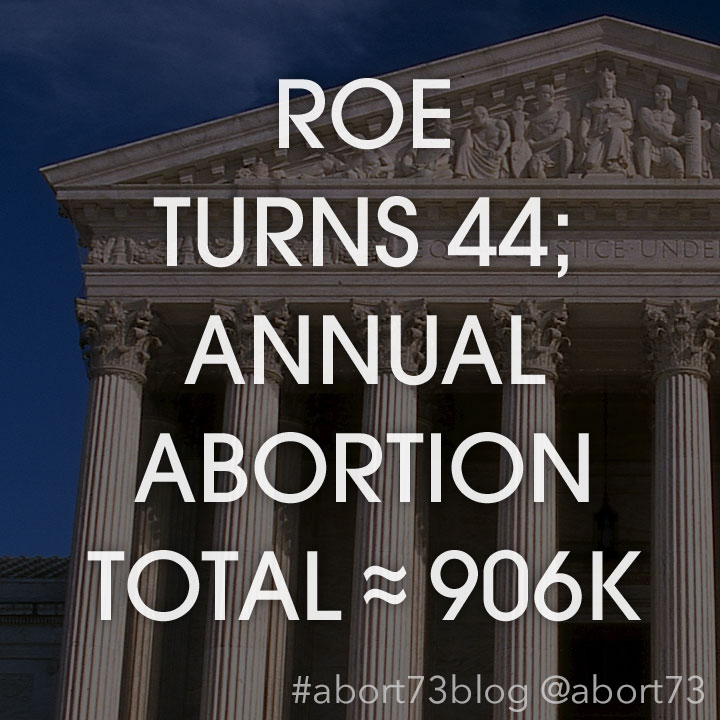 In what has become an annual exercise for me each January, I have been gathering state-by-state abortion numbers so as to project a nationwide total for 2015. I do this for two reasons. First, most states release their abortion data far in advance of the federal government. The Centers for Disease Control (CDC) didn't publish their 2013 abortion numbers until the end of last November. By that time, most states had already posted their abortion totals for 2015. Second, a few states—including California—do not record or report the abortions that occur within their borders. Since approximately 17% of all abortions happen in California, this skews the federal abortion tally considerably.

I was preparing to use those numbers again last week when the Guttmacher Institute released new abortion numbers for 2014. Those numbers have now been used to update our U.S. Abortion Statistics page, as well as all 51 of our state (and district) pages. Their 2014 numbers also served as my reference point for extrapolating an abortion total for 2015.

Without any further ado, my calculations indicate that approximately 906,369 abortions took place in the United States in 2015. That's a one-year decrease of 2.1%. To arrive at that number, I took the 30 states that have already reported for 2015 and tallied their abortion totals for 2014. I then divided that number by the total number of 2014 abortions, as reported by the Guttmacher Institute. Determining that these 30 states account for roughly 42% of all U.S. abortions, I then tallied their 2015 abortions (381,048) and multiplied the total accordingly; 381,048 is 42% of 906,369.

As has been the case for the last decade and more, this is both good news and bad. The good news is that the U.S. abortion total has fallen to almost half of what it was at its peak. Somewhere around 700,000 fewer human beings were killed by abortion in 2015 than in 1990. The bad news is that more than 900,00 innocent and helpless human beings were killed by abortion in 2015—in the United States of America. That easily surpasses the death toll of both heart disease (614,348) and cancer (591,699), which were the two leading causes of death in America (2014). And unlike heart disease and cancer, abortion is entirely preventable. It is not a disease; it is an act of violence against the weakest members of the human community. And instead of targeting its victims at the end of life, it targets them at the very beginning.

Of course, all these numbers tend to be cold and abstract. It’s easy to forget that every abortion involves at least three parties: a mother, a father, and a child. To date, I have posted more than 600 abortion stories to the Abort73 website. Here is an excerpt from one I posted yesterday:

Over a year has passed. During that year I barely thought of my little one. Until recently. I sit here almost every morning, and look at those ultrasound pictures for so long, and cry. I wonder if my baby would have his daddy's striking blue eyes or my wild curly hair. I wish I could kiss those fingers and toes. Or just cradle him in my arms. I will be 18 this year, and this is my biggest regret.  I know it would have been hard, but I believe it would have been worth it. Two girls I know got pregnant the same time I did; their son and daughter are now over a year old. The same age my little one would be. They both tell me they wouldn't give up motherhood for anything. I watch them post pictures with their babies, while I sit here alone and cry. I wish I could have a do over.

Each of us is surrounded by women and men who will face a crisis pregnancy this year. The problem is, they’re almost impossible to identify. So what do we do? Do we give into apathy and despair? Or do we do what we can to influence the way our campus or community thinks about abortion? If you count yourself among the latter, Abort73 T-shirts and promo cards are a great way to introduce those around you to the massive clearinghouse of free information that is Abort73.com. And if you really want to combat abortion in 2017, join us as a monthly donor. We may not be able to reach everyone this year with the truth about abortion, but that’s no reason not to try!