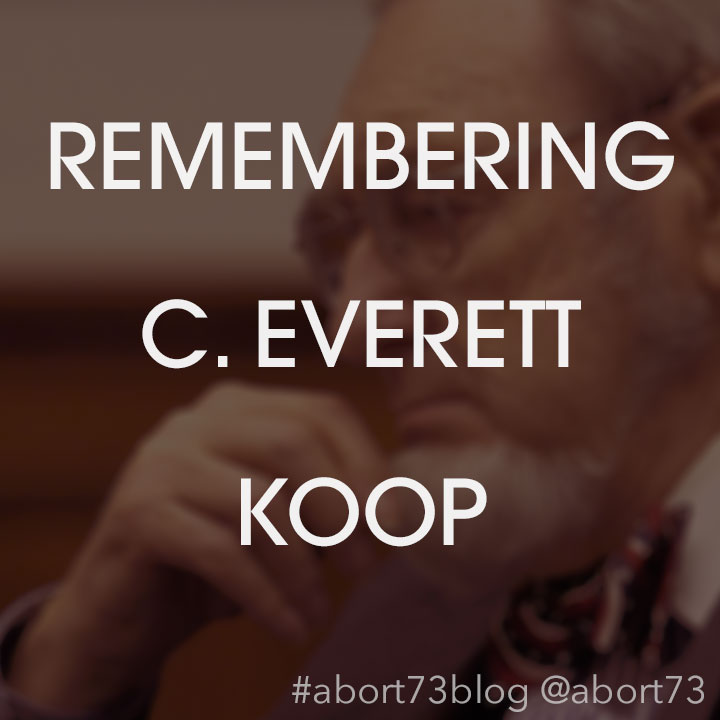 For the last decade, I've had a copy of Whatever Happened to the Human Race? on my "pro-life" bookshelf, but I hadn't actually read it until this past week—prompted by the death of C. Everett Koop, who cowrote the book with Francis Schaeffer. At the time the book was published, Koop was the Surgeon-in-Chief for the Children's Hospital in Philadelphia, where the entire Surgical Center was named in his honor. Shortly thereafter, Koop became the 13th Surgeon General of the United States, where he served from 1982-1989. His outspoken opposition to abortion, expressed mostly through the pages of this book, made his appointment an extremely contentious one. But as it turned out, he hardly touched the abortion issue during the whole of his public tenure.

As a stand-alone work, Whatever Happened to the Human Race? has much to commend it. Taken in its broader context, it is both inspiring and tragic—inspiring for the clear and compassionate ethic it espouses, tragic for what ultimately happened beyond its pages. Though first published in 1979, the worldview analysis feels remarkably contemporary. Were it not for the frequent citations of articles and studies from the 1970's (including reference to a "current science-fiction film," making use of the phrase, "the Force is with you!"), it could easily have been written decades later. In that sense, the book is prophetic, though not entirely prescient. Its most dire predictions, mostly relating to infanticide and euthanasia (but also including abortion-inducing tampons), have yet to materialize in the mainstream. That's not to say their analysis was wrong, but the cultural dominoes have not fallen as quickly as they probably expected.

The book opens with the assertion that "we stand today on the edge of a great abyss." It concludes with the assertion that if the Christian community "does not take a prolonged and vocal stand for the dignity of the individual and each person's right to life… we (will) have failed the greatest moral test to be put before us in this century. And yet almost 35 years later (and 13 years into a new century), we seem to still be standing on the edge of the same abyss. Though the evangelical church in America has not mounted much of a prolonged and vocal stand against abortion, enough has been done to at least hold the line. That in itself is a mercy—particularly when you look at how quickly public perception has shifted in regard to homosexuality. It's remarkable that 40 years after Roe v. Wade, abortion has still not carried the day—despite the steady barrage of media sympathy and the steady abandonment of biblical authority. The abortion divide remains as fixed as ever. Koop and Schaeffer would thank the Christian memory of our post-Christian culture for that. They write:

For a while, Western culture—from sheer inertia—continued to live by the old Christian ethics while increasingly embracing the mechanistic, time-plus-chance view of people… (but) that memory will not last forever without the Judeo-Christian base… how long will it be before infanticide is socially accepted and perhaps legalized?… The next candidates for arbitrary reclassification as nonpersons are the elderly. This will become increasingly so as the proportion of the old and weak in relation to the young and strong becomes abnormally large, due to the growing antifamily sentiment, the abortion rate, and medicine's contribution to the lengthening of the normal life span (USA Today recently reported that the nation's fertility rate has slipped below replacement levels)… One wonders what the chances are for someone who becomes a burden in a society that practices the concept of the survival of the fittest and has begun this practice by starting to eliminate its children… Where the destruction will end depends only on what a small scientific elite and a generally apathetic public will advocate and tolerate… from abortion-on-demand to infanticide and on to euthanasia—the only thing that can stem this tide is the certainty of the absolute uniqueness and value of people. And the only thing which gives us this is the knowledge that people are made in the image of God... if a human being is not made in the image of God, why shouldn't the malformed young and the elderly be put out of the way for the good of society—once society and the courts separate life and personhood? "Right" or "wrong" is then only a matter of what the majority thinks at that given moment, or what the courts judge is for the benefit of society at that moment.

Not surprisingly for anyone who has read Francis Shaeffer, Whatever Happened to the Human Race? relies heavily on presuppositional apologetics. Though Shaeffer's academic work has endured plenty of criticism both inside and outside the church, I generally find his philosophizing to be reasonable and helpful. I also appreciate the central role he played in awakening the evangelical church to the depravity of abortion. By all appearances, it's a position that cost him plenty of friends and support at the end of his life—earning him criticism for becoming "too political." Whether that claim has any merit or not, there is no political component to Whatever Happened to the Human Race?—no call to contact your congressman and no call to get out the vote. Rather, the kind of engagement Koop and Schaeffer call for is to actively condemn abortion, actively care for people, and to actively proclaim salvation through Jesus Christ. They label abortion "an evil as great as any practiced in human history," but they believe society's ills run much deeper and call for a deeper solution:

[T]he Christian consensus gave great freedoms without leading to chaos—because society in general functioned within the values given in the Bible, especially the unique value of human life. Now that humanism has taken over, the former freedoms run riot… If man is not made in the image of God, nothing then stands in the way of inhumanity. There is no good reason why mankind should be perceived as special. Human life is cheapened. We can see this in many of the major issues being debated in our society today: abortion, infanticide, euthanasia, the increase of child abuse and violence of all kinds, pornography, the routine torture of political prisoners in many parts of the world, the crime explosion, and the random violence which surrounds us.

When absolute sexual standards are replaced by relativistic ones, and this is coupled with the generally low view of people that modern humanists have been teaching, society is not left with many barriers against the sexual abuse of children. After you remove the psychological and moral barriers imposed by a high and sacred view of human life, child abuse of all kinds becomes very easy… [H]umanists, far from reexamining the basis of their position now that the situation is souring, stubbornly propose remedial action to the problems that humanist philosophy itself has created… Current sexual mores, sexually permissive life-styles, and the breakdown of the family demand abortion. At the same time the availability of abortion contributes to a change in our sexual mores, our permissive life-styles, and general family breakdown… Those in the church who have not made these questions a burning issue have forgotten the church's centuries-old tradition of social action on behalf of the weak and the unwanted.

We are concerned that there is not more protest, outcry, or activism in regard to these issues of life and death… Surely those who call themselves Christians, having a moral base, should make these things a principal issue and be willing, even at the risk of personal sacrifice, to strive privately and publicly for the dignity and sanctity of the individual… If we sit back and do nothing, our mere passivity and apathy will lead to actively evil results by removing resistance to those who are active and nonapathetic.

It is this last concern which Koop himself seemed to have entirely abandoned during his political career. World magazine published an article in the October 2, 1993 issue titled, "Whatever Happened to C. Everett Koop?" It asks:

When questioned about his perplexing public behavior in regard to abortion, Koop comes off as brusque and arrogant. John P. Elliot suggests that when Francis Shaeffer died in 1984, Dr. Koop's moral compass died with him. Even more heartbreaking, perhaps, is the trajectory taken by the life of Francis Shaeffer's son in the years following Whatever Happened to the Human Race? Franky Shaeffer (now Frank) was his father's right hand man when the book went to press. His imprint is literally all over the book. He is named as the copyright holder, and readers wanting to order the five-episode film series are directed to his California production studio. In the decades that have followed, Frank Shaeffer has completely disavowed his father's life work, writing a series of books disparaging his parents' practices and beliefs. He formally endorsed President Obama in 2008 and editorialized that being "pro-life" is perfectly compatible with legal abortion. Even L'Abri, the community founded by the elder Shaeffers in Switzerland, no longer embraces the teaching of its ideologic father—rejecting most of what Shaeffer stood for in favor of a less dogmatic form of Christianity.

So, as you can see, Whatever Happened to the Human Race? is more than just a book. It's a parable of our times—a reminder that we all have skeletons in the closet. Even the most morally astute have blind spots, which makes me tremble. Where will my son be in 10, 20, or 30 years? Will he come to reject everything I stand for? What does it profit a man to evangelize the whole world, yet lose his son? These are difficult questions. I do not blame Francis for the apostasy of Frank. Whose to say a different approach would have yielded different results? Rather, it's a humbling reminder that for all we do as parents, the ultimate trajectory of our childrens' lives is beyond our control. So wherever my children end up in the course of their lives, I hope they will at least say of me that I loved them well. As Koop and Shaeffer remind us, "there is no use in talking of offsetting the loss of humanness in society if we do not act humanly to all people about us in the contacts of our individual lives… So we who are Christians must, on the one hand, fight with determination and sacrifice for the individual in society, and on the other, provide the loving care of people as individuals."