Punishing Society Where It’s Most Vulnerable 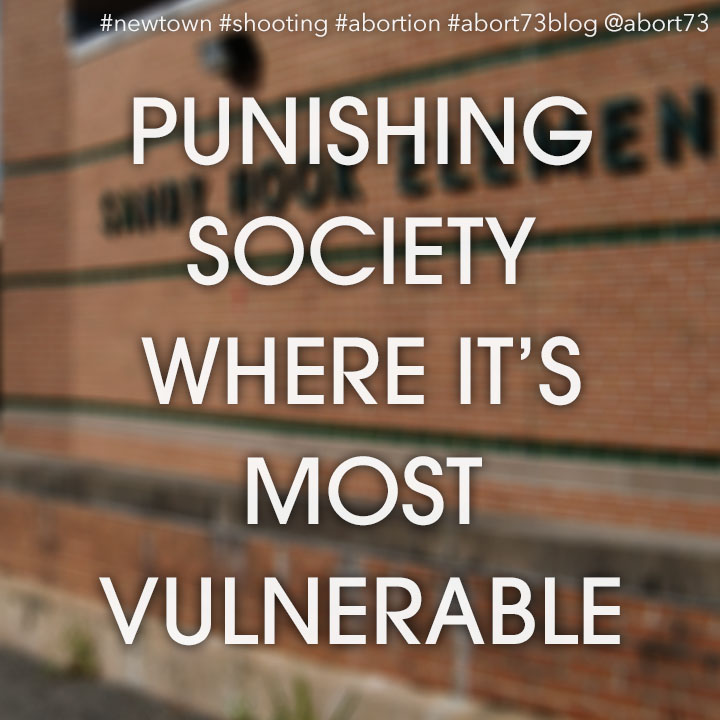 Just a few hours ago, what may be the worst school shooting in American history took place in Newtown, CT. Details are still emerging, but it appears that 20 children were killed at Sandy Hook Elementary, in addition to six adults and the shooter himself. By all accounts, most of the young victims were kindergartners. Responding to the tragedy, Northeastern University's James Alan Fox is quoted by USA Today as saying, "If someone is interested in punishing society where it's most vulnerable, they know that a school is a place where lots of young, innocent children, our most cherished members of society, are congregated and under their gun -- literally." In other words, if an individual wants to inflict cruel and unusual punishment upon a society, the most effective way to do that is to target "young, innocent children." Fox's observation is a profound one, but its application should extend beyond the schoolroom.

Before news of the shooting reached me this morning, I was busy updating and expanding Abort73's state abortion facts pages. To each one, I added the most recent, 2009 abortion statistics, published by the Centers for Disease Control (CDC) last month. Among that list was Connecticut–which has the fourth highest abortion rate in America, according to the CDC. Every day in Connecticut, an average of 37 children are killed by abortion, 13,732 for the year. What is striking about that number is the fact that while the events of today will live on in infamy for the rest of Connecticut history, it is likely that almost twice as many children were killed in Connecticut today by abortion as by guns. Think about that as you process and mourn this morning's loss.

President Obama appropriately responded to the tragedy in tears, lamenting not only the individual lives that were lost, but also the fact that their deaths will affect history into perpetuity. "They had their entire lives ahead of them," the president notes. "Birthdays. Graduations. Weddings. Kids of their own." Fatal violence is always bigger than one life or 20 lives, or 13,732 lives. Each life lost is like a stone dropped into a still pond. The ripples go on and on and on. In one sense, this morning's shooter not only killed 20 children, he killed their children and their children's children, on into eternity. There are no small acts of violence, but tragedies like today's are almost off the chart. It is the age of the victims, the vulnerability of the victims, and the helplessness of the victims that make it such an un fathomable act of evil.

Rep. Jerrold Nadler, a Democrat from New York wonders, "If now is not the time to have a serious discussion about gun control and the epidemic of gun violence plaguing our society, I don't know when is." It's the word "epidemic" that struck me. If the tragic, but isolated murder of 26 people is an epidemic, what is the ongoing, daily slaughter of 3,315 innocent human beings? We can and must devote honest, focused attention to the issue of gun violence, but there won't be any meaningful solutions until we recognize the real problem–and it's not one public policy can fix. It requires a far more fundamental reshaping of our culture. Abortion and gun violence are both alike symptoms of more systematic failures. I was reminded of that today.

So as we work to implement better laws and policies, may we never think that these are the only, or even the most important fixes we can make. And as work to reshape our culture into a more loving and less violent place, may we not lose sight of the fact that it begins with us: sacrificing ourselves for the rights of others–not sacrificing others for the rights of self. Our society has no problem seeing our future in the lives of kindergartners. We need to do a better job seeing our future in the lives of unborn children. They are the most vulnerable among us. And so long as they are belittled and destroyed, our severest social punishment will continue to be leveled from within.