Abort73.com > Abort73 Blog > Ought or Can? Questions of Christian Obligation

Ought or Can? Questions of Christian Obligation 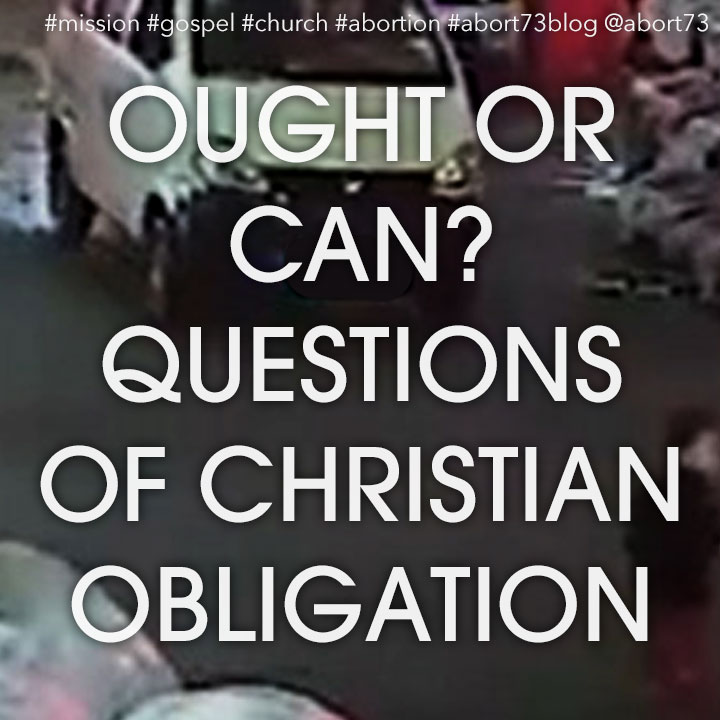 I started reading a new book last week called What is the Mission of the Church? The book is written to address what the authors call "an overexpansive definition that understands mission to be just about every good thing a Christian could do as a partner with God in his mission to redeem the whole world." I'm only three chapters in, and though I've agreed with most of what's been put forth so far, there's an assertion in chapter one that I'm still wrestling through. They write:

I'm inclined to agree with their conclusion as it applies to the examples they've listed, but I'm not convinced that these are the best examples to single out. What if the context is abortion? Or what if the context is the road to Jericho, and there's someone dying in the street? Was the Good Samaritan carrying out the "mission of the church" when he stopped to care for the beaten man on the side of the road? And if he wasn't, does that mean he had the freedom but not the responsibility to intervene? By the same token, was Jesus wrong to assert that the priest and the Levite ought to have stopped to help as the Samaritan did? If not, why can't we say of the priest and Levite that they were simply exercising their freedom in keeping with their gifts and calling?

Just over a week ago, the story of the Good Samaritan played itself out again in Southern China. But this time, the Good Samaritan arrived too late. Yang Yue is the two-year-old girl who wandered into a narrow lane of traffic in the industrial city of Foshan. She was hit by a small van and run-over. The driver stopped briefly, then rolled over her again with the back tires. For the next seven minutes, the little girl lay in a pool of blood as no fewer than 18 people passed her by. Most of them had to literally walk around her to stay their course. A second vehicle ran over her again, not even bothering to go around. By the time Chen Xianmei, a 58-year-old garbage collector, picked up Yang Yue and sought for help, it was too late. She made it to the hospital but never woke up. The reason Yue's death has created such world-wide outrage is because the entire episode was caught on surveillance video (another reminder that graphic images of injustice communicate horrors that word's alone cannot).

Writing for the Guardian, Lijia Zhang asks, "How can I be proud of my China if we are a nation of 1.4 billion cold hearts?" She argues that though China has long embraced a sort of intrinsic, cultural selfishness, the problem has grown far worse in the past decades. The mitigating influence of "a traditional moral and religious system" was destroyed by communism, and the "forced" benevolence of communism has now collapsed as well. "As a result," Zhang says, "there's a spiritual vacuum that cannot be filled by the mere opportunity of money-making." She then endorses what is being described as a "duty of rescue" law, believing this is the only way "to propel action for a people who do not see a moral obligation in rescuing others."

Without question, those who live their lives apart from the fear of the Lord are less likely to rescue a stranger than those who do. If you doubt that, consider China's deplorable record of social indifference as Exhibit A. Returning to the question at hand, would anyone in the church argue that the decision facing the passersby in China was one of "can" and not "ought"? If we had been in their place, would we have said, I have an opportunity to help this child, but I am not obligated to help this child? Certainly not, but what makes this scenario different from those laid out by the authors at the beginning? Why is rescuing a dying child in the street an obligation, while combatting AIDS, sex trafficking or lack of education is an opportunity?

As I see it, the distinctions relate to urgency and opportunity. The story of the Good Samaritan does not teach that everyone ought to spend their days canvassing the streets in search of helpless victims of violence, but it does teach that when we encounter a helpless victim of violence, we ought to do whatever we can to help. It is certainly fair to analyze giftedness and calling when deciding whether or not to become a paramedic, but giftedness and calling must be thrown out the window when faced with the immediate urgent need of a neighbor in crisis. And how do we decide if a need is "urgent?" The imminent threat of death is a good place to start. This is the first reason why I believe it's fair to place our response to a dying child in the "ought" category, while leaving our response to AIDS, sex trafficking and education reform in the "can" category. The second reason is because the dying child in the street presents a tangible opportunity for immediate intervention. With rare exceptions, the more entrenched, global injustices don't. Here again, the model of the Good Samaritan is the eager willingness to be a first responder to any victim of violence we encounter in our path.

I don't want to give the impression that global problems should not be a concern for the local church, but I think it's fair to say that the local church's primary responsibility is to their local neighbors. Moving to China to help care for children being left in the street is something a Christian can do. But caring for a dying child found on your own street is something a Christian must do. In the same way, if you live in a community where girls are being kidnapped into forced prostitution, and you meet one of them fleeing her captors, your involvement is no longer a matter of can; it's a matter of ought.

The reason I'm inclined to place opposition to abortion in the "ought" category rather than the "can" category is because it bears far more parallels to the child dying in the street than it does to those threatened by AIDS, sex trafficking and lack of education. Abortion is an immediate and fatal threat to helpless children. There is no recovery. AIDS and sex trafficking can be fatal, but the immediate threat is much less severe. Secondly, while AIDS epidemics, sex trafficking and the non-existence of public schools are significant global problems, they are not native to most communities in America. Abortion, on the other hand, affects every community in America, whether there is a local abortion clinic or not. How many American children lose their lives to AIDS or sex-trafficking each day? How many American kids die each day for not having a school to go to? Now compare these atrocities to abortion, which kills more than 3,100 American children every single day. Here again, I don't want to imply that American children are more important than other children, but in the spirit of the Good Samaritan, shouldn't the local church have a HUGE concern for the thousands of local children being killed by abortion? Would we commend the church in Nazi Germany for combatting child-labor in America or Malaria in Africa if they weren't doing anything to protect the children being killed in their own back yard?

I don't know whether or not abortion is addressed in the book, What Is the Mission of the Church?, but here is the authors' answer to the question posed by the title: "The mission of the church is to go into the world and make disciples by declaring the gospel of Jesus Christ in the power of the Spirit and gathering these disciples into churches, that they might worship the Lord and obey his commands now and in eternity to the glory of God the Father." By that definition, the Good Samaritan probably wasn't doing the mission of the church when he stopped to care for the beaten man on the side of the road. He wasn't making disciples. He wasn't declaring the gospel (if you understand that to be the verbal proclamation that Jesus died and rose again). And he wasn't gathering disciples for worship. But what about that last clause in the definition? He might not have been making disciples, but he was certainly acting the part of a disciple by obeying the second half of the greatest commandment. And though it's just a story, who's to say the rescued man didn't become a disciple in light of the Samaritan's example? The authors are concerned that using "ought" wrongly implies disobedience when the church doesn't move beyond its explicit, biblical mandate. I would simply contend that if American Christians aren't doing anything about the unborn children being killed right on their own streets, disobedience is precisely the word that comes to mind.