Abort73.com > Abort73 Blog > One Nation Under “Science” with Abortion for All

One Nation Under “Science” with Abortion for All 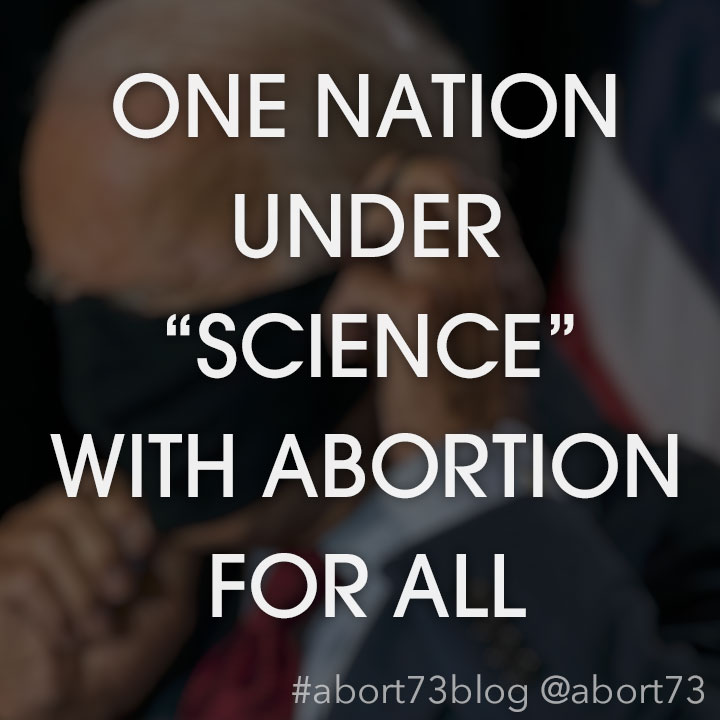 Nacho Libre is one of my favorite comedies—much to the chagrin of my wife and daughter. It’s drivel to them, but I find it rather brilliant. Still, I little imagined that Nacho’s hygiene-challenged sidekick, Esquelito (aka Steven), would come to so perfectly encapsulate America’s sudden and rather ridiculous obsession with science. “I don’t know why you have to be always judging me,” Steven laments, “because I only believe in science.” What makes this complaint so laughable is the fact that Steven’s knowledge of science is virtually nonexistent. He thinks eagle eggs will bestow magical powers, and he believes he and Nacho are sufficiently talented to be pro wrestlers. Spoiler alert: they’re not.

Like so many who feign devotion to science today, Steven was simply looking for a way to justify his personal preferences—which included an aversion to baptism and a self-proclaimed hatred of orphans. To that end, Steven embraced a simple mantra: “I don’t believe in God; I believe in science.” The problem of course is that it’s a false dichotomy—something akin to denying the existence of Shakespeare while espousing the literary criticism of Hamlet. God is to science what the Bard is to the study of his Danish prince. And there’s far more evidence for God’s existence than Shakespeare’s. The world didn’t create itself any more than Hamlet sprung out of thin air. If you go back far enough, atheists and Christians both run up against the same problem. It’s the problem of beginnings. Atheists can’t explain what first set the world in motion, and Christians can’t explain how God came to be. First causes, you see, are matters of faith. Don’t let anyone tell you otherwise.

As it turns out, Esquelito has something of a kindred spirit in President Biden. They both profess tremendous affection for science, but their application is rather narrow and selective. Joe Biden “trust(s) in science” when it suits his political interests, but his devotion wavers when it runs counter to his agenda. He’ll stake everything on mask-wearing and the elimination of fossil fuels—because of science!—but he believes men should be allowed to compete against women on the athletic field and that Americans should fund the global annihilation of abortion-vulnerable children. Neither of Biden’s two big campaign promises—to unify the country and follow the science—survived his first week in office. As the Post’s Marc Thiessen wrote in February, “we’re just a few weeks into Joe Biden’s presidency, and already the broken promises are piling up.” Thiessen explains:

Biden’s second big promise was that he would “listen to scientists and heed their advice — not silence them.” But when his handpicked director of the Centers for Disease Control and Prevention, Rochelle Walensky, said last week that “schools can safely reopen” and “vaccination of teachers is not a prerequisite for the safe reopening of schools,” the Biden White House slapped her down, with press secretary Jen Psaki insisting that Walensky was speaking in her “personal capacity.” No, she wasn’t. Walensky was speaking in her capacity as a government scientist during an official briefing of the White House covid response team. And her comments came just days after a team of CDC scientists published a review in the Journal of the American Medical Association of numerous studies which show “there has been little evidence that schools have contributed meaningfully to increased community transmission.

President Biden’s supporters love to tout his willingness to listen to “the experts” but this too is a misnomer. Scientific study is rarely conclusive, which is why “the experts” so often disagree. If there seems to be consensus, that may only be because the experts who are willing to question progressive groupthink have already been silenced—or cancelled. Joe Biden’s utopian “one nation under science” is a nation where big tech censors dissent and big media provides political cover. The Washington Post recently gave President Biden the abject “Four Pinocchios” for his repeated fabrications about Georgia’s new election law, but most mainstream journalists are content to look the other way—for the greater good.  “It is as though the enquiring aspect of liberalism was at some stage replaced with a liberal dogmatism,” Douglas Murray writes, “a dogmatism that insists questions are settled which are unsettled, that matters are known which are unknown and that we have a very good idea of how to structure a society along inadequately argued lines.”

Dr. Anthony Fauci—Joe Biden’s chief medical advisor—has pontificated that public health officials must not be ideological, but what he means, apparently, is that public health officials must not be ideologically opposed to abortion—as evidenced by his celebration of Biden’s decision to allow American dollars to again fund the dismemberment of foreign unborn children. Dr. Fauci has no qualms with those who ideologically support abortion for the simple fact that he is among their number. His supposed devotion to “pure science” didn’t keep him from becoming a shill for big abortion. Fauci proclaimed to the World Health Organization that globally promoting abortion is necessary for “advanc(ing) gender equality at home and around the world”—though he lacks the moral fortitude to call it by name. There’s speculation that Fauci’s political devotion to “reproductive rights” cost him the NIH drectorship back in 2002, but this administration has shown itself to be just as committed to abortion as Dr. Fauci himself.

President Biden sometimes says that wearing masks will save tens of thousands of lives and sometimes says there’s nothing we can do to slow the spread of COVID. His most consistent messaging has been the assertion that the worst is yet to come. But why does he try so hard to paralyze the nation with fear? Ostensibly, his goal is the preservation of human life, though it’s fairly easy to assign darker motives—especially when you consider his record on abortion. As George Orwell asserts, “no one ever seizes power with the intention of relinquishing it.” Dr. Fauci—who has plenty of his own flip-flops on record—exhibits the same sort of moral schizophrenia. He urged all Americans to skip Thanksgiving, because of the infinitesimally small chance that gathering with family or friends could lead to a COVID death, but he has no qualms celebrating and promoting a procedure that literally tears thousands of innocent human beings to pieces each day.

To add insult to injury, there’s at least anecdotal evidence that the draconian measures implemented by so many states last year to save lives may well have had the opposite effect. Consider this testimony which Abort73 received from a 30-year-old woman in Phoenix, Arizona:

Early in 2020 [my husband and I] started talking about having a second child, and we were working on that, but then this crazy pandemic happened and the economy took a hit and everything started going nuts... April 25th was the day we found out I was pregnant, and May 17th is when we found out that I would lose my job... My husband and I had some really tough conversations about what we were going to do, no yelling or screaming, just some very emotional back and forth... I knew abortion was going to be our best option... This was not an easy decision, and trust me when I say that we both lost five years of our life expectancy simply by talking about this option, but it was the world around us that made the decision for us. Finding an appointment at a clinic within the next two weeks was impossible. The restrictions from this pandemic were probably not helping, but I know it was the thousands of women like me who were being forced to make a difficult decision all at the same time...

This is the dark underbelly of the COVID response. “It was the world around us that made the decision for us.” It was “restrictions from this pandemic” that forced “thousands of women like me” to have an abortion. For all his bumbling absurdities, Esquelito recognized something profound in his cinematic appeal to science. While Jesus cares about orphans—and unborn children, science certainly doesn’t. Science—devoid of submission to God—is cold, cruel, and calculating. It’s a license to live how you want without the burden of ethical responsibility. “We have begun [reordering] our societies not in line with facts we know from science,” Douglas Murray observes, “but based on political falsehoods pushed by activists in the social sciences.” This is what happens when you expect science to do do what it cannot do. You make it a master rather than a servant, which is exactly where President Biden finds himself. Perhaps if he spent more time in “The Palms”—as he calls it—and less time preaching blind-devotion to science, he would come to realize that there is more to life than mere survival and more to science than a partisan agenda.