Abort73.com > Abort73 Blog > No Choice But to March for Abortion

No Choice But to March for Abortion 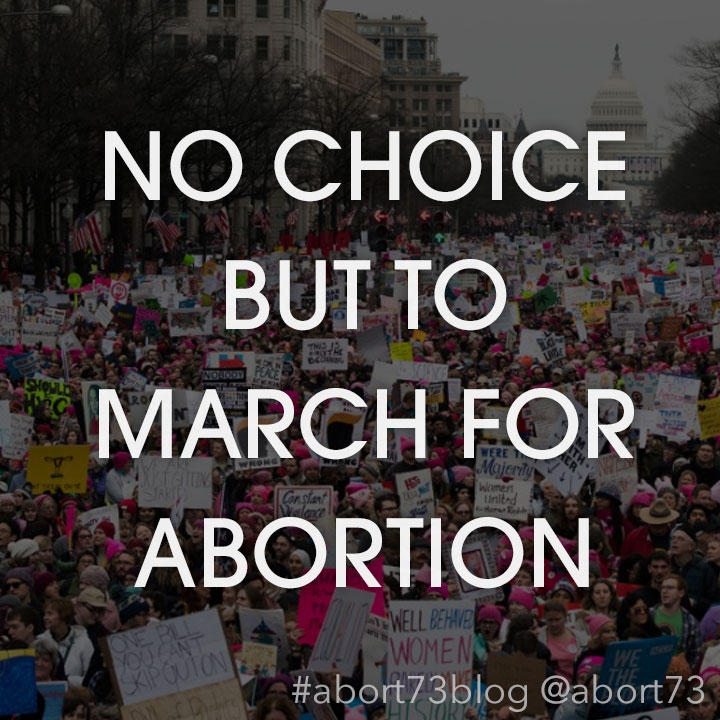 My first exposure to last month's Women's March came via Facebook of course. The Rockford Art Deli, a custom T-shirt shop in the town I formerly called home, had produced a special shirt to commemorate the event. According to the caption, "anyone into supporting women's rights with respect, honesty & positive vibes (is) welcome." I am into supporting women's rights with respect and honesty (and positive vibes), but I am also anti-abortion. That complicates things, since "women's rights" is so often used as a mere euphemism for "abortion rights." Would the Women's March be different? That remained to be seen.

Looking at the event page for the march in Rockford, I found the following statements:

Seeking more clarity, I followed the trail to the national page, which serves as the official voice for all of the regional marches. There I found their eight "unifying" principles, which all marchers are expected to affirm. The second principle, titled "Reproductive Rights," reads:

We believe in Reproductive Freedom. We do not accept any federal, state or local rollbacks, cuts or restrictions on our ability to access quality reproductive healthcare services, birth control, HIV/AIDS care and prevention, or medically accurate sexuality education. This means open access to safe, legal, affordable abortion and birth control for all people, regardless of income, location or education.

In other words, in order to march for women's rights, you also have to be unequivocally committed to abortion. There's simply no room for exercising personal conviction on this issue. In fact, you have to be so committed to abortion that you want the government to subsidize it, in order to make abortion "affordable" for women who could not otherwise afford one. Why would a grassroots movement that is purportedly committed to unity and diversity codify something as divisive as the public funding of abortion? Perhaps it has something to do with who is pulling the strings from behind the curtain. One look at the partnership listing provides immense clarity. There at the top of the page sits the massive logo of their "Premier Partner"—Planned Parenthood, the organization that sells more abortions in America than anyone else.

When January 21 rolled around, Facebook showed me pictures of a handful of friends, family members, and former classmates taking part in various women's marches across the country. Some I knew to be abortion supporters; some I didn't—and still don't. In fact, one comment string centered almost entirely on how central abortion rights were to the Women's March's overall agenda. The woman participating in the march insisted that abortion was a relatively minor component. If only that were the case!

Knowing full well that embracing abortion would destroy any pretense of unity and diversity, the organizers did it anyway. That's how important abortion is to their overall agenda. Said differently, the alienation of approximately half the female population is a price they were willing to pay to make abortion rights part of their official platform. What does that tell us? It tells us that according to the powers that be, women have no choice but to be pro-choice. This bizarre irony is not lost on Mary Eberstadt, who authored the editorial insert that accompanied Time magazine's coverage of the Women's March ("How the abortion debate rocked progressivism"). She writes:

No event in our time has been heralded as more diverse and inclusive of women everywhere—until an antiabortion group called New Wave Feminists took the marchers at their word and tried to join ranks. They got the boot... Support for abortion has become so central and nonnegotiable to today's feminism and progressivism that some women's groups aren't allowed to officially join a women's march that's supposed to be for all women.

"Until just a few years ago," Eberstadt continues, "progressives had a choice between their opinions on abortion and their opinions about everything else. Now they don't." If they want a place at the table at all, they must first check their politically incorrect convictions at the door. Dave Rubin picks up this theme in explaining why he left the left. He writes:

Today's progressivism has become a faux-moral movement hurling charges of racism, bigotry, xenophobia, homophobia, Islamophobia and a slew of other meaningless buzzwords at anyone they disagree with. The battle of ideas has been replaced by a battle of feelings, and outrage has replaced honesty. Diversity reigns supreme, as long as it’s not that pesky diversity of thought. This isn’t the recipe for a free society, it’s a recipe for authoritarianism.

On their homepage, the Women's March on Washington claims devotion to defending "the most marginalized among us." In practice, promoting the violent destruction of the most marginalized among us is one of their central tenets. While claiming to work peacefully to promote "justice and equity for all," the Women's March demands that justice and equity be systematically withheld from those who are threatened by abortion. And while asserting that "women deserve to live full and healthy lives, free of all forms of violence against our bodies," the Women's March is backed by an institution that daily does violence to women's bodies by introducing instruments of death and dismemberment into that sacred, intimate space that is intended for the preservation of life.

For all its fanfare, the Women’s March on Washington wound up representing a relatively narrow and homogenous slice of American feminism—which is what happens when the nation’s largest abortion business commandeers an event. Instead of allowing for a robust diversity of opinion, organizers opted for “abortion-rights absolutism.” It’s the same all-or-nothing approach that is so beloved by big cable companies. You can’t just get the channels you want; you have to pay for everything. In this case, if you want to be a voice against domestic violence or workplace inequality, you have to first throw your support behind abortion. It’s part of the package. So long as you lack the temerity to criticize the surgical or chemical dismemberment of the most innocent and helpless members of the human community, you are welcome at their table. But the moment you question the sanctity of abortion, you are quickly cast into the outer darkness!