My Thoughts on Juno…

My Thoughts on Juno… 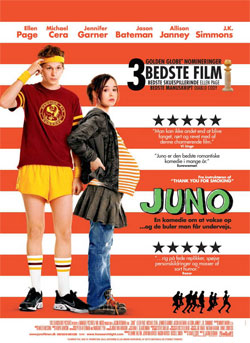 I went to the movie Juno with my wife a few weeks ago, not knowing what to expect. Having seen the trailer, I knew it was about a girl who got pregnant and would give the baby to parents unable to have a child of their own. It looked like it could be a quirky and fun movie (in the Napoleon Dynamite ilk) with a nice positive message. After seeing it though, I have to say that I was quite pleased and really glad I went. It exceeded my expectations. I laughed a lot and was forced to think about important issues. And since the movie has been nominated for Best Picture, I guess I wasn’t the only one who liked it. There has, however, been discussion about what the movie might be saying about abortion, since the main character forgoes having one. So, we thought the film would be worthy of a review on the widely read (cough) Abot73 blog.

To begin, I’m not entirely sure what the writers of the movie were intending to say about the morality of abortion. Juno MacGuff, the female protagonist of the film (played by Ellen Page who incidentally got an academy award nom. for her performance), does consider abortion as an option, but decides against it after running into her Asian classmate outside an abortion clinic. In the funny scene, her pro-life classmate holds a sign and repeatedly chants (with Asian accent), “All babies want to be borned!” or something like that. She informs Juno of some of the developments that the child in her womb has probably undergone, but it is the development of fingernails that gets Juno’s attention. When she enters the clinic, she can’t help but notice everyone’s fingernails (being filed, chewed, or tapping on something) and decides to get out of there.

In the brief abortion clinic scene, it was presented as a cold and callous place. The receptionist, covered with dark eye shadow and piercings, and reeking of a bad attitude, doesn’t look up from her Nintendo DS to greet Juno. The clinic atmosphere was dreary and no one spoke to one another. Juno later tells a friend that the place “smelled like a dentist’s office.” For some, this presentation revealed the writer’s/director’s view of abortion as intensely negative (see this review for instance), but I can’t say for sure. I honestly thought some fun was poked at those on both sides of the abortion debate, just way more at those who defend abortion.

Whatever the actual beliefs held by the writers, abortion is never presented as an unacceptable option, but it is not presented as a good one either. The main aim of the movie, however, is to deal with the heavy issue of teen pregnancy through the experience of Juno MacGuff, and it does so in a witty and entertaining way. The film also deals with issues many teens and adults face: divorce and remarriage, parental abandonment, adoption, teenage sex and romance, etc. In the end, Juno is the heroine of the film and her choices are presented as worthy of emulation. One important way this was brought out was through the contrast between her and the prospective adopting husband (played by Jason Bateman). She is a teen having to make grown-up decisions. He is a grown-up wanting to act like a teenager. Without giving away the details, Juno is vindicated as the more mature one.

As a disclaimer, the film does repeatedly use crude language. You’ll learn plenty of new ways to reference human reproductive anatomy. The film also does little to promote abstinence or condemn pre-marital sex. When learning who the father was (Paulie Bleeker), her dad explains, “I didn’t think he had it in him!” Things like these may offend some. That aside, I heartily recommend Juno as a great film about life and treasuring life. While you may not want to emulate everything Juno says and a lot of what she does, what she does with her child is certainly a great thing.