Abort73.com > Abort73 Blog > More Like a School Than a Soup Kitchen 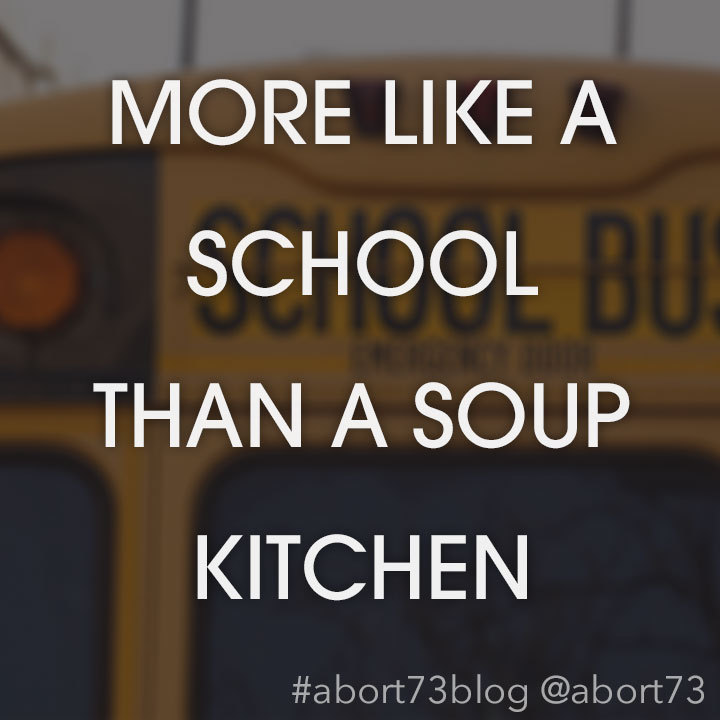 For many years now, donors and charities alike have been conditioned to value (and demand) financial efficiency. And the way we have come to define financial efficiency is by measuring program expenses against administrative expenses. In other words, we compare the percentage spent on administrative costs (like salaries and fundraising) against the percentage spent on actually helping those in need. The lower the first number and the higher the second number, the more efficient a charity is considered to be.

Here's the problem. This metric doesn't work at all for Abort73. In fact, my salary makes up the majority of Abort73's entire budget, which may well trouble some potential donors. Since we're launching our year-end donation drive today, it seems a good time to address this elephant in the room. To do so, I'm going to make three assertions and explain them as best I can.

1. Program expenses and administrative expenses can be indistinguishable

When evaluating the financial efficiency of Abort73, I'd like you to consider two historic institutions: the soup kitchen and the public school. The soup kitchen provides food for those who cannot afford to pay for it, and the public school does the same with regard to education—but that is where the similarities end. Their means for carrying out these objectives are vastly different.

Though it would be perfectly reasonable to evaluate the financial efficiency of a soup kitchen by comparing the amount of money spent on soup versus the amount of money spent on salaries, the same criteria wouldn't work for a school. Why? Because the service being rendered is non-tangible. Does anyone complain that most of a school's budget is eaten up by teacher salaries—or argue that teacher salaries are unnecessary overhead?

As charitable models go, Abort73 bears far more in common with a public school than a soup kitchen. The primary service we provide is a free and comprehensive abortion education, built on the conviction that the more somebody knows about abortion, the less likely they are to have one, recommend one, or support one as a matter of public policy. If I wasn't able to take a salary, I wouldn't be able to market, maintain, and grow the website on a daily basis. In other words, everything Abort73 is and does is made possible because of my salary—though I rarely know from month to month whether we'll even have enough to pay it.

2. The smaller the organization, the more top-heavy the budget

My family has sponsored children through Compassion for more than a decade. Our lifetime contribution is somewhere between $10,000-$15,000. Compassion frequently apprises me that more than 80% of that amount has gone towards the children we sponsor. By their latest count, only 17.6% was devoted to administration and fundraising.

That being said, Compassion spent $76 million on fundraising last year. They paid out $62 million in salaries. They are a HUGE organization that is relatively flush with cash. That makes it easier for them to devote a comparatively larger portion of their $649 million budget to program expenses. By comparison, Abort73's entire budget last year was less than $100,000. If 60% of that didn't go to my salary, there would be no Abort73.

3. Financial efficiency is a two-edged sword

A few years ago I watched an extremely-compelling TED talk titled, "Everything We Know About Charity is Dead Wrong." The basic premise is this: Our obsession with financial efficiency is hamstringing charities in profound ways—limiting their ability to actually remedy the problems they’ve set out to solve. Here are some takeaways:

Why have our breast cancer charities not come close to finding a cure for breast cancer, or our homeless charities not come close to ending homelessness in any major city? Why has poverty remained stuck at 12 percent of the U.S. population for 40 years? [It’s because] these social problems are massive in scale, our organizations are tiny up against them, and we have a belief system that keeps them tiny.

In the for-profit sector, the more value you produce, the more money you can make. But we don't like nonprofits to use money to incentivize people to produce more in social service. We have a visceral reaction to the idea that anyone would make very much money helping other people. Interestingly, we don't have a visceral reaction to the notion that people would make a lot of money not helping other people.

Charitable giving has remained stuck in the U.S., at two percent of GDP, ever since we started measuring it in the 1970s. That's an important fact, because it tells us that in 40 years, the nonprofit sector has not been able to wrestle any market share away from the for-profit sector. And if you think about it, how could one sector possibly take market share away from another sector if it isn't really allowed to market? And if we tell the consumer brands, "You may advertise all the benefits of your product," but we tell charities, "You cannot advertise all the good that you do," where do we think the consumer dollars are going to flow?

Now, this ideology gets policed by this one very dangerous question, which is, "What percentage of my donation goes to the cause versus overhead?" There are a lot of problems with this question. I'm going to just focus on two. First, it makes us think that overhead is a negative, that it is somehow not part of the cause. But it absolutely is, especially if it's being used for growth.

We've all been taught that charities should spend as little as possible on overhead things like fundraising under the theory that, well, the less money you spend on fundraising, the more money there is available for the cause. Well, that's true if it's a depressing world in which this pie cannot be made any bigger. But if it's a logical world in which investment in fundraising actually raises more funds and makes the pie bigger, then we have it precisely backwards.

So the next time you're looking at a charity, don't ask about the rate of their overhead. Ask about the scale of their dreams, their Apple-, Google-, Amazon-scale dreams, how they measure their progress toward those dreams, and what resources they need to make them come true, regardless of what the overhead is. Who cares what the overhead is if these problems are actually getting solved?

When somebody asks me how much of the money Abort73 receives goes to helping women and children, I have no qualms in saying "all of it." There is nothing tangible I can give to abortion-vulnerable children. Their most pressing need—we might even say their only need—is for their mother to choose against abortion. And while it’s true that there are tangible ways to help mothers in crisis pregnancy, her greatest need is for knowledge and insight—which is precisely what Abort73 offers.

As 2016 comes to a close, we are trying to raise an additional $20,000—just to bring us back to the black. If you recognize the value in the educational, cultural-shifting work that Abort73 is doing, would you be willing to make a year-end donation? Would you be willing to give (like you mean it)?!