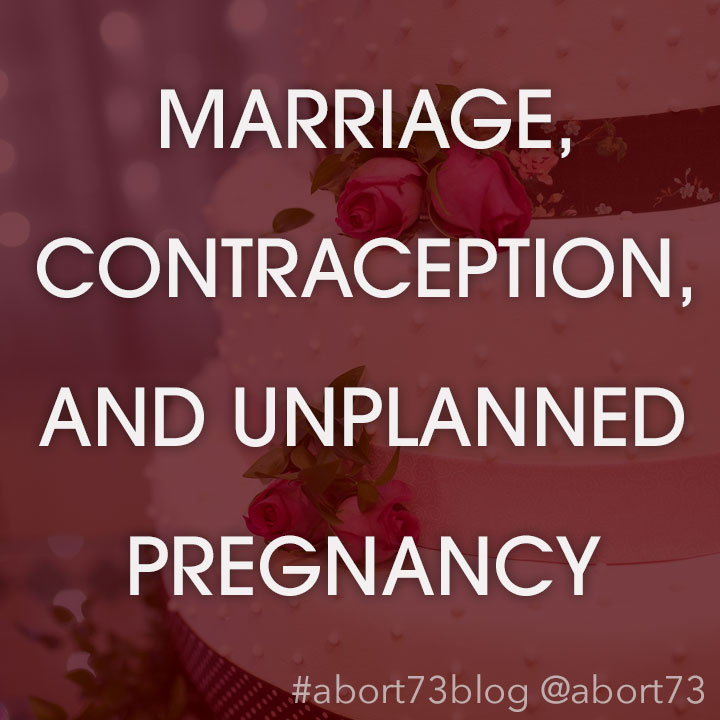 I noticed an article from USA Today recently declaring that the "first ever state-level analysis of unintended pregnancies" indicates that at least 40% of pregnancies in every state are unplanned. In 29 states and the District of Columbia, more than half of all pregnancies are unintended. I don't know how long "unplanned pregnancy" has been an official classification, but it strikes me as a little absurd. How often is the explicit timing of parenthood actually planned? I was an unplanned child. I have two unplanned children. But was I counted among the unplanned births of 1975? I doubt it. Were my children counted among the unplanned pregnancies for 2002 and 2003? Surely not. Why? Because just like me, they were conceived in marriage and born to a married couple.

My children were unplanned in the sense that my wife and I weren't explicitly trying to get pregnant. They were unplanned, but not unwanted. Historically, that has been the norm. To enter into marriage was to declare that you were ready and willing to bear children, whether you were trying for them or not. There is certainly more to being married than the raising of children, but with rare exceptions, there should not be less. I would argue that every married couple must be open to the possibility of having children, even if they're taking efforts to not get pregnant. Why? That question could be answered in any number of ways, but I'll start with the most pragmatic of all.

There is simply no perfect way for healthy, sexually active people to avoid pregnancy. Bearing children is built into the fabric of marriage because bearing children is built into the fabric of having sex. At best, the effort to separate sex and procreation has been only marginally successful. Even if contraception works the vast majority of the time, it only has to fail once. And what will you do then? Thankfully, unplanned pregnancy is only a problem when the pregnant couple has no willingness or no capacity to care for the child they've conceived. In marriage, this is rarely the case. In other words, the real problem isn't unplanned pregnancy. The real problem is the number of unplanned pregnancies occurring outside the context of marriage, which raises an interesting question. When did the term "unplanned pregnancy" replace the term "out-of-wedlock pregnancy"? Practically speaking, aren't they just different labels for the same thing?

If you do a search for "out of wedlock pregnancies," the first story Google returns is a CNN piece titled, "Out-of-wedlock births hit record high." The 2009 report indicates that 40% of the babies born in the United States are delivered to unwed mothers—a percentage that mirrors the number put forth by USA Today in regard to unplanned pregnancy. Though it's reasonable to assume that a small portion of the babies born to unwed mothers were "planned," by and large, "unplanned" and "out-of-wedlock" are overlapping terms. But by replacing a very specific classification ("out-of-wedlock") with a far more ambiguous one ("unplanned"), we have culturally redefined the way we look at pregnancy. The USA Today article concludes with a statement from Claire Brindis, director of the Bixby Center for Global Reproductive Health, lamenting her belief that, "we do a better job of planning to buy tickets to see Lady Gaga than we do about being careful in planning for when we're going to have children, how many children and when in our lives we're going to have them."

Do you see what's happened? The subtle switch from "out-of-wedlock" to "unplanned" has helped change the cultural understanding of pregnancy. And even for married couples, it's introduced the idea that the timing and frequency of pregnancy is something that must be manipulated and controlled. If "out-of-wedlock" pregnancy is the problem, the solution is for people to get married, or to not have sex until they are. But If "unplanned pregnancy" is the problem, the solution is to find ways to have sex without getting pregnant (something which human beings have shown little capacity to do). Brindis, speaking again to USA Today, makes the tired assertion that the "high numbers of unintended pregnancy" owe to the "difficultly in finding family-planning services" and a "lack of access to birth control."

Whether the issue is unplanned pregnancy or abortion, improved access to contraceptives is almost always trotted out as the solution. Last week, a story from TIME magazine was carried by Yahoo! News. The headline reads: "U.S. Abortion Rate Drops, Except Among Poorest Women." The article states that between 2000 and 2008, the overall U.S. abortion rate fell by 8%, while the abortion rate among those below the federal poverty line increased by 18%. Not surprisingly, the study's lead author declares: "That abortion is becoming increasingly concentrated among poor women suggests the need for better contraceptive access and family planning counseling." But is a lack of access to contraception really the problem?

Three days ago, The UK's Daily Mail posted a story with the following headline: "Abortion rates soar by a third among 'Sex and the City generation' of women in their 40s." The article reveals that the last decade has seen a 30% increase in abortions among British women in their 40's. More than a quarter of all pregnancies to women so aged end in abortion. These numbers are similar to what we see in the U.S. As noted in a post last month, the abortion rate in America has been decreasing among every age group except for three: women aged 30-34, 35-39, and women over 40. Why is this happening? The head of Britain's largest abortion provider has a groundbreaking answer: the surge in abortion among relatively wealthy and well-educated older women owes to a lack of… contraception. I would suggest that another factor mentioned in the Daily Mail article plays a much more significant role, namely the "soaring divorce rates" and the "growing numbers of women who have chosen never to marry."

Even if you throw the moral demands of Scripture out the window, there are massive social reasons for limiting sex to the context of marriage. Roughly 84% of America's 1.21 million annual abortions are performed on unmarried women. The Guttmacher Institute tells us that a majority of these women "used a contraceptive method during the month they became pregnant." Had they instead been sexually abstinent until marriage, the violent deaths of more than one million innocent human lives would have been avoided. Make no mistake, contraception is a tragically insufficient solution. This was especially clear to me last week as I read Abby Johnson's new book, Unplanned. Until recently, Abby was the director of a Planned Parenthood abortion clinic in Bryan, TX. She writes this of her 2005 pregnancy: "There's incredible irony in the fact that I had a career in educating women about contraception, and yet for the third time, conceived while using contraceptives." Even more telling is the result of this third pregnancy. At this point, Abby had already had two abortions. She was still firmly "pro-choice," and the timing of her third pregnancy was no more convenient than the first two. Practically speaking, only one thing had changed. This time she was married, and guess what, this time she didn't have an abortion. Contraceptives didn't solve for her the problem of unplanned pregnancy. Marriage did.

Marriage provides a context for people to be sexually active without having to live in fear of "unplanned pregnancy."  It is a formal, binding relationship that has proved remarkably conducive for raising a family. One could even argue that apart from the institute of marriage, there is no family. And I don't say this as one who finds marriage easy or always pleasant. I say this as one who has wrestled for ten years with the difficulties of being married. It is the hardest and oftentimes the most frustrating endeavor I have ever undertaken, but a marriage-less society is a dreadful alternative. For the individual, marriage is a constant, sanctifying assault upon our natural self-absorption. For society, it provides unparalleled stability and protection. With rare exception, a man who cares only for himself is far less benevolent and socially responsible than the man who cares also for a wife and children.

Marriage is a tried-and-true deterrent to unplanned pregnancy. In many ways, it eliminates the category. Contraception is a tried-and-true deterrent to sexual responsibility, marketed on the presupposition that sexual restraint is unhealthy, unnatural, and impossible. Without question, the combination of pre-marital abstinence and post-marital fidelity is not an easy one. But when the stakes are as high as they are, when millions of innocent human lives hang in the balance, should we be looking for something easy or something that works? At the end of the day, the question is a fairly simple one. Would you rather embrace a solution that's extremely difficult and extremely effective, or a solution that's easy and ineffective? To borrow and tweak a quote from G.K. Chesterton: For most people, the biblical teachings on marriage, sex, and family have not been tried and found wanting; they have been found difficult and left untried.