Making the Tragedy of Abortion Personal 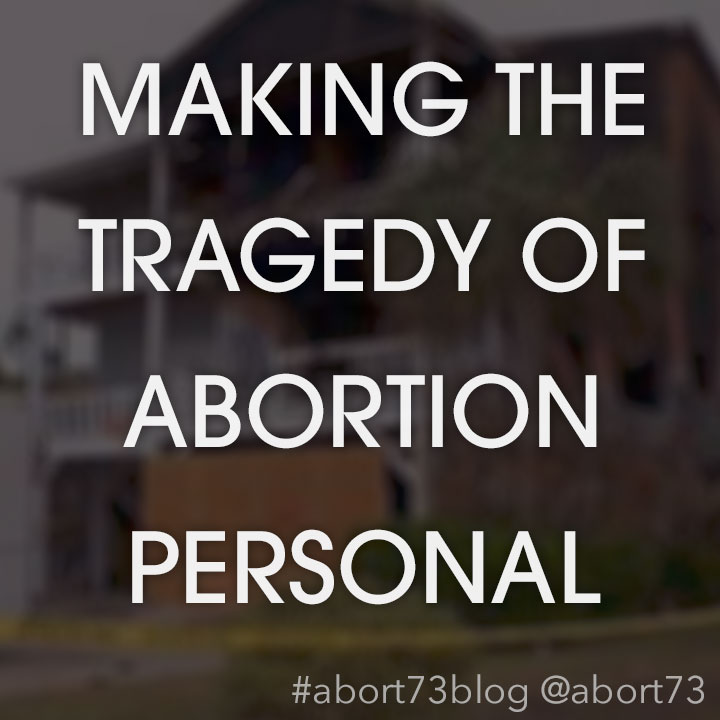 In a world as big as ours, tragedy is always striking somewhere—but we rarely notice. Even in our own communities, most tragedies remain impersonal and abstract—a mere headline or news report that is quickly forgotten. With rare exceptions, it is only when there is a personal connection that we begin to feel the actual weight of devastation.

Such was my family’s experience this past Easter morning when a three-alarm fire tore through a house across the street from us. My wife and I awoke at around 3:45 to yelling and loud pops. It sounded like fireworks, which we hear a lot in our area, but the screaming portended something much worse. When my wife looked out the window, she saw flames underneath the house (which is on stilts), yelled for me to call 911 and ran out the door. With heart racing, I called 911 from our deck. As I spoke with the dispatcher, the flames climbed to the second and third stories. A man jumped or fell from the top balcony while my wife was in the street. Other neighbors carried his limp body out of the driveway, fearful that the car under the house would explode. The few minutes that it took for the fire trucks to arrive seemed like an eternity.

Forty-five minutes later, the fire was contained, but one woman was dead and her husband—the man who jumped from the balcony—would die the next day. The four children in the house all made it out alive, but two of them lost their mom and step-dad; the others lost their aunt and uncle. We did not know the family. The house in question was a vacation rental, and they had only arrived the day before. Nevertheless, our proximity to the tragedy—our first-hand involvement—made the horrors of a house fire real in ways that it never had been before.

It was hard to go to church that morning, particularly for the celebration that surrounds Easter. As shaken as we were, we found ourselves surrounded by people who—by no fault of their own—were oblivious to the devastation we’d experienced. And even our experience of the tragedy was a far cry from that of the family itself—or those who knew and loved them. After church, I spent a fair bit of time coaching our children on what to do if they found themselves trapped in a burning building with only a window for an exit. When we walked past the house later that afternoon, we saw for the first time that the vinyl siding on the neighboring house—some forty feet away—had completely melted. Such was the intensity of the heat emanating from the burning home.

For the last two days, the fire has been a leading, Myrtle Beach news story. Cars frequently slow and stop in front of the burned-out house to gaze at its charred shell. But despite the coverage and despite the curiosity, for most people in the area, the fire was nothing more than a side note to their Easter—a mere headline. For us it was something more. It was personal.

Last week, my family and I sat with friends around a fire pit underneath our house. Gusts of wind blew sparks hither and thither, but I gave nary a thought to a house fire. It took all our ingenuity to keep a single log lit. How could an entire house go up in flames?! Now, it might be some time before I can bring myself to sit around such a fire again. And it’s not because I’d never before heard of a house fire. On an academic level, I knew the danger. I was already “anti-house-fire,” but I had never before felt the weight of devastation.

It was a similar, two-fold journey that first opened my eyes to the devastation of abortion, and that’s what I’d like to close with. It’s easy to be academically “pro-life.” It’s easy to be theoretically opposed to abortion while remaining practically indifferent. That was me—until two things made abortion personal. First, I saw the pictures. Abstract abortion totals were suddenly replaced by images of the violence that abortion visits upon individual human children. Second, I went to an abortion clinic. I saw women walk in pregnant and walk out not pregnant. Standing there on the outside, knowing what is happening on the inside, is a heavy, turbulent experience. But even there, two degrees of separation isolated me from the act itself. I wasn’t in the room to hear the screams and sobs of the mother, and I wasn’t in the womb to see her tiny child torn apart.

If you’re reading this, there’s a good chance that you’re already academically opposed to abortion; my challenge to you is to make it personal. If you’ve never stood outside an abortion clinic while abortions were taking place on the inside, do so. Find one in your area, find out the day(s) they perform abortions and go! There are plenty of practical benefits to maintaining a pro-life presence outside an abortion clinic, but the greatest benefit may be to your own soul. As is true in almost any context, keeping tragedy at arms length may be the easier route, but making it personal is what ultimately bears the most fruit.