Abort73.com > Abort73 Blog > Life is its Own Reward: Lessons from The Blind Side

Life is its Own Reward: Lessons from The Blind Side 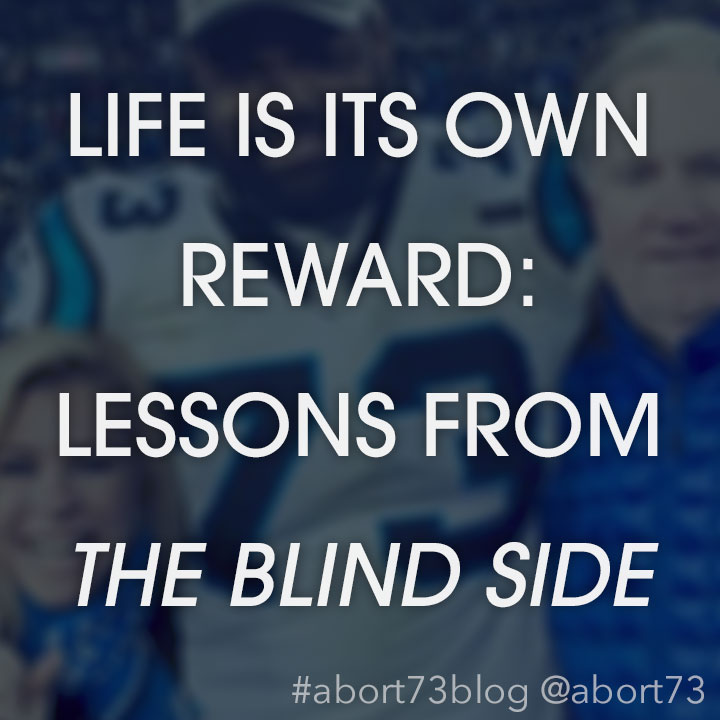 I have never seen The Blind Side. But I recently finished reading the book—and I’m glad I did. Though it’s not a book that gives any ink to the topic of abortion, The Blind Side anchors itself upon one of the most unusual and controversial adoptions in our country’s history. The adoption of Michael Oher was unusual because it took place when he was already in high school. It was controversial because Michael Oher wound up becoming one of the most prized football recruits in the nation, and his extremely-wealthy adoptive parents were prominent Ole Miss boosters. By the time Michael Oher committed to play football for their alma mater, plenty of NCAA eyebrows had been raised.

Author Michael Lewis develops the story with a sort of back-and-forth narrative that covers not only the story arc of Michael Oher’s remarkable life, but also the evolution of pro football and the devolution of West Memphis. It isn’t until the second-to-last chapter, “Freak of Nurture,” that Lewis finally reveals the heretofore unknown backstory of Michael Oher’s childhood. Needless to say, it was not a healthy one. His childhood, in fact, is exactly the kind that abortion advocates point to when defending the necessity of their vile practice. Michael Oher was one of at least ten children, though his biological mother was incapable of caring for even a single one. His father was an ex-con who never took the trouble to meet the son who’d been named after him.

By the time Michael was five years old, and his memory kicked in to record events for posterity, [his mother] was caring for seven boys and three girls, all under the age of fifteen. Only she wasn’t really caring for anyone, as she’d become addicted to crack cocaine... As [she] had no income except for whatever the government sent her on the first of each moth, the children had no money for provisions. They had no food or clothing, except what they could scrounge from churches and the street. Surprisingly often, given the abundance of public housing in Memphis, they had no shelter. When asked what he recalls of his first six years, Michael said, “Going for days having to drink water to get full. Going to other people’s houses and asking for something to eat. Sleeping outside. The mosquitos.”

Despite these horrific living conditions, Lewis notes with amazement that, “by the time Michael turned seven his greatest fear was that some man in a uniform would come and take him away from his mother.” When that scenario became a reality shortly thereafter, Michael and his brothers fled at the first sight of the police car. They watched from an abandoned building nearby as their mother screamed and their three baby sisters were taken away—never to be seen by the boys again. For several weeks following, the remaining family members lived out of an old Monte Carlo. Seven brothers and their mother sleeping on top of each other, as one of them later recalled. Each morning, they would clean themselves up in a gas station bathroom.

When the state finally caught up with them, Michael and his brother Marcus were placed into a miserable foster care home. They endured for two years but ran away when it was announced that they were being shipped across the state. Michael eventually wound up in a state hospital for troubled children. For the first time in his life, he had regular meals and a bed, but his only aim remained the same—to get back to his mother. To that end, he managed to escape from a facility that was on 24-hour lockdown. When Michael eventually found his mother, she was now living in Memphis’ infamous Hurt Village. Lewis describes it this way:

Hurt Village had become an inferno of gangs and drugs and crime. The city had decided to rip it down, but didn’t have the money to do the job. To spare themselves the expense of relocating the residents, the Memphis Public Housing Authority simply stopped maintaining their apartments.

Among the roughly one thousand residents, there was not a single two-parent family. A full 75% suffered from mental illness (including drug addiction), and the median education level for the adult residents was the 4th grade. Once in Hurt Village, Michael rarely went to school and was essentially left to raise himself—this time without the help of older brothers. “His family life was unusually troubled,” Lewis tells us, “even by the standards of Hurt Village.” Summarizing Michael’s condition, Lewis continues:

It’s that last line that caught my attention, along with this one: “It was as if [Michael Oher’s mom] had been put on earth to answer [one] question: how little can a mother care for her children and still retain their affection?” To me, that may be the most amazing thing about Michael’s story. Despite a childhood marked by extreme poverty and neglect, Michael Oher was a generally happy kid. This is how Lewis describes Michael’s life at Hurt Village:

He played games from morning until late at night. Every now and then the older guys started shooting their guns at each other—but that was just pure entertainment. “We’d sit on the hill and watch them shoot it out,” Michael recalled. “It was like being in the Wild West.” He didn’t feel himself unsafe; the older guys with the guns left him and the other little kids alone. He played basketball ten and twelve hours a day, and grew ever more certain that he was destined to be the next Michael Jordan. Hurt Village had long since come to epitomize the despair of inner-city life, but it din’t occur for a minute to Michael to leave. “It was fun,” he said. “Everything was fun. Nobody stopped me from doing anything.”

The closest The Blind Side gets to addressing the topic of abortion is with a passing remark made by Michael’s mother. When asked why she didn’t worry about having to take care of another baby (which may have been a polite way of asking why she didn’t have an abortion), she responds “God put it there, and He ain’t going to put no mouth on this earth he can’t feed.” Depending on your perspective, you might applaud the faith of that remark or write it off as sentimental nonsense. At the very least, it’s a sloppy hermeneutic when used to justify maternal promiscuity and neglect. The material point is that by any objective standard, Michael’s Oher mother was in no position to be having children. Birth control advocates would say she should have been on the pill. Planned Parenthood would say she should have aborted. Evangelicals would say she shouldn’t have been sleeping around and using drugs. But all would say she was an unfit mother.

I emphasize that because in the fight against abortion—and we should be fighting against abortion!—its easy to view every birth as a victory. It’s easy to lose sight of the bigger picture. We should be proclaiming from a thousand rooftops that abortion is not the solution! But we must also be willing to proclaim that not aborting is not the solution either. Choosing to give birth to your child does not make everything better—not by a long shot. The real problems being faced by children and families across our nation and world go way deeper than anything that can be solved between conception and birth. That’s the first take away from all of this. Lets be honest about the horrors of abortion and the ongoing difficulties of raising kids in broken, impoverished families.

The bigger and more encouraging takeaway for me is simpler and more profound. Life is its own reward! That is the lesson I learned from the story of Michael Oher—and it has nothing to do with the fact that he went on to become a celebrated Super-Bowl-winning millionaire. As abortion opponents, we love to highlight people who have beaten the odds—be it poverty, disability or neglect—to become persons of renown. Michael Oher is one of them. Sean Tuohy—the man who adopted him—is also one. Michael Oher reminds us that anyone can become a fabulous success. But what of those who grow up amidst poverty, disability or neglect and don’t beat the odds? Most don’t, after all. Do we just sweep any thought of them under the rug? No. We remember that in a profound sense, life is its own reward. We remember that a life of poverty, disability and neglect is still far better than no life at all—as The Blind Side demonstrates with remarkable clarity. Before Michael Oher was rich and famous, he was a happy-go-lucky kid who had almost nothing—except for a seemingly irrational love for his mother and an intrinsic sense of self worth. By the grace of God, the human spirit is hardwired to be resilient. Poverty, disability and neglect are real and serious issues, but they are not a death sentence!