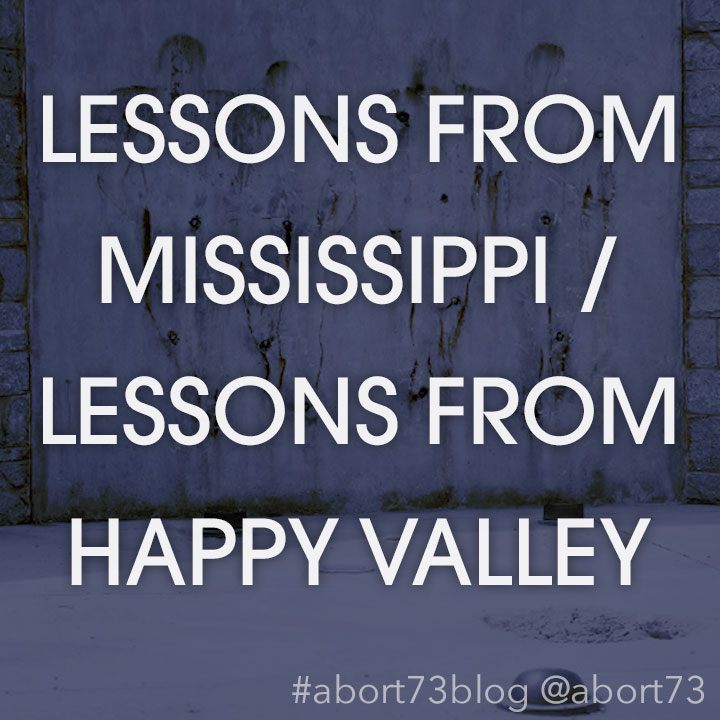 Mississippi is widely regarded as the most "pro-life" state in America, but last Tuesday, a solid majority of voting Mississippians defeated Proposition 26–which would have amended the state constitution to formally declare that "personhood" begins at conception. Though I'm hardly a political junkie, I don't think this was the outcome most pundits expected. On the day before the election, Mississippi Lt. Governor, Phil Bryant, said that if Proposition 26 were to lose, "Satan wins." Bryant is now the Governer-Elect of Mississippi, but the "Yes on 26" campaign he co-chaired did not fare so well.

What does all this mean? That's what I'm still trying to figure out. Proponents of Prop 26 believed its passage would have ended all abortion and cloning in Mississippi—as evidenced by the statements on their Facebook page, but that is almost certainly a too-optimistic assessment. Even if its passage could have forced the Supreme Court to reexamine Roe vs Wade, there is no reason to believe things would shake out any differently this time around—which is why numerous pro-life organizations have been reticent to embrace this strategy. But whether pro-life Mississippians viewed Proposition 26 as tactically judicious or not, that should have had no bearing at the ballot box, which is why the results of this vote are so troubling. Here is the initiative in its entirety:

Should the term 'person' be defined to include every human being from the moment of fertilization, cloning or the equivalent thereof?

Everyone who opposes abortion should be able to answer "Yes" to that question. In fact, everyone who opposed abortion must answer "Yes" to that question. Fertilization is the biological beginning of individual human life. It is the only legitimate line of demarcation. The fact that 58% of the voters in the most anti-abortion state in the country voted against this simple declaration should be a wake-up call to anyone who believes America has a true pro-life majority. I realize that the abortion industry went to great lengths to make Prop 26 about birth control, ectopic pregnancy and in vitro fertilization, but that simply illustrates my point. Until the populace better grasps how barbaric abortion is, even those who call themselves "pro-life" will be easily swayed by the pressure of the abortion lobby. The Washington Post argues that the initiative's failure owes more to the fact that "both the Catholic bishops and the National Right to Life group sat out the [vote]," but this is an overstatement. They may not have used their clout to get Prop 26 on the ballot, but once there, I'm sure neither of these groups endorsed a "No" vote. Pro-life groups may question the wisdom of the personhood push on strategic grounds, but there is no argument on moral grounds. Personhood for the unborn is the end goal, and in an up or down vote, that should be affirmed by everyone who opposes abortion. The fact that it wasn't tells us there's still lots of work to do on the education front. That's the first lesson.

The second lesson is tied to the tragic events at Penn State University, where a longtime, former assistant football coach, Jerry Sandusky, is accused of sexually molesting eight young boys over a 15-year period. Interestingly, most of the attention has not been on the accused pedophile himself, but on the university that failed to act in defense of these helpless children. Way back in 2002, graduate-assistant Mike McQuery reportedly witnessed Sandusky sodomizing a young boy in the Penn State showers, but it was only recently that this disturbing account came to light. McQuery fulfilled his legal duty by reporting the incident to head coach, Joe Paterno, but the Pennsylvania Governor called McQuery a "moral failure" for not doing more.

The Penn State president, athletic director, and football coach have all been fired in the aftermath of this scandal—for their lack of intervention. ESPN's Mark Schlabach said this was "the only decision [the board of trustees] could make," and that "Paterno was fired because he failed miserably while making the biggest decision of his life." Jemele Hill writes: "Penn State's board of trustees ushered Paterno -- and PSU president Graham Spanier -- to a deserved finality with a swift, bold kick." She goes on to say, "For a man of Paterno's stature to turn his back on a child, to allow what appears to be a serial child predator to continue to have access to his program... is totally unforgivable." Rick Relly places plenty of blame on Joe Paterno, but says that "everybody" is at fault for "not taking more steps that might have stopped it." Writing for ESPN's Grantland, Charles P. Pierce went so far as to say:

I do not disagree with these statements, but they follow a line of moral reasoning that is directly contrary to that used by those celebrating the defeat of Prop 26. The basic pro-choice mantra is this: Mind your own business. Don't interfere in other people's lives. Joe Paterno, Graham Spanier, and Tim Curley were all fired for doing precisely this. They minded their own business when they should have called the police. They didn't "force their morality" on a respected, older man who believed it was his choice to sexually abuse young boys. For taking this classic "pro-choice" position, they've been publicly crucified.

These men are not guilty of perpetrating the violence. They are guilty of not doing anything to protect children from the violence perpetrated by another. It is inconsistent to argue that in the case of abortion, we have an obligation to not interfere while in the case of pedophilia, we have an obligation to interfere. This is a moral schizophrenia that is built on the legal schizophrenia created by Roe vs Wade. Society says of abortion: Who are we to judge? What's wrong for you isn't wrong for everyone. We should be free to follow our own conscience. Let God settle accounts. But if you apply any of these arguments to the tragic events in Happy Valley, you quickly see how vacuous they are. If we should protect children from the violence of sexual assault, we should also protect them from the violence of abortion.