Abort73.com > Abort73 Blog > Lessons from Hosea on the Barbarity of Abortion

Lessons from Hosea on the Barbarity of Abortion 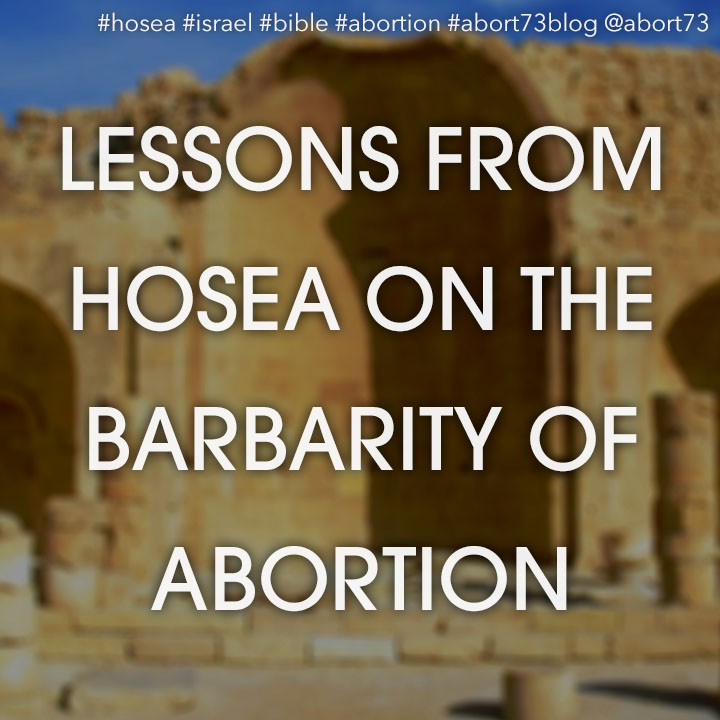 I've been reading through the minor prophets of late and was struck by the numerous abortion-related implications found in the book of Hosea. I'll go through them in order, but before I do, a quick recap: Hosea is the prophet whom God commanded to marry a prostitute, as a visual picture of God's relationship with the nation Israel. The entire chapter is rife with sexual language as it describes Israel's unfaithfulness (whoring after other gods). God's anger is severe, but just as Hosea continues to pursue and redeem his wayward wife, so God does for Israel. With that as a backdrop, here are the verses which struck me as being remarkably applicable to abortion:

1:3 - So he married Gomer daughter of Diblaim, and she conceived and bore him a son.

Strange that I never noticed this before, but why does the Bible so often precede a record of birth with some variant of the term "she conceived"? Why not just say, "he married Gomer and she bore him a son"? Does Hosea imagine his audience to be unfamiliar with the concept of pregnancy? The same progression is used in verses six and eight ("Gomer conceived again and gave birth to a daughter... she conceived and bore a son"). Read through Genesis and you find similar descriptions over and over, starting in Genesis 4:1 ("Now Adam knew Eve his wife, and she conceived and bore Cain"). While these are not explicit scriptural declarations that personhood begins at conception, it is still a significant pairing. There has and continues to be great debate over the question of ensoulment. At what point in human development does the soul enter the body? The Bible doesn't answer that question directly, but isn't it interesting that it makes such frequent use of the term "she conceived"? I'm not saying the authors were necessarily using the word conceive in its technical biological sense, but even if they only meant "she became pregnant," when does a woman become pregnant? She becomes pregnant at conception. By giving pregnancy (and by implication conception) such a prominent place in so many narratives, it is reasonable to infer that those who authored such narratives viewed conception as a decisive moment in a person's individual history.

4:9,10 - And it shall be like people, like priest; I will punish them for their ways and repay them for their deeds. They shall eat, but not be satisfied; they shall play the whore, but not multiply, because they have forsaken the LORD.

God is doling out punishment here and I find it interesting that he says, "they shall eat, but not be satisfied; they shall play the whore, but not multiply." The implication is that satisfaction is the normal reward for eating, and multiplying (children) is the normal reward for intercourse. Apparently, God is punishing his people by withholding satisfaction from their eating and childbearing from their sexual immorality. Today, women and men do by choice the very thing which God brought upon Israel as a curse. Can we not understand what a bizarre, self-inflicted kind of abuse abortion actually is?!

9:11,12 - Ephraim’s glory shall fly away like a bird— no birth, no pregnancy, no conception! Even if they bring up children, I will bereave them till none is left.

While the term conceived shows up with great frequency in scripture, this is the only time we find the word conception. I was again struck by the simple progression. Conception, pregnancy, birth. Notice that Hosea doesn't say, "no conception, no implantation, no heartbeat, no brain wave activity, no viability outside the womb, etc." The only decisive moments are conception and birth. Very few people believe abortion should be legal through all nine months of pregnancy. Most believe that at some point in pregnancy, abortion goes from being acceptable to being immoral. If you press them, though, they have a very hard time articulating at what point that should be. Why do they struggle? Because conception is the only decisive moment in all of pregnancy. Everything else is one long continuum of development. Apparently, Hosea knew that.

9:14 - Give them, O LORD— what will you give? Give them a miscarrying womb and dry breasts.

In Hosea's day, God punished the wickedness of Israel by causing Israelite women to miscarry. Barrenness was an utter reproach and so this was a grave punishment indeed. Today in America, and across the globe, women choose to miscarry their own children. They choose barrenness! Such masochistic behavior would be almost incomprehensible to Hosea's audience, and yet it has become tragically normal for us.

10:13 - You have plowed iniquity; you have reaped injustice; you have eaten the fruit of lies. Because you have trusted in your own way...

Though this section doesn't speak of children or of conception, I was struck by the connection of sowing iniquity and reaping injustice. More than 80% of abortions in this country are performed on single women. And no doubt that some of the abortions performed on married women are performed to conceal the sexual relationship they've had with someone besides their husband. In other words, the vast majority of abortions are the aftermath of sexual sin. Abortion becomes the "solution" to that sin—a solution born on the "fruit of lies." Iniquity was sown and injustice is reaped, because so many men and women insist on trusting that their own way is best.

12:2,3 The LORD has an indictment against Judah and will punish Jacob according to his ways; he will repay him according to his deeds. In the womb he took his brother by the heel, and in his manhood he strove with God.

In this rather unusual account, Hosea speaks of the Lord's displeasure with the nation Israel, and then recounts some acts from the life of Jacob (who was the original "Israel", having fathered the 12 tribes). The two incidents in Jacob's life which Hosea speaks of are when he grabbed his twin brother's heel (while in the womb) and when he wrestled with God (as an adult). Isn't it interesting that in the course of this narrative, we're given two insights into the character of Jacob, and one of those occurrences happened while he was still living in the womb?!

13:16 - Samaria shall bear her guilt, because she has rebelled against her God; they shall fall by the sword; their little ones shall be dashed in pieces, and their pregnant women ripped open.

This is the last verse in the book of Hosea, and its a thoroughly graphic and disturbing one. Judgment upon Samaria will come in the form of an attacking army which will kill children and rip open the wombs of pregnant women. It is hard to imagine a more gruesome scene. And lest we get the idea that God somehow condones this behavior just because he uses it as an act of divine judgment against Samaria, flip over a few pages to the first chapter of Amos and we find this decree:

Amos 1:13 - For three transgressions of the Ammonites, and for four, I will not revoke the punishment, because they have ripped open pregnant women in Gilead...

Those who had their wombs ripped open were being punished, and those who ripped the wombs open will be punished. Leaving for another day the question of how God can use wicked men to accomplish a righteous judgment, here's the question I'd like to raise right now. What is abortion but the ripping open of a pregnant woman? Medical advances mean that unborn children today can be ripped to pieces without actually "ripping open" the pregnant woman, but the end result for the child is the same. If a foreign army were to attack the U.S. on American soil, could there be anything more brutal or offensive than if they turned their weapons on little children and pregnant women? Would anyone in America dare justify such behavior? There is a bizarre, tragic irony in the fact that if foreign invaders were to attack and kill our unborn children, it would immediately be labeled an injustice beyond comprehension, but when we turn medical instruments upon our own unborn children, to accomplish the exact same result, it is called a difficult but noble choice. God help us!