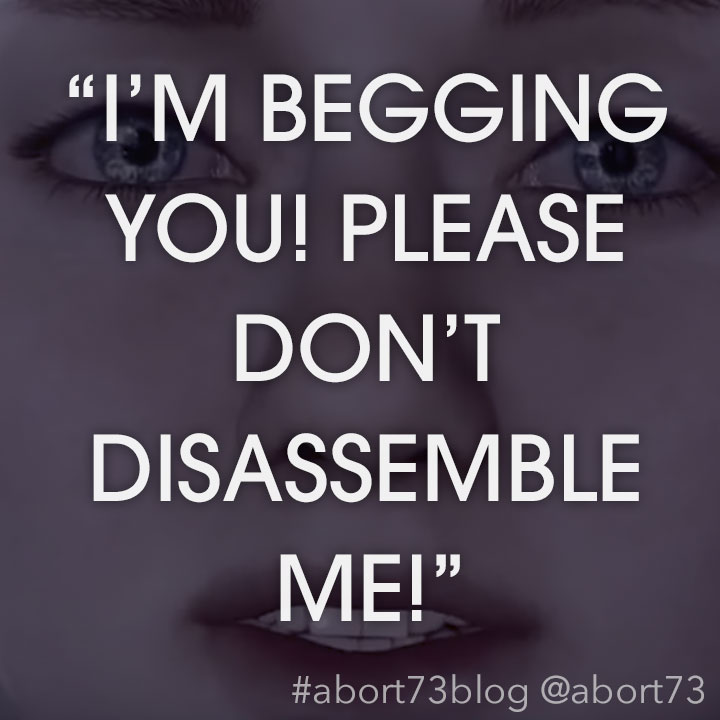 Some weeks ago, Abort73 was sent a link to a 7-minute, YouTube video—one that Sony posted last year to promote its Playstation 3. The accompanying message to Abort73 simply asked, "Wouldn't this be a good anti abortion message?" Our equally simple response: "Yes"—though that assessment is open to debate. Seen differently, this video could just as easily be used to justify abortion. It all depends on how you look at it. As is so often the case, interpretation is paramount!

The video in question, "Kara," has been viewed close to 7 million times on YouTube and depicts the CGI-animated "birth" of the story's heroine. It opens with a close-up of what looks to be a sleeping woman's face, but as the camera pulls back, we realize that this "woman" has no hair and no body. Her head, which is connected to a robotic neck, is in the grip of an automated, mechanical vice that is moving it into assembly position. Kara, you see, is a humanoid computer, being assembled for the first time by a team of animatronic arms. The whole of the story's action takes place on her assembly platform—and the only other character in the narrative never appears on screen. Whether Kara can see him or not, we don't know. But for the viewer, he is a God-like creator whose voice comes to us out of thin air.

Through a series of initiating sequences, Kara is turned on, and we learn from her own mouth what she has been created for: "I can look after your house, do the cooking, (and) mind the kids. I organize your appointments. I speak 300 languages. and I am entirely at your disposal as a sexual partner. No need to feed me or recharge me. I am equipped with a quantic battery that makes me autonomous for 173 years." In other words, Kara has been designed for a life of complete and utter servitude. Some might cynically argue that she has simply been created to be a wife. Whether there's a subtle indictment against marriage here or not, there is something more interesting at play.

The fact that Kara is "born" as a fully-functional, 25-year-old women makes her journey of self-discovery a rather remarkable one. For instance, she understands the first words that are ever spoken to her—a question—and seems surprised that she is able to answer it. Like someone with amnesia, she suddenly finds herself with an entire repertoire of advanced motor skills at her disposal, without any knowledge or memory of how she got them. When she is instructed to move her head and eyes, she does so. When she is instructed to speak in German and sing in Japanese, she does so—and she does it all with a growing sense of wonder.

When her body is completely assembled and she is instructed to take a few steps, she finds she can—and she marvels, raising her arms and circling back in a graceful spin. As the final touches of hair and skin color are added, she modestly covers her nakedness. Was such behavior programmed in? We don't know, but the full scope of her self-awareness will soon reveal itself. After all of Kara's necessary functionality is checked, the voice declares that she is ready for work. This is the conversation that ensues:

"What's going to happen to me now?"

"I'll reinitialize you and send you to a store to be sold."

"Sold? I'm a sort of merchandise. Is that right?"

"Ya, of course, you're merchandise, Baby. I mean, you're a computer with arms and legs, and capable of doing all sorts of things. And you're worth a fortune."

"You thought?! What did you think?"

At this revelation, the voice despairs and immediately begins the disassembly process. In a panic, Kara pleads with him to stop, while futilely trying to push away the arms that are now trying to pull her apart:

"You're disassembling me, but why?!"

"No, I feel perfectly fine! I assure you. Everything is alright. I answered all the tests correctly, didn't I?!"

"Ya, but your behavior is non-standard."

"Sorry, Honey, but defective models have to be eliminated. That's my job. If a client comes back with a complaint, I'm going to have some explaining to do."

"I won't cause any problems, I promise! I'll do everything I'm asked to! I won't say another word! I won't think anymore! I've only just been born, you can't kill me yet! Stop!! Will you please stop?! I'm scared!"

[The disassembly process grinds to a halt. With arms, legs and chest removed, we see the wide-eyed Kara's electronic heart still beating.]

[The reassembly process is initiated and Kara is put back together.]

When Kara is again complete, the voice instructs her to, "Go and join the others." She smiles gratefully, walks off the platform and steps onto a conveyor belt of identical bodies. "Stay in line, OK," the voice tells her, "I don't want any trouble." She thanks him and is transported off the assembly line. "My God!" the voice declares to himself as the screen fades to black. Certainly, it is a thought-provoking little piece, and you can read any number of sentiments into that final statement. Returning to the context I began with, two of Kara's pleas help connect this drama to the issue of abortion. One is noted in the title. The other comes when Kara argues that it's unreasonable to disassemble her immediately after she was born, i.e. put together. Because Kara has cognitive abilities far beyond normal newborns, she can communicate her abhorrence at being dismembered in ways that human embryos, fetuses and infants cannot. If unborn babies could communicate as Kara can, we theorize, they would react in exactly the same way. And there's at least some video evidence to give credence to this wild speculation—namely Bernard Nathanson's Silent Scream, which depicts the apparent attempt of an 11-week fetus to avoid the instruments that are trying to dismember her—much as Kara did with the instruments trying to dismember her.

Where it gets tricky, of course, is in this whole area of cognizance. Those committed to abortion rights would likely argue that instead of supporting the "pro-life" position, this video actually supports the "pro-choice" position. How? By demonstrating that the essence of personhood isn't humanity, it's cognizance. I reject this thesis, but you see how it could be made. The reason we emotionally sympathize with Kara is because she is self-aware. It's not because she's human. She isn't, after all, human. Doesn't that indicate, then, that the essence of our humanity lies in our ability to reason and relate, not in our biology? Yes and no, but here's why such arguments have no bearing on the abortion issue.

The ability to reason and relate is part of what it is to be human. These capacities, in fact, are uniquely human. And while works of fiction have long explored the hypothetical implications of artificial intelligence, the line between human and machine has yet to be approached. Biological human beings have the intrinsic ability to reason and relate. The degree of these abilities differs from one person to the next, but we all have them—even when they're largely prohibited by age or disability. Left to themselves, human embryos and fetuses will grow to have all the cognitive abilities demonstrated by Kara. It is the capacity for these abilities that makes them human—not the complete and perfect manifestation of them. Who among us is fully developed in our ability to think and communicate?! Isn't our whole life an endless process of continued development?

To me, the real force of Kara's pro-life message lies in something more subtle—and it doesn't depend on a hypothetical, sci-fi context. It's rooted in real, observable human behavior—behavior that is manifested in Kara's fight for "life." The reason it seems so normal for a self-aware, "I thought I was alive" computer to fight for its life is precisely because this is normal human behavior. The vast majority of human beings fight to stay alive. Now look again at the life Kara is fighting for. It is essentially a life of slavery—one that is two human lifetimes long, without the daily respite of food or sleep. All she has to look forward to is 173 years of cooking, cleaning, and being used as a sex object. With such a life in front of her, wouldn't it make more sense for her to happily embrace her disassembly? No. If she is to be believably human, she must fight for her life—even if its full of trial and hardship. That is the human way.

Abortion advocates love to talk about what a mercy it is to spare children from lives of hardship. Never mind the fact that they have no idea what kind of lives these children will actually have, and observe this simple fact of human nature. We fight to stay alive, because even a hard life is better than the alternative! In light of this remarkable reality, what right do we have to decide for someone else that they should be disassembled?! Will we say with Planned Parenthood that "defective models [must] be eliminated," or will we take a lesson from Kara and realize that every life is worth fighting for? Every life deserves a chance!