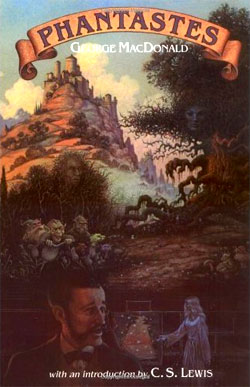 After a recent reorganization of our bookshelf, I was confronted with the numerous books I own but have yet to read. Setting about to remedy that, I selected two biographies on CS Lewis. I began with the much-lengthier, Jack, by George Sayer, and finished with Through the Shadowlands, by Brian Sibley. Along the way, I made a list of the books and authors that had most influenced Lewis over the course of his life. All that to say, even though I tackled these biographies in an effort to shorten my reading list, that list ended up expanding by quite a lot.

And that is what led me to Phantastes, by George MacDonald–a truly fantastic work–fantastic in the original sense of the word: imaginative, odd and remarkable (and because I read the free, ibooks version, it didn't add to my shelf space or deplete from my wallet). Phantastes' influence on Narnia is quite unmistakeable and it's chock full of profound truths. But the reason I mention this book in the context of Abort73 is because of the way MacDonald describes the bearing of fairy children. He writes:

Now the children, there, are not born as the children are born in worlds nearer to the sun. For they arrive no one knows how. A maiden, walking alone, hears a cry: for even there a cry is the first utterance; and searching about, she findeth, under an overhanging rock, or within a clump of bushes, or, it may be, betwixt gray stones on the side of a hill, or in any other sheltered and unexpected spot, a little child.

He then tells the reader that the season and location where a particular fairy child is found indicates what the child's future temperate will be–in some cases warm and sunny, in others cold and stormy. As such, fairy maidens have a natural propensity to seek out children when the days are pleasant and hope not to find them when circumstances are less ideal. But notice what MacDonald says of those fairy mothers who happen upon babies at inopportune seasons. Notice the words he uses to describe their discovery:

Therefore, at certain seasons, and in certain states of the weather, according, in part, to their own fancy, the young women go out to look for children. They generally avoid seeking them, though they cannot help sometimes finding them, in places and with circumstances uncongenial to their peculiar likings. But no sooner is a child found, than its claim for protection and nurture obliterates all feeling of choice in the matter.

This book was published in 1857. That's more than 100 years prior to the legalization of abortion in the U.S. or the UK. It's unlikely George MacDonald had abortion in mind when he penned this passage, but doesn't it strike you as remarkably applicable? Isn't it true that a child's claim for protection obliterates any preference for the circumstances to have been different? And how appropriate that MacDonald expresses that morally insignificant preference with the word "choice." When a child is discovered, no matter how problematic the discovery, "choice" ceases to exist. It is obliterated under a much higher and much nobler obligation. This may have been written in the context of fairies, but it is no less true for humans.