Abort73.com > Abort73 Blog > Even the Word “Abortion” Gives Me Away

Even the Word “Abortion” Gives Me Away 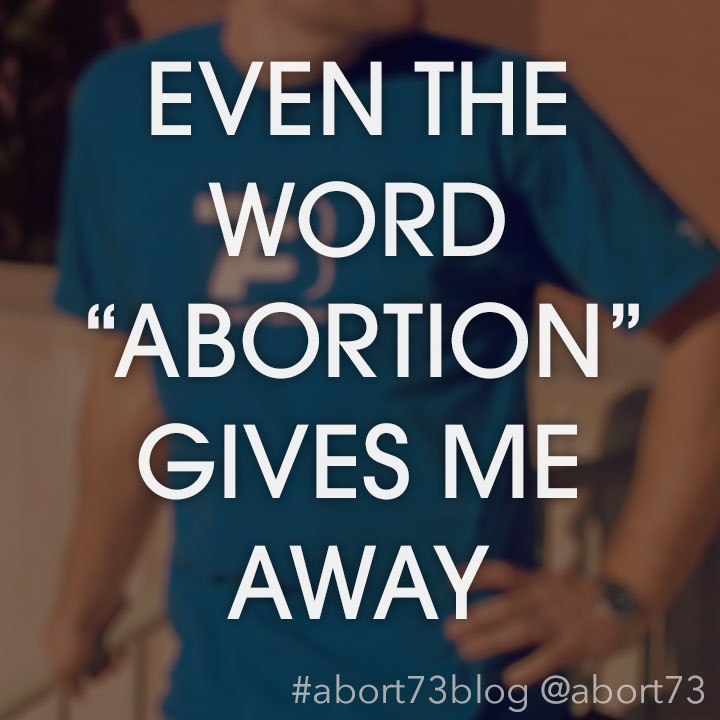 For the most part, I wear an Abort73 T-shirt or sweatshirt every time I leave the house. While I certainly don't cross paths with as many people as the average high school student does, I still get questioned about my apparel. What is Abort73.com? I've answered that query in any number of ways over the last year, but lately I've settled on this: Abort73 is a website that helps give teenagers a better understanding of abortion. I like this response because, while it's truthful, it doesn't give a whole lot away. I want people to be curious (what does it teach about abortion?) so they'll visit the site themselves. Incidentally, I try to always have some Abort73 pens in my pocket to hand out, so I can put something in their hands to help them remember Abort73.com (I like pens better than business cards because they don't crumple in my pocket and I figure the average person is more likely to keep a pen than a business card).

The strange thing about my attempts to offer people a neutral response is that virtually every adult who hears it immediately infers that Abort73 is a "pro-life" website. A few days ago, while in the post-office, one of the clerks asked me about Abort73. When he heard my response he told me how important it was for students to learn more about abortion and how sad it is that abortion is so prevalent. For all he knew, Abort73 could be telling students that abortion is safe and liberating, but he immediately assumed that was not the case. A half-hour later, a woman at another locale asked me the same question, but her reaction was very different. In fact, she responded with complete silence (a silence that communicated disdain and disgust). Just like the postal employee, she didn't know what Abort73 taught about abortion, but she seemed quite displeased just the same (I'm almost certain she was an abortion supporter).

So, how is it that so many people can come to the right conclusion about the ideology of Abort73 without knowing anything of what it actually says about abortion? The answer is simple. To the average adult mind, the very fact that I use the word "abortion" gives me away. People know (consciously or subconsciously) that abortion advocates don't use the word abortion unless they absolutely have to. If Abort73 was promoting abortion, my response would have been something like, Abort73 is a website that teaches teenagers more about reproductive health and freedom. This is the generic and veiled language of the abortion-rights movement. These are the pre-conceptions we're fighting against, the reason that our shirts, themselves, are so ambiguous.

Thankfully, the average teenager responds very differently to the word abortion than the average adult. They are much less conditioned in the established "language" of this debate and are thereby more objective and interested in actually learning more about abortion.

While it still amazes me that people who support abortion always seem to cringe at any attempt to actually teach people more about it, there remain plenty of uninformed and undecided young people who are very reachable. Ultimately, abortion advocates are so antagonistic towards any and all honest education efforts because they know that the more someone knows about how abortion impacts unborn children and how it impacts pregnant women, the less likely that person will be to have an abortion. I don't think anyone, on either side of the debate, can really argue that point. Accurate information is the number one threat to abortion, and accurately educating young people about abortion is the number one threat to its continued legality. This is why Abort73 exists.

If you want to join in on this education process, start wearing an Abort73 shirt today (and remember to throw a few pens in your pocket). And if you come up with a better response to the question, "What is Abort73.com?" please let me know!