Elimination vs Accommodation: Lessons on Population and Disability 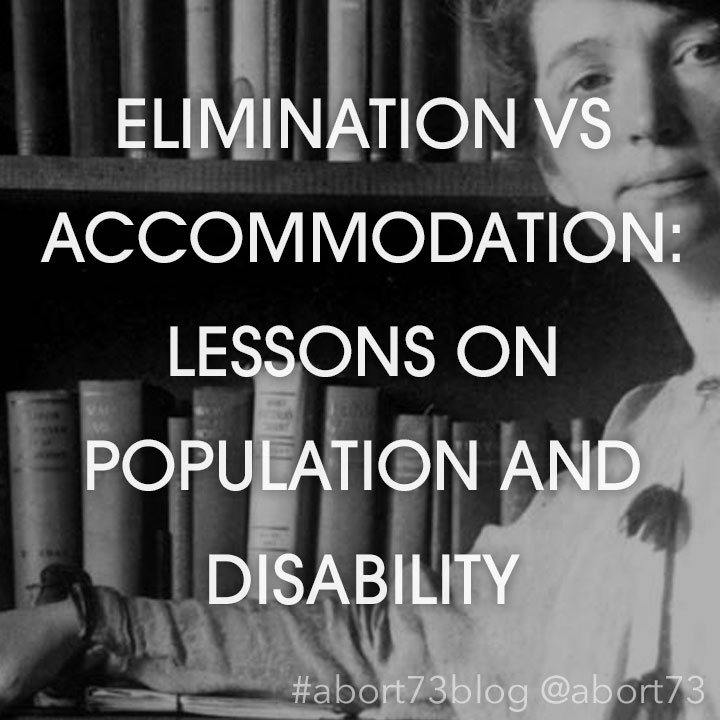 For the last three weeks, I’ve commented on the manifold implications of Margaret Sanger’s grand apologetic for birth control, The Pivot of Civilization—which was first published in 1922. Sanger wrote at the time that “the most urgent problem to-day is how to limit and discourage the over-fertility of the mentally and physically defective.” She theorized that “drastic and Spartan methods may be forced upon American society if it continues complacently to encourage the chance and chaotic breeding that has resulted from our stupid, cruel sentimentalism.” Sanger’s relentless devotion to eliminating the unfit (for the good of the world, of course!) led to her establishment of the American Birth Control League—now known as Planned Parenthood.

Interestingly, at the same time that I was reading and reflecting upon the unmasked bigotry of the late Margaret Sanger—bigotry towards anyone of genetically inferior stock—I encountered a recent TIME article and TED talk that helped expose Sanger’s rhetoric for the rubbish it is. The international cover story for the December 2 issue of TIME magazine is titled: “Why China Needs More Children.”  The November TED Talk features San Francisco architect, Chris Downey, and is titled, “Design with the Blind in Mind.”

Beginning with the first—nowhere has Margaret Sanger’s vision for birth control been more thoroughly realized than it has in China, and the TIME piece makes it clear what an unmitigated disaster their one-child policy has been. Though Sanger promised a Utopia of sorts for any society enlightened enough to throw off religious sentimentality in favor of smaller, more affluent families, the results in China have been devastating. The ultimate impact could be truly catastrophic. “After decades of the one-child policy,” Hannah Beech writes, “Beijing wants its people to have more kids. It may be too late for that.” Consider these further excerpts from the article:

The worlds’ most populous nation, 1.35 billion strong, will soon have too few people—or, rather, too few of the right kind of people. That’s because more than three decades of government-mandated family planning, often called the one-child policy, have succeeded beyond the architects’ grandest dreams.

“The people who made the policy (says Mu Guangzong, a population expert at Peking University) never imagined all the problems we’re facing right now. Their knowledge of demography was shallow. Now society has to pay heavily for their ignorance.”

Through illegal yet common ultrasounds and sex-selective abortions—plus the occasional case of female infanticide and abandonment—parents have skewed the gender ratio so heavily that in some rural areas, 135 boys are born for every 100 girls.

Since the policy was instituted, there have been at least 335 million government approved abortions.

There are [currently] some 25 million extra males, a result of tradition-bound parents ensuring that their offspring quota is filled by a son.

By 2020, 30 million men of marriageable age may be unable to find a spouse.

By embracing the very principles so vehemently espoused by Margaret Sanger, China finds itself perched on the brink of full-blown catastrophe. And before you argue that China’s policies are more draconian than anything Sanger suggested, consider that she endorsed forced sterilization, believed that the imbecilic heads of large families could not be reasoned with, and longed for the clinical diagnosis of mental ineptitude to be more liberally applied. China’s efforts to increase wealth by decreasing population is very much in line with Sanger’s vision, and though the one-child policy was initially credited for China’s financial boon, those gains are now disintegrating. Many believe that even if the one-child policy is dropped, it won’t do much good. The Chinese people have already re-orchestrated their lives around small families. There is simply no putting the genie back in the bottle. Will forced procreation one day be employed to offset the generational impact of forced sterilization and abortion?!

The TED Talk I mentioned speaks to another flawed strain of Margaret Sanger’s worldview—namely her belief that pandering to the mentally or physically disabled was a grievous injustice—one that would eventually be the death knell of any healthy society. Chris Downey, the San Francisco architect who conducted the TED Talk, makes precisely the opposite argument. He maintains that in every aspect of social planning, making accommodations for the disabled actually makes things better for everyone—both on the practical and the spiritual level. On what does he base this opinion? On the fact that he has lived and worked in San Francisco, both as a sighted man and a blind man—and done so in remarkably quick succession. After rapidly and unexpectedly losing his vision in 2008, Downey explains what blindness has taught him about himself and the strangers around him.

“Whenever I’m feeling down,” he says, “I go for a walk in downtown Oakland, and I feel better (just) like that”—because of all the comments of blessing and affirmation he receives. Everywhere he goes, people are watching out for him and trying to assist. Their advice is not always helpful, but in the grand scheme of things, he still believes it all to be good. Disability, he tells the audience, connects him to people in ways he’d never experienced before—cutting across “ethnic, social, racial, and economic lines.” He calls the union one of “shared humanity” and “togetherness.” On a practical level, he makes this observation:

Downey concludes by suggesting that there are only two kinds of people in the world: those with disabilities and those who haven’t quite found theirs yet. He believes this designation is not only more beautiful and inclusive than “abled” vs “disabled,” but is also more honest and respectful of the fragility of life. Margaret Sanger, of course, had no category for such thinking. She believed the mentally and physically “disabled” to be an undue drain on the rest of society and did everything in her power to propagate their elimination. As you consider the fate of China and the suggestions of Chris Downey, which approach do you find to be the most beautiful and inclusive?