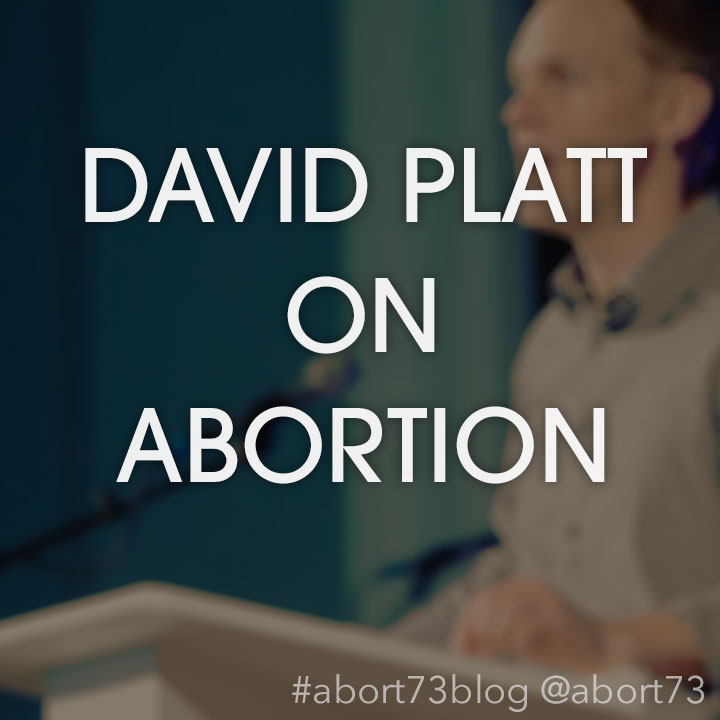 I heard David Platt speak for the first time last year, at the Adopting for Life conference. His message was the highlight of the event for me and I read his book Radical shortly thereafter. It was easily the most personally-significant, Christian Living book I'd read since Desiring God, and that had been 12 years prior. Since then, I've added David to my sermon podcast rotation and have come to greatly appreciate his ministry at Brook Hills—not only his teaching but also the numerous Christ-centered mercy ministries he's helped implement both in the city of Birmingham and around the globe.

Earlier this month, David preached on abortion—I believe for the first time. The topic snuck up on him in a way, when he landed on Psalm 78:5-6. It reads, "He established a testimony in Jacob and appointed a law in Israel, which he commanded our fathers to teach to their children, that the next generation might know them, the children yet unborn…"

Preparing for a series on the importance of faithfully imparting the gospel to the coming generations, he immediately asked himself, "how will we pass the gospel onto the next generation, if we eliminate the children yet unborn?" That question became the basis for his July 3 message, "The Child Yet Unborn." It's worth a listen (or two). These are some of his statements that I couldn't help but write down:

[Abortion is] the most morally outrageous, sinfully-vicious practice that we participate in in the name of freedom.

I want you to hate abortion after tonight, because God hates abortion, and I want to show you why that is.

I'm not saying [abortion] is the only battle raging in our culture… but this is a battle raging in our culture that is affecting, literally, millions upon millions upon millions of people. And if I, or if you, sit idly by while millions of children, individual people in the image of God, all around us, are dismembered and destroyed, and we do nothing, we are directly avoiding God's command to speak and to work on behalf of the weak and the oppressed and the innocent among us, and that is sin.

God is the judge of sin, including Christians who have done nothing about abortion, i.e. me. This is where I have been the most convicted as I have approached this issue because I am the chief of sinners on this one. I point the finger here at myself, for I have been shamefully passive when it comes to this issue in the church. And I have been brought to repentance this week.

David's reference to abortion as a raging battle came on the heels of his reading the following quote from Martin Luther:

If I profess with the loudest voice and clearest exposition every portion of the truth of God except precisely that little point which the world and the devil are at the moment attacking, I am not confessing Christ, however boldly I may be professing Christ. Where the battle rages, there the loyalty of the soldier is proved, and to be steady on all the battlefield besides, is mere flight and disgrace if he flinches at that point.

Interestingly, this is a quote I was first introduced to through Francis Shaeffer's, The God who is There, at the very outset of my pro-life involvement in 1999. I was a recent college grad, spending lots of time on university campuses with the Genocide Awareness Project—a traveling photo-mural exhibit that compares abortion to historic and contemporary crimes against humanity. As a student, I did a fair bit of public evangelism with Campus Crusade. As a graduate, I now found myself telling almost the exact same students that abortion is a historic injustice. Guess which proclamation earned me more hatred and contempt? Without question, it was the latter—which is why a majority of the campus ministries we contacted blankly refused to join us in publicly exposing abortion. They didn't want students to have a bad impression of them. With that experience as a backdrop, perhaps it's no wonder that my mind ran to abortion when I heard this quote from Martin Luther. But until now, I don't think I've heard anyone else apply it to abortion, nor have I been willing to publicly do so myself. Why? Because abortion is my issue, so to speak, and pride is an ugly thing, whether you're talking about yourself or your calling.

To apply Luther's quote to the context of abortion is to essentially infer: It doesn't matter what you say or do about anything else. If you are not being a witness against abortion, all your other labors are worthless. Your faithfulness in other matters is simply a cowardly retreat from the one battle you should not be avoiding. As a paid anti-abortion advocate, that might sound like a fairly arrogant and self-serving assertion to make—which is why I've never made it. But David Platt is making it, at least in measure, which is truly a remarkable thing. Abortion is not his pet issue, not by a long shot. By his own humble admission, he has been largely passive in response to abortion. He has poured himself out for all sorts of other issues, but not this one, not yet—which is why he can speak of it now in such forceful terms, without fear of sounding self-righteous. In many ways, those whose vocations are less personally tied to the issue of abortion have less need to mince their words when asserting the primacy of combatting it. When I say passivity to abortion is a sin, I may just be lining my pockets. When David Platt says the same thing, it's much harder to argue with!