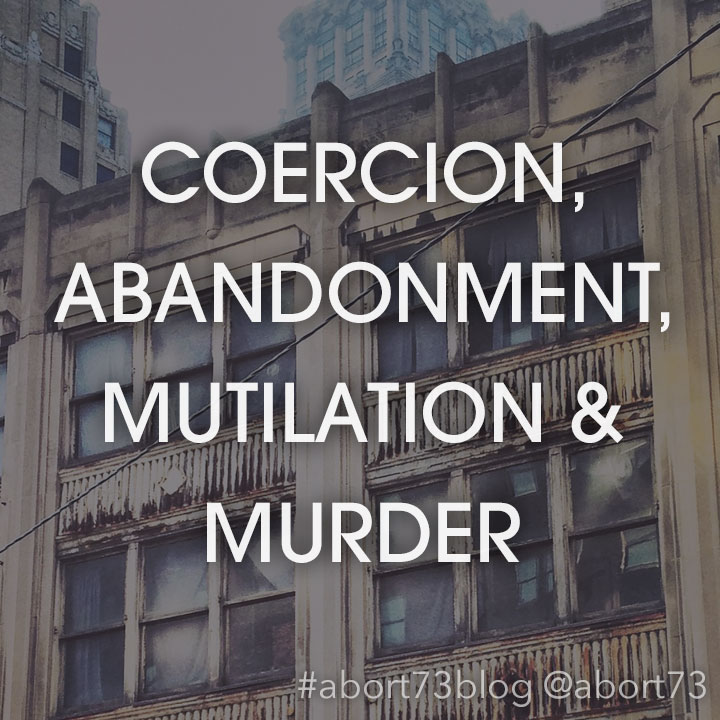 I read yesterday of the woman in Detroit who was kidnapped, duct-taped, doused in lighter fluid, set on fire, and shot early on Saturday morning, all because she wouldn't have an abortion. She was eight-months pregnant. Remarkably, she survived. And so did her son, who was born yesterday.

Almost every day, I read new testimonies of abortion coercion. What happened in Michigan is an example of this same type of coercion carried out to its most extreme end. If you won't kill the baby, I'm going to kill you—or have my friend do it for me, as was the case in this particular tragedy. Jamal Rogers went much further than most reprobate fathers are willing to go, but the same heedless self-absorption rules them all. The man who pressures a woman into sleeping with him, and the man who pressures a woman into aborting her child may not be as far down the path, but they're on the same road.

Though abortion is touted as a liberator of women, it has long been a tool of oppression in the hands of ruthless men. They wield it to get what they want (sex) without having to risk what they don't want (babies). And since more than 84% of all abortions in the United States are performed on unmarried women, it's fair to conclude that male coercion starts long before the woman finds herself pregnant. I won't commit to marrying you, but I want you to commit to having sex with me. I won't give you a ring, but I want you to give me access to your womb. I won't pay for child support, but I will pressure you into killing our child.

Abortion rights advocates will look at this story and try to disconnect it from the broader context of legal abortion. They'll call Mr. Rogers a monster, but they won't admit how much our nation's easy access to legal abortion might have fueled his rage. Think about it. Such unfathomable violence doesn't come from nowhere. It festers and grows. Without knowing the details, it's fair to assume that for seven or eight months, Rogers was leaning on his former girlfriend to have an abortion. Why wouldn't she do it?! He'd already moved in with a new girlfriend. He wanted a clean break. Why wouldn't she go through with the abortion?! Finally, her unwillingness to "take care of the problem" boiled over into a gruesome attack. But what if legal abortion had never been an option in the first place? What if he'd known from the beginning that there was no easy way out? Would he still have resorted to such desperate means? I say no. And while it's true that a man who would murder the mother of his child has little respect for the law, it is also true that the existence of legal abortion has created an expectation in the minds of single, predatory men—the expectation that abortion can and will be employed at their discretion. Had abortion not been a legal option in the first place, I'm fairly convinced that Mr. Rogers would have resigned himself to a much less violent solution.

Whether you think the existence of legal abortion was a precursor to this violence or not, the fate of the day-old son is also worth pondering. The reason so many people are willing to make a rape exception in their condemnation of abortion is because of the idea that children conceived through rape will be a constant reminder to the mother of the assault against her. I've also heard it theorized that the burden of having a rapist father would be too much for any child to bear. For the sake of emotional health, both the mother's and the child's, abortion is put forth as the solution. But here's the problem. According to such thinking, wouldn't we also have to say that the baby boy who was born yesterday in Detroit should be "aborted"? By any objective standard, the attack upon his mother was much worse than rape. And if killing an innocent child is the solution to the emotional trauma of rape, why is it any different for an attack that was even worse? Lord willing, when the mother recovers from her injuries, she will be able to take over the care of her child. But what if she looks into his eyes and sees his father? What then? Would anyone suggest she has the right to euthanize her baby as a means of avoiding that pain, or to avoid the pain of telling him that his dad tried to kill them? Let us not forget that the baby was born a month premature. If he were still in the womb, his life could be violently ended without legal obstacle. So what's the moral difference between killing him here or killing him there? Put simply, there is no difference, which is why circumstances like this should give pause to anyone who thinks it is just for an unborn human being to be killed for the crimes of the biological father.

Finally, many who read of the recent violence in Michigan will decry the actions of Mr. Rogers while reaffirming their conviction that the mother, alone, should decide whether or not to have an abortion. Because the child is living in her body, the thinking goes, she decides whether the child lives or dies. Yes, abortion kills a human being, but as long as that human being is living off the mothers body, she must have the freedom to liberate yourself. The "right to be selfish" argument (as I call it) claims that a woman can't be forced to sustain the life of another human being, even if that human being is her own child. The problem with this argument is that it doesn't work in other contexts, and that was made abundantly clear in three other stories to emerge this weekend. The first is about a mother in Portland who abandoned her three young children in a vacant house. The second story is about a mother in Mexico who gouged out the eyes of her 5-year-old son with her fingers. The final story is of a mother in Philadelphia who murdered her twin toddlers, Adam and Eve.

These mothers have run afoul of the law in HUGE ways for simply following pro-choice logic. They exercised their "right" to liberate themselves from the burden of using their body to sustain dependent children. Not surprisingly, Planned Parenthood has yet to line up in their defense. Reading the accompanying comments and commentary, the immediate assumption is that each of these mothers had something seriously wrong with them. Drugs, alcohol or insanity—something has to account for otherwise unaccountable behavior. But don't lose sight of the fact that abortion is an even worse fate than abandonment or mutilation. It is more akin to murder. And if it's unreasonable and unlawful for parents to abandon, mutilate and murder their born children, why should it be any different for children who are still in the womb?