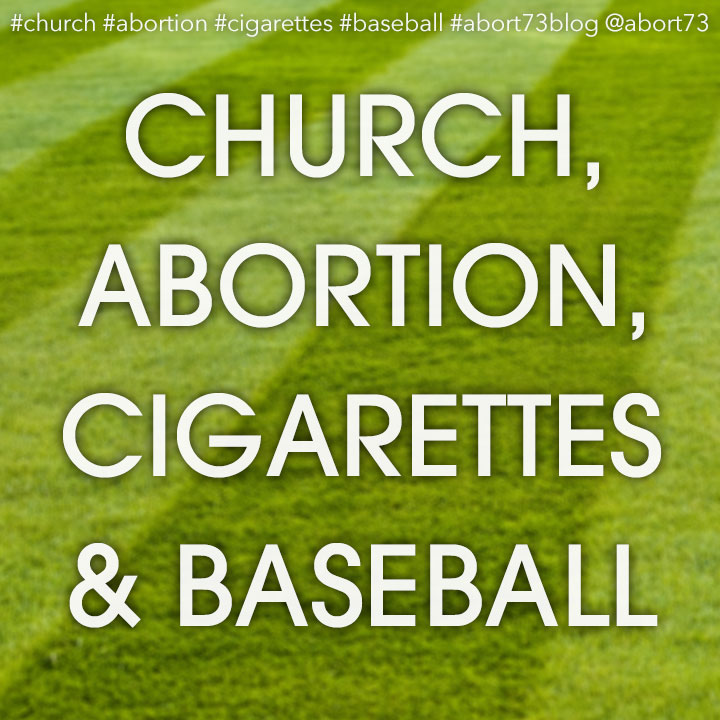 Shortly after we signed up last month, the league parents all received an email urging us to help find local sponsors. One of the sponsorship options included having a large banner placed along the outfield fence. This one piqued my interest. Though we don’t have many local business connections yet, we do have a local church—along with a web-based non-profit I’m always looking to promote!

I decided to buy one banner for our church and another one for Abort73.com—though I assumed from the outset that the Abort73 banner would never be approved. Still, this is the Bible belt; maybe things are different in the South! After making sure our pastor had no objections to the church banner, I submitted payment and artwork for the two banners—separately. The next day, I got an email response to my Abort73 submission. I imagined it to be the “thanks, but no thanks” message. Instead, it simply acknowledged receipt and expressed gratitude that a church would be willing to help out with youth sports. Surprise, surprise!

Still, I wasn’t holding my breath. Time would tell—and sure enough, the call I’d been waiting for came this morning. A league rep apologized but informed me that the board had voted against allowing the Abort73 banner to be put up. I didn’t press him for an explanation. I already knew the explanation. I’ve heard it many times before. Instead, I offered to pay for the Abort73 banner—which had already been printed—and thanked him all the same. No need to be a bridge burner.

As I said, this is the outcome I expected all along, and I bear no ill-will towards the board of directors. On the one hand, it’s easy to understand their dilemma. If they sell to us, they’d have to be willing to sell to Planned Parenthood too—or so the thinking goes. In the name of “fairness,” neither side of the abortion-debate gets a seat at the table. This refusal to take sides, in fact, is the mantra that almost every public entity lives by when it comes to abortion. Since the nation’s opinion on abortion is split right down the middle—and has been for decades—why would any business, organization or celebrity risk alienating half the population?

Here’s a reason. Because it’s the right thing to do. I spent the better part of yesterday sick in bed—which gave me an opportunity to finally read Eric Metaxas’ excellent biography of William Willberforce, Amazing Grace. When Wilberforce first set to work on his two great objects—the elimination of the British slave trade and the reformation of morals—almost all public sentiment was against him. But over time, the unthinkable happened. Benevolence became fashionable and the slave-trade become unfashionable. Public sentiment was turned, bit by bit, as people began caring less about expediency and more about right and wrong.

Ironically, on the same day that I was notified about the Abort73 banner, I received the following email message from the league:

We are a tobacco-free complex. This also includes electronic cigarettes!

Smoking, like abortion, is legal in the United States, and lots of people in this community smoke cigarettes. Nevertheless, the league is willing to take a side on this issue. In fact, if I had wanted to place an anti-smoking banner, I doubt there would have been any problem. But if Phillip Morris had tried to sell their wares on the fence, they would have quickly been shown the door—with nary a thought to “fairness.” When it comes to smoking, public sentiment has turned. In the name of protecting children, smoking has been banned in all sorts of public places—bans that would have been unimaginable 20 or 30 years ago. And yet, abortion kills more innocent third-parties in a week than cigarettes do in a year!

As I said at the outset, I never expected to see Abort73.com emblazoned across the outfield fence. I’ve lived with the abortion double-standard for too long now to have much hope on that front. But the banner for our new church will be there—which raises some interesting questions. Why doesn’t this youth sports league feel threatened by the church in the same way it feels threatened by Abort73.com? Don’t we believe and teach the same things about abortion? Whatever the reason may be, there can be little doubt that in today’s United States, the social cost of publicly opposing abortion is significantly higher than the social cost of publicly proclaiming Christ. In one sense, it’s good that a youth sports league has no problems hanging a church banner on its fence. The church should have a good reputation in the community, but there are two ways to secure a good reputation. The first is to press into the community with so much love and service that they grow to appreciate you despite your "narrow" theology. That's the Wilberforce way. The second is to remain quietly in the background and not make waves—or do anything to upset the status quo. That’s the far more common way.

At this point, I’m tempted to turn this into a tirade against the church’s general failure to publicly intervene on behalf of abortion-vulnerable children. It’s easy to lay blame for our cultural log-jam at the feet of the church—a church that can be just as averse to taking a public stand on abortion as our secular neighbors. Instead, I’ll turn this in another direction. There are lots of doors that are closed to Abort73 for the simple fact that we are a single-issue non-profit dedicated to exposing the injustice of abortion. But many of the doors that are closed to Abort73 are open to the local church—and can be used for great good. The only question is, will we use them? Will the church take advantage of these doors by loving Christ through the active defense of abortion-vulnerable children? Or will we simply bow to expediency and avoid engagement wherever the cultural cost is highest?