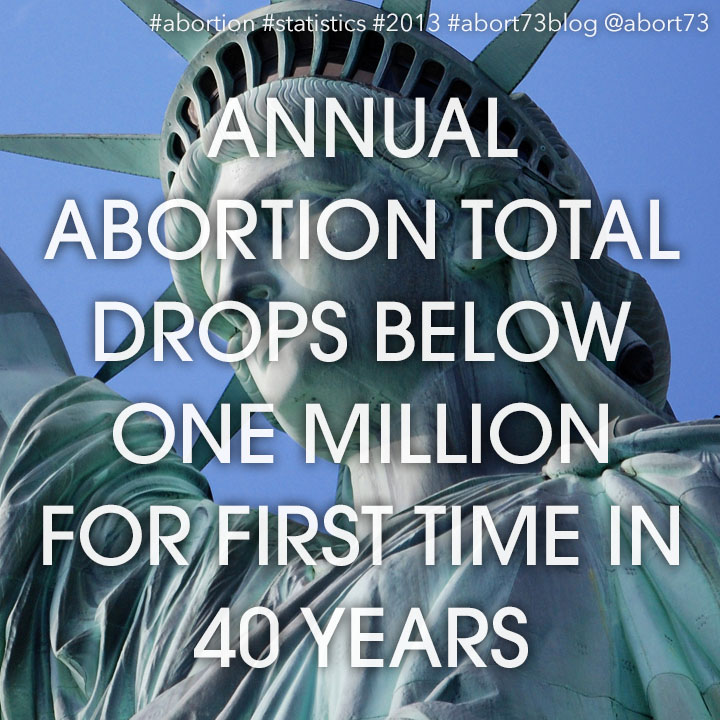 Today is the 42nd anniversary of the Supreme Court decision that struck down all state prohibitions against abortion. Within two years of that verdict—in 1975, the year I was born—the annual abortion total surpassed one million. In the forty years that have followed, more than one million innocent and helpless human beings have lost their lives to abortion every single year—until now. Yesterday, I completed my latest round of analysis on state-level abortion data which revealed that the total number of U.S. abortions in 2013 was approximately 984,000.

Here’s the good news: 2013 marks the first time since 1974 that fewer than one million human beings lost their lives to abortion in the United States.

Here’s the bad news: In 2013, almost one million human beings lost their lives to abortion in the United States.

We might not have the "official" 2013 abortion tally for another year or two. We may never have it since the Guttmacher Institute tends to only publish abortion statistics in three year increments and the CDC data is perennially incomplete. Either way, I feel pretty confident in the reliability of my calculation model—which correctly estimated the 2011 total (1.06 million) well in advance of Guttmacher. If you’re interested in the mechanics of my estimate, I'll briefly explain the process at the end. In the meantime, I’d like to turn our eyes forward as we continue our labors to expose and eliminate the injustice of abortion.

Earlier this week, I heard from an Abort73 supporter who took it upon himself to challenge his friends to join him in a donation-matching pledge for Abort73. He and his family wanted to do something practical and significant in response to the 42-year anniversary of legal abortion. Amongst themselves, this group has committed to give $3,000 in matching donations through the end of the month. That means, anything you donate through our campaign page will automatically be doubled. Here’s how he explained his decision:

Recently, my wife and I have heard loud the call to give generously.  The Lord is pointing our hearts toward the only treasure that lasts–Him.  He calls all who are His to display this treasure to the world. “For where your treasure is, there will your heart be also.” (Luke 12:34)

We give to Abort73 because the Lord loves justice (Psalm 37:28), because righteousness and justice are the foundation of His throne (Psalm 89:14), because we are called to expose the works of darkness (Ephesians 5:11), because we must rescue those who are being taken away to death and hold back those stumbling to the slaughter, because we do know of this great evil of abortion and He who weighs our hearts perceives it (Proverbs 24:11), because whatever we do or do not do for the least we do unto Jesus (Matthew 25:40,45), and because we want to let our light shine before others that they may see our good works and give glory to our Father in heaven (Matthew 5:16).  All of this is at the heart of Abort73's mission.

I challenge YOU to give.  A group of donors have generously agreed to match your donation, dollar-for-dollar, up to $3,000.  Speak for the weak, and give!

By the latest count, there are just over 2,700 abortions in the United States every day. How do we intervene on behalf of abortion-vulnerable women and children? One way is by introducing current and future mothers and fathers to the most comprehensive, accessible and engaging abortion-education in the world—Abort73.com. And one way to help us reach more people in 2015 is to double your donation through the $3K Gift-Matching Challenge. Please donate today!

The Centers for Disease Control (CDC) publishes a comprehensive collection of abortion data each year—though it’s always about three years behind. In November of 2014, they released abortion statistics for 2011. Their information is incredibly useful on a state-by-state level and for identifying trends, but they are hamstrung by the fact that California, Maryland and New Hampshire do not publicly release their abortion data—and New Jersey does not collect data from private abortion clinics. As such, their annual U.S. abortion total is significantly incomplete.

The Alan Guttmacher Institute—named for former Planned Parenthood president, Alan Guttmacher—publishes abortion data that is privately collected for all 50 states (+DC), but they only do so every three years. Their most recent data is also for 2011. For comparison, the CDC reported that there were 730,322 abortions in 2011, but Guttmacher reports that there were 1.06 million.

All of the abortion data that the CDC uses comes from state health departments. Oftentimes, that data is published long before the CDC releases their annual abortion surveillance report. To date, 2013 abortion data is already available for 27 states. The total number of abortions from those 27 states comes out to 262,825. The abortion total for those same 27 states in 2011 was 283,091. Taking 1,060,000 (the actual number of 2011 abortions) and dividing it by 283,091 (the number of 2011 abortions for our 27 reporting states), we get 3.744379. Multiplying that by the number of abortions for the 27 reporting states in 2013 (262,825), we get 984,116. Applying this same approach for 2012, for which there are now 38 states reporting—an estimated 1.02 million abortions occurred in 2012. I first reported this number a year ago, it has not materially changed with the addition of added reporting states.

To see the data table used for these calculations, which also includes birth data, state abortion ratios and year-over-year change, click here. Between 2011 and 2013, abortions are down 7.16% while births are down .39%. For the latest abortion trends in your area, visit our "State Abortion Facts" page and click on your state!