Abort73.com > Abort73 Blog > Abortion is the Antithesis of Peace

Abortion is the Antithesis of Peace 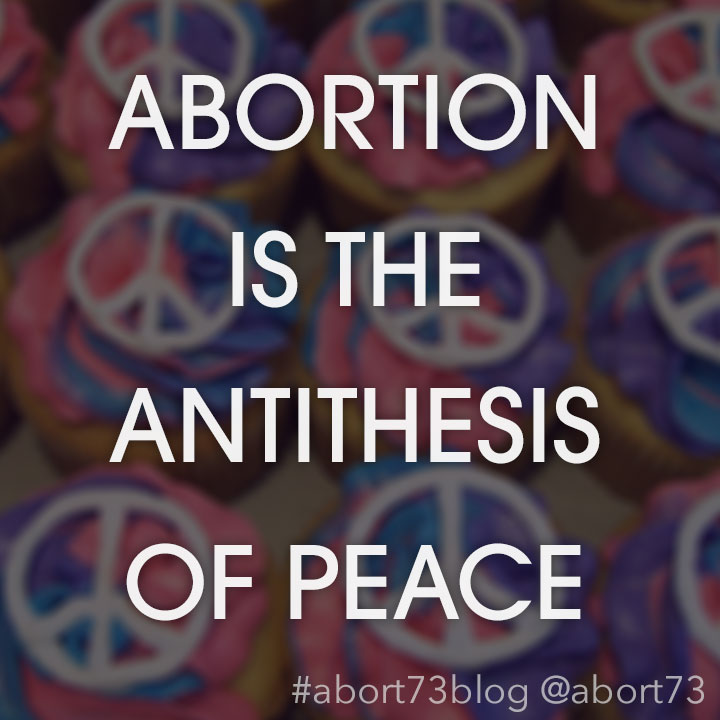 Many years ago, Mother Teresa declared that the world's greatest destroyer of peace is abortion. Though that's the kind of statement we might expect from a nun, it's a rather extraordinary one when you consider Mother Teresa's context and pedigree. She did not live a life of sheltered isolation. She lived and breathed amongst the world's most impoverished and diseased. In fact, she ministered to the very portion of the population that abortion-advocates say should never be born. But instead of calling for an increase in "family planning," she called for the elimination of abortion—and she did so while receiving the world's most prestigious prize for peace.

Whereas abortion aims to eliminate poverty and disease by killing the afflicted, Mother Teresa sought to eliminate poverty and disease by caring for the afflicted. One act is built on mercy and peace; the other act is built on violence. And though Mother Teresa may be the unlikeliest recipient in the history of the Nobel Peace Prize, her diminutive stature did not prevent her from becoming an enormous cultural icon. Her life and ministry made her uniquely qualified to talk about peace, and her credibility as an advocate for peace remains off the charts.

I bring Mother Teresa up because of a video Abort73 released this week on the topic of abortion and peace. The purpose of the video is twofold. First, it examines the disconnect between our cultural celebration of "peace" as a an abstract ideal and our rejection of peace as a meaningful life ethic. Second, it draws upon selected statements from some of modern history's most iconic defenders of peace to demonstrate that abortion utterly violates the most foundational principles of peace.

In terms of popular culture, I doubt that "peace" and "love" have ever been so... popular. I say that because I have a 9-year-old daughter, and almost everything she wears is emblazoned with some variant of these two virtues. Hearts and peace signs are everywhere! As noted in our new video, peace is big business, but the kind of peace that dominates the juniors section at the local mall has almost nothing to do with the genuine article. The very girls whose wardrobes claim an unfailing devotion to peace seem far more devoted to ease and pleasure. And they're not alone. In large measure, our supposed principles don't match our practice. We choose peace when it's convenient. When it's not, we choose abortion.

Fifty-five years ago this month, the peace sign made its public debut in Trafalgar Square, London—during an Easter weekend march. The now-ubiquitous symbol was designed by Gerald Holtom for the Campaign for Nuclear Disarmament but quickly took on a life of its own. The CND continues to use the insignia Holtom created for them, but their decision to forego a copyright opened the floodgates for its global saturation. As far as icons go, I suspect only the heart (and perhaps the cross) is used more often. Though, there are plenty of ominous theories about the history of the symbol, none can be definitively substantiated. According to published interviews with Holtom, the design is a combination of two concepts. The first is a stylized man in a position of despair—"with hands palm outstretched outwards and downwards in the manner of Goya's peasant before the firing squad." The second is the overlap of the letters "N" and "D" (for Nuclear Disarmament) from the semaphore alphabet.

More interesting to me than either of these explanations is the rationale provided by Eric Austen, the man who is most responsible for bringing the design to the masses. The ceramic badges he produced of Holtom's design were distributed at the march and were specifically designed to withstand the rigors of history. A note that accompanied each badge explained that in the case of a nuclear holocaust, the CND badges would be among the few human artifacts to survive. Since their portability and longevity far exceeded the cardboard signs produced for the march, historians credit Austen for the logo's singular assent. Pop culture's infatuation with the peace sign began with Austen; he was the first person to make it "wearable."

Explaining the visual significance that drew him to the design, Austen suggests that the logo's interior is a runic symbol for the death of man while the outer circle is a symbol for the unborn child. This interpretation was repeated on at least one occasion by a CND spokeswoman, who was explaining the symbol's significance in a United States newspaper interview. Reading that, the peace sign suddenly took on a new level of significance for me. How ironic (prophetic?) that the global symbol for peace, which remains an almost unparalleled pop culture phenomenon, has an explicit connection to unborn children. Why is this significant? Because as we highlight in the video, human beings are never more threatened by violence than when we are in the womb. Unborn children enjoy less peace than anyone.

In America, almost 25% of unborn children are killed by abortion. In China, the percentage approaches half. In Russia, there are more abortions than births. In other words, you're safer in a war zone than in the womb. Not even the most volatile locations on the planet can rival death rates of this magnitude. In light of that fact, and in light of Mother Teresa's astute observation that abortion is the greatest threat to global peace, I decided to see what other iconic heralds of peace have said on the subject—having no idea what the results would be. Starting with a list of Nobel Piece Prize winners, I simply looked for names I recognized. That endeavor yielded seven of the names on my short list of "most iconic advocates for peace." Gandhi, who somehow never won the award, made up the eighth (following Gandhi's assassination, the 1948 Nobel Peace Prize was left vacant in his honor).

From there, I poured over their most famous quotations, looking for comments in regard to the sanctity of life and the significance of children. In Gandhi's case, I read a short book about his various teachings on birth control. These are the statements that were included in the video:

"In the 21st century, I believe the mission of the United Nations will be defined by a new, more profound awareness of the sanctity and dignity of every human life…"
Kofi Annan, Nobel Peace Prize, 2001

"Medical men will earn the gratitude of mankind, if instead of devising artificial means of birth-control they will find out the means of self-control… It is wrong and immoral to seek to escape the consequences of one's acts..."
M. K. Gandhi, 5-time Nobel Peace Prize nominee

"Every man must decide whether he will walk in the light of creative altruism or in the darkness of destructive selfishness..."
Martin Luther King Jr., Nobel Peace Prize, 1964

"There can be no keener revelation of a society's soul than the way in which it treats its children..."
Nelson Mandela, Nobel Peace Prize, 1993

Though the majority of these statements were not made in the context of abortion, it's easy to see how they apply to abortion. And while I'm not suggesting that the Nobel Peace Prize Committee has the market cornered on genuine peace, they are generally regarded (by the secular world) as the most authoritative and credible source on the subject—which is why the above statements are so significant. With the exception of Martin Luther King, these are not American evangelicals, and yet these most celebrated ambassadors for peace speak of the sanctity of human life, the unparalleled value of children, and the importance of protecting the vulnerable.

At least one of the persons quoted above, Elie Wiesel, explicitly rejects applying his remarks to abortion—or at least he did twenty years ago. His bristling at their "pro-life" application is ironic in light of the broader arc of his message. Consider these words from Elie Wiesel, who is one of the Holocaust's most storied survivors:

I swore never to be silent whenever and wherever human beings endure suffering and humiliation. We must always take sides. Neutrality helps the oppressor, never the victim. Silence encourages the tormentor, never the tormented.

Wiesel calls it a "blasphemy" to compare abortion to the Holocaust, rationalizing that the "monumental proportions" of the Holocaust make it incomparable to any other "human tragedy." He calls those who oppose abortion, "fanatics," and declares that he is "against fanatics everywhere." It's worth weighing this remark against another quotation from Martin Luther King, Jr. He said, "When you are right you cannot be too radical; when you are wrong, you cannot be too conservative." In my mind, Wiesel's use of "fanatic" and King's use of "radical" are synonymous. To push back against accepted, cultural mores always requires a level of "fanaticism"—and it's almost certain that those brave souls who harbored and hid German Jews were labeled "fanatics" by the culture at large.

In terms of sheer numbers, Wiesel is right. Abortion and the Holocaust are incomparable. Abortion kills more human beings every year than the Holocaust did in its entirety. What is most tragic about Wiesel's dogmatic refusal to recognize any parallels between abortion and the Holocaust is that he, of all men, should know better. He rejects the comparison because he doesn't consider unborn human beings to be morally significant. He has mentally classified them as sub-human—which is precisely the rationale that was used to justify the Holocaust. It was entirely built on the assertion that because certain human beings are morally superior to others—they have the right to exterminate the less desirable.

Philosophically, Mother Teresa defended her assertion that abortion is the greatest destroyer of peace this way. If a mother can kill her own children, what is left to prevent me from killing you or you from killing me? There is nothing left. If the sacred, relational bond between mother and child becomes polluted by violence, what is left to prevent lesser relationships from also becoming violent? The bottom line is this. Abortion and peace are mutually exclusive. To embrace one is to reject the other. If you're genuinely for peace, you can't be for abortion. If you doubt that, simply ask yourself whether abortion promotes peace, harmony, and wholeness.

The strong and powerful need no peace. They can protect themselves by force. It is the weak and vulnerable whose livelihood depends upon peace. So until there is peace for the most vulnerable, there is no peace at all.