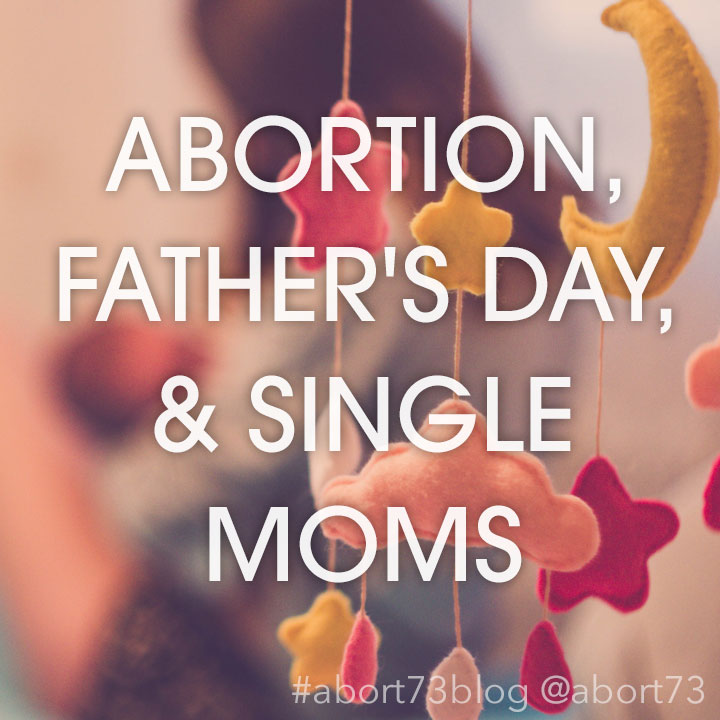 Chances are, you've never thought about the fact that the federal legalization of abortion and the federal recognition of Father's Day occurred within nine months of each other—on the ill-fated watch of President Richard Nixon. I certainly hadn't marked the connection, until setting out to examine the relationship between abortion and single motherhood. I now see a sad irony in the proximity these two events share on our historic timeline.

In 1970, two years before Father's Day was finally given formal recognition, less than 12% of American families with minor children were helmed by single mothers. Today, that number has risen to 26%. And since more than 40% of American babies are currently born to unwed mothers, the percentage of single-mother households is likely to keep going up. But why is that? Have you ever stopped to think about abortion's relationship to single motherhood? Economists Steven Levitt and Stephen Dubner certainly have.

Back in 2009, Levitt and Dubner published the surprise bestseller, Freakonomics—which contained a chapter on America's declining crime rate. The authors contend that the reduction in crime that began around 1990 doesn't owe to better policing or a better economy. It owes to better abortion access. Starting in 1973, they argue, abortion began preemptively eliminating future crime by reducing the number of mouths to feed and eliminating children with the highest propensity to become criminals—specifically those born to young, single mothers.

Despite the sinister eugenic underpinnings of such thinking—and the barbarity of killing children in the womb for crimes they might commit as adults, abortion advocates have embraced the purported crime-reduction hypothesis and made it part of the cultural narrative. There are all sorts of problems with the conclusions drawn out by Levitt and Dubner, but I'm going to focus on just one.

In the United States, almost all abortions are performed on single women. This should come as no surprise, since abortion is largely sold as a means for unmarried women to avoid the difficulties of single parenthood. You might think then that abortion helps create better birth outcomes for the children who are born. That is the assumption driving Levitt and Dubner's analysis, but the data does not bear such thinking out. Simply look back at the numbers from paragraph two.

The 2015 book, Complications: Abortion's Impact on Women, devotes a chapter to the purported connection between abortion and crime reduction. Noting that abortion and illegitimacy rates actually rise and fall in tandem, the book speculates that Freakonomics' conclusions about abortion may be entirely backwards. Since the legalization of abortion, the percentage of children born into undesirable circumstances has not been reduced; it has grown dramatically. The authors write:

In Freakonomics, Dubner and Levitt note that since the legalization of abortion, conceptions in the United States “rose by nearly 30 percent” while “births actually fell by six per cent.” One explanation for this increase in conceptions and abortions, according to Ramesh Ponnuru, is that an “effect of legalized abortion was to increase the rate of careless conceptions. Its availability made it easier for people to have casual sex and to dispense with contraceptives.”

Based on the numbers above, up to a third of all the children aborted in the United States may have never been conceived if abortion had simply remained against the law. That is the tragic irony of abortion-on-demand. Just as birth control lowers the cost of sex, so abortion lowers the cost of conception. The end result is more sex and more conceptions—since you tend to get more of what you subsidize. This, however, is only half the picture. Not only has abortion helped fuel sexual intemperance, it has also lowered the cultural expectations placed upon fathers. The authors of Complications continue:

Commenting on why there has been such an increase in the number of single mothers, Akerlof and colleagues raise the point that abortion made “shotgun” weddings unnecessary. Prior to the legalization of abortion, if a young woman was found to be pregnant there was far more pressure on the father to marry her and take responsibility for the child. With abortion easily obtainable, fathers of children were less likely to feel pressured into marrying the mother because if she was unwilling to have an abortion, there was less social expectation of him to make the sacrifice of marrying her and caring for the child.

In giving the fathers of "illegitimate" children an easy out, abortion has lowered the cost of impregnating women you're not married to—resulting, of course, in more out-of-wedlock conceptions. In the black community, which suffers a disproportionally large number of abortions, the impact has been even worse. Seventy-one percent of black children are born to single mothers, and 55% of black families with minor children do not have a father in the home.

Sadly, among children who survive both abortion and paternal abandonment, very few are placed for adoption. This too seems to be a casualty of abortion. Prior to Roe v. Wade, most children born to unwed mothers still wound up in homes with a father through marriage or adoption. Today, that is nowhere near the case. Why is this a problem? Because Levitt and Dubner are right about one thing. Statistically speaking, single parenthood is devastating to the health, wealth, and development of parents and children alike.

In saying that, I realize I am stepping on lots of toes. Because single parenthood has become so pervasive, its relationship to negative social outcomes is awkward and difficult to talk about. And so we tend not to talk about it—especially if we're ideologically opposed to abortion. In our eagerness to steer women away from abortion, we can easily undersell the very real perils of single motherhood. Frederica Mathewes-Green is a pro-life author who does talk about the disadvantages of being raised by a single parent, and I'm grateful for her candor. Consider these remarks from her book, Real Choices:

The problems of single parenting are so daunting and endless to both mother and child that it should never be encouraged.

While single parenting is a prescription for poverty, loneliness and decreasing sexual bargaining power for women, it is a certified disaster for children.

Many people find in these numbers a justification for abortion, without recognizing that the legalization of abortion has only increased the number of single-parent households. By their calculations, ending the life of an unborn human being is less evil than allowing that child to be born into poverty or instability. In making this assessment, they fail to grasp just how evil it is to kill an innocent and helpless human being—but those of us on the other side of the issue may be missing something too.

When someone calls abortion the lesser of two evils, they're not speaking in moral terms, they're speaking in pragmatic terms. They don't call single parenthood "evil" because it tends to result from evil behavior (i.e. fornication, rape, abandonment, or divorce); they call it evil because it has a negative social impact on families and communities. In our eagerness to unmask what is ethically vacuous in our opponents' position, we must not miss what is true.

Convincing a young woman to not have an abortion spares her child from the most immediate and dangerous threat to its life, but plenty of lesser threats remain. Single parenthood is infinitely preferable to abortion, but it is not the solution to abortion—not by a long shot. In many ways, it perpetuates the problem through repetition. Single parenthood begets more single parenthood. What is the solution then? Frederica Mathewes-Green suggests a return to the two institutions that proved the most serviceable in the past. She writes:

Explore carefully the possibility of marriage to the baby's father, the person intended by nature to meet the woman's and the child's continuing needs. The widespread expectation that these dads are disposable—or, even worse, contemptible—damages us all in myriad ways. When men are offered a parental role that is urgently needed and worthy of respect, they may be moved to accept it; the alternative of single parenting damages mother and child too deeply...

Where marriage is inadvisable, the next solution is adoption...

It is no surprise to learn that adopted children enjoy many advantages over single-parented children. They grow up in homes which enjoy a much higher level of income, and their adoptive moms are, on the average, older and better educated. But the birth mothers who choose adoption win, too. Compared to a single mom, a birth mom who relinquishes her child is more likely to get a good education, get a job, and get married.

The Brookings Institute tells us that for teens, the pathway from poverty to the middle class is a remarkably straightforward one: 1) Graduate from high school. 2) Get a full-time job. 3) Don't get married and have children until you're 21. Only 2% of the American adults who do those three things wind up living in poverty, which makes it a remarkably safe bet.

If you've already strayed from the Brookings path, so to speak, be encouraged that there are no perfect indicators for future social outcomes. Much of life consists in making the best out of difficult circumstances. But if you're young enough to still have these decisions in front of you, or are counseling someone who does, don't ignore these predictors either. Too much hangs in the balance. For more than a quarter of the kids in America, the third Sunday of each June is just another fatherless day—but it doesn't have to be like that. It shouldn't be like that.