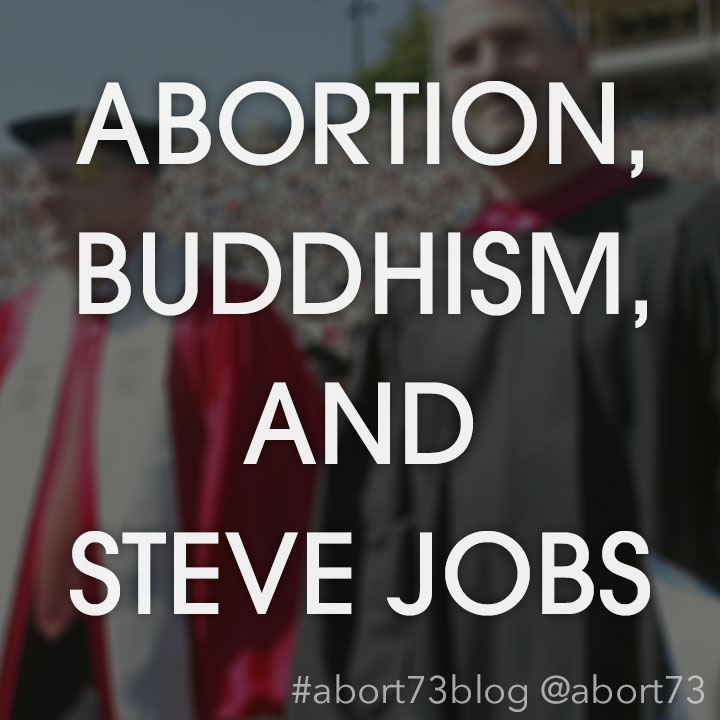 Last's week blog post featured a story of thanksgiving from a 20-year-old Wisconsin woman whose mother gave birth to her at 16. Shortly after it went up, we received testimony expressing a very different kind of thanks. A woman from Scottsdale, AZ writes:

My mom was 20 and attending Northern Arizona University in 1967 when she became pregnant by a man she had only recently met. She was reluctant to do anything illegal. Since my dad came from a high-profile family in Washington DC, he also agreed that an illegal abortion was not plausible for them. So my parents married and my mom quit school. I was born in 1968. My sister was born in 1969. After abortion became legal in 1973, my parents aborted two of my siblings because they did not want a large family. The fact that abortion was now legal made the decision easy for them. Later she would despair over the decisions that she made and crusade against legal abortion.

People will say that we have to reach hearts and minds.... which is true. But both my sister and I would not be here if abortion had been made legal just a few short years earlier. The law is supposed to protect the innocent. And in my case, it did. I have four children and my eldest is leaving for college in a few short hours. I can't imagine a world without my precious children.

I can't really thank my mom for choosing to let me live. However, I would have liked to have the names of the legislators who staved off legal abortion.

This story illustrates an important point and reminds me of one of the Martin Luther King Jr. quotes featured on Abort73's Role of Law page. Dr. King said, "It may be true that the law cannot make a man love me, but it can keep him from lynching me, and I think that's pretty important." Statistically, it's not hard to see the influence legalization has had on abortion's bottom line. Without question, most of the women having abortions in the United States today would not do so if it was still a criminal practice. In that light, it's fair to wonder how many people born in the 1950's and 60's would not be alive today had anti-abortion laws been struck down sooner.

By all accounts, Steve Jobs is one of those people. His recent resignation as Apple's CEO has spawned a slew of career retrospectives, all trying to quantify the remarkable influence he's had on the world. Fairly well-publicized is the fact that Jobs co-founded Apple as a 20-year-old college dropout—in the garage of his working-class parents' home. Less well known is the fact that those working-class parents are not biologically his. Jobs was adopted in 1955, after he was born to an unmarried college student. He recounts the story at the beginning of the 2005 commencement address he delivered at Stanford University (an address well worth watching in its entirity). Jobs notes that his biological mother was adamant that he be adopted by college graduates, no doubt to ensure he would be well provided for. But when it came time to take him home, the well-educated couple she'd lined up for the adoption decided they wanted a girl instead. And so Paul and Clara Jobs got the call they'd been waiting for. When the birth mother later realized that neither parent had ever been to college, and that Paul hadn't even finished high school, she refused to sign the necessary paperwork to finalize the adoption. It would be months before she relented, and only then when the Jobs promised her they would send Steve to college.

Seventeen years later, Steve enrolled at Reed College, but dropped out six months later when he realized he was burning through his parents' savings at a breakneck speed. No longer enrolled as a full-time student, he audited a few classes that interested him, slept on dorm room floors, returned Coke bottles for money, and had one good meal a week at the Hare Krishna temple. Then he started a company called Apple, became a millionaire, got fired, started NeXT, bought and transformed Pixar, came back to Apple, saved the company, and became one of the most influential men in American history. His fingerprints are on almost everything, and his current net worth exceeds $8 billion—this from a man who today likely would not have been born.

So my first observation is this: the socio-economic costs of abortion are huge. People are the most valuable natural resource in the world and abortion is killing them in droves. Even if you throw the freakish, transcendent geniuses like Steve Jobs out the window, and all of the wealth and jobs they generate, abortion has killed millions of everyday workers, parents, and small business owners—all of whom would have contributed to a much healthier society. They may not have been world changers in an individual sense, but they certainly would have been in the whole.

Second, Steve Jobs publicly testifies to the fact that the difficulties in his life have made him a better person. Had he been adopted by the affluent attorney originally slated to be his father, would there even be such a thing as Apple computer? Not likely. Abortion is sold as a way to keep kids from having to grow up in less than ideal circumstances, but history is full of accounts like Steve Jobs'—of men and women who were shaped by the very adversity they overcame. No matter what his personal views on abortion, his entire life flies in the face of conventional, pro-choice thinking.

So what is Steve Jobs' personal position on abortion? I have no idea. He is legendary for playing things close to the vest, but I'm guardedly optimistic. Despite being called "an archetypal Democrat," he has publicly taken teacher's unions to task, and has been surprisingly unyielding in his insistence that pornographic material be kept out of Apple's app store. In an email exchange with a journalist accusing him of gross censorship, Jobs responded, "You might care more about porn when you have kids." If he's willing to protect children from one publicly-sanctioned vice, why not another? Furthermore, Steve Jobs identifies himself as a Buddhist. As an aside, I can't help but wonder how much influence those free meals from the Hare Krishna temple had in drawing him towards Eastern religions. What if a Christian church had been offering those meals instead? More to the point, though "there is no single Buddhist view on abortion" (according to a BBC article on Buddhism and abortion), "traditional Buddhism rejects abortion because it involves the deliberate destroying of a life." The recent discovery of 2,000 human fetuses at a Bangkok temple has caused more Buddhist monks to speak out against abortion. We might also speculate that Jobs' adherence to a vegetarian diet is indication that he believes all life to be sacred. Ironically, it is Jobs lack of philanthropic giving which gives me the most hope of all. His unwillingness to join fellow billionaires Bill Gates and Warren Buffett in pledging to devote the bulk of his fortune to charitable giving has been roundly criticized by some, but when you consider the kind of pro-abortion, population-control policies at the forefront of the Gates Foundation agenda, I count Jobs' refusal a huge plus. If it's a question between giving millions of dollars to population-control groups or not giving any money at all, I'd choose the latter every time. Finally, not only was Steve Jobs a prime candidate to be aborted himself, but he is also the father of a grown daughter who was born out of wedlock in post-Roe America (1978). Whatever his opinion of the pregnancy was at the time, I suspect he is grateful that his oldest daughter is alive and well today.

Jobs concludes his talk to Stanford's class of 2005 by reminding them of their mortality: "Remembering that I'll be dead soon is the most important thing I've ever encountered to help me make the big choices in life, because almost everything—all external expectations, all pride, all fear of embarrassment or failure—these things just fall away in the face of death, leaving only what is truly important." For more than thirty years, he tells them, he has started every day the same: by looking in the mirror and asking, "If today were the last day of my life, would I want to do what I am about to do today?" Whenever the answer has been "no" for too many days in a row, he knows something has to change. Life is too precious to waste—which brings us back to the topic at hand. No matter what your view of abortion, there's no getting around it's social ramifications. In the United States alone, more than 50 million innocent human beings have lost their lives to abortion. And their deaths affect all of us. If you're a jaded, self-absorbed, skeptic, you argue that the world is better off without them. But if you love people and see potential in every solitary life, how can you not weep for what might have been?