A Christian Celebration of Planned Parenthood 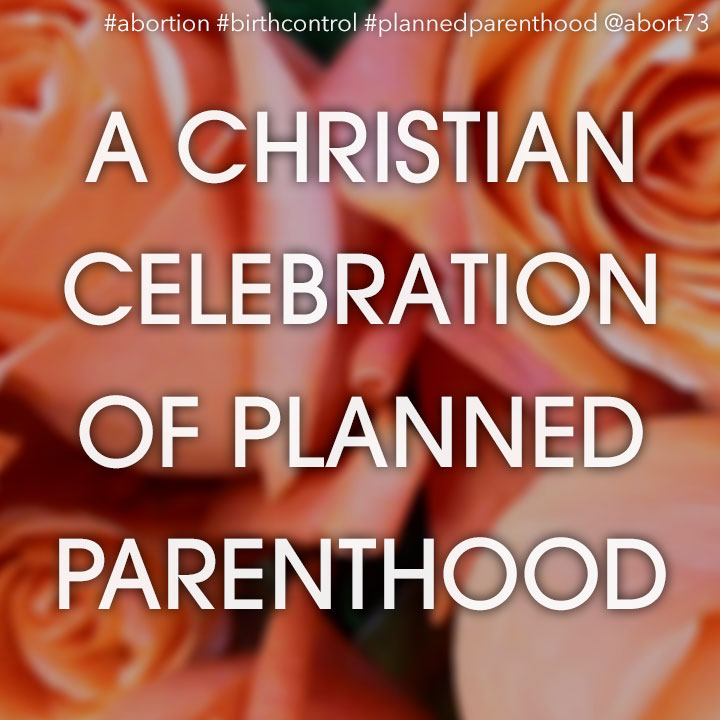 As someone who has long viewed Planned Parenthood as public enemy number one, these statements are hard to stomach—but that perhaps is the point. Blogger Steve Austin, who posted a followup interview with Sarah Parker, calls it messy grace. How are Christians to love those we disagree with? How are we to love our enemies as Jesus commanded? These are difficult questions to be sure—questions most all of us should wrestle with more than we do. At the very least, Sarah Parker is doing that.

Here is what I like about Parker’s gesture towards Planned Parenthood. It was personal, it was proactive, and it included a declaration of love. Specifically, she writes in her letter that the flowers are a “symbol of grace, friendship and unconditional love.” In an abortion debate so often marked by the casting of verbal insults from ivory towers, the intimacy and vulnerability of this approach is refreshing. Though Planned Parenthood is a billion-dollar corporation that daily kills close to 1,000 innocent and helpless human beings, it is largely staffed by people who genuinely believe they are serving women in need. That is worth remembering.

I also commend Parker for the simple fact that she did something, instead of tacitly accepting the status quo. Most abortion opponents take an entirely hands-off approach, hoping against hope that this ideological impasse will simply resolve itself. For fear of doing the wrong thing, most of us default to doing nothing at all. I wish more of us had Parker’s initiative! Finally, Sarah Parker is making a tangible effort to love her enemies. Borrowing the words of Steve Austin, “that’s an idea I can get behind.”

All that being said, here is what I don’t like about Parker’s gesture towards Planned Parenthood. The content of her letter—specifically the affirmation it offers—goes way too far and is propped up by an almost complete misunderstanding of Planned Parenthood’s origins and objectives. If Sarah Parker had simply delivered the flowers and apologized for any Christians who have engaged Planned Parenthood in a spirit of hatred, I would have nothing to take issue with—but she didn’t. Explaining to Steve Austin why she is willing to “celebrate” Planned Parenthood, she writes:

I know the founding of Planned Parenthood in the early 1920’s was to support, protect and defend the plight of femininity. Their motto is “We care. No matter what.” That’s stunning! The letter actually was two-fold: an apology and a thank you. Yep, I said thank you to Planned Parenthood. I thanked them because, at their roots, they cared, no matter what. That sounds a lot like Jesus. Have they wandered from that? Yep. Can they get back to where they started and even better? Of course.

The “plight of femininity” is an odd phrase. Google can find only four other uses of it. When paired with the three verbs Parker attaches to it, the expression becomes even more cryptic. What does it mean to support, protect, and defend the plight of femininity? Would feminists count that a good thing or a bad thing? In normal contexts, a plight is something to be relieved or overcome, not something to be supported, protected, and defended. The irony here is that while Parker is trying to compliment Planned Parenthood with a clever turn of phrase, her unwitting indictment lands much closer to the mark. Planned Parenthood is not supporting, protecting, and defending vulnerable women so much as it is supporting, protecting, and defending the institutional exploitation of women. When it comes to the plight of femininity, Planned Parenthood is a driving force—and they have been from the very beginning.

It is not an overstatement to say that Planned Parenthood was founded to destroy marriage, destroy monogamy, and destroy the Christian faith. If you doubt that assessment, read Margaret Sanger’s manifesto, The Pivot of Civilization. The pivot of civilization, according to the woman who founded Planned Parenthood, is not God or family. It is birth control. In fact, Sanger declares that there is “no higher morality than the intelligent practice of Birth Control.” She calls religion “sanctimonious debauch” and blames the church’s “fiendish” attempt to restrain “the expression of natural (sexual) impulses” for virtually every social ill.

Long before Planned Parenthood began employing the feel-good motto, “Care. No matter what”—which didn’t appear on their website until November 2012, Sanger made use of a far more revealing mantra: “No Gods and No Masters.” In the first issue of her periodical, The Woman Rebel, Sanger declared marriage to be a “degenerate institution.” On top of all that, Margaret Sanger was an avowed eugenicist. She writes:

Birth Control which has been criticized as negative and destructive, is really the greatest and most truly eugenic method, and its adoption as part of the program of Eugenics would immediately give a concrete and realistic power to that science. As a matter of fact, Birth Control has been accepted by the most clear thinking and far seeing of the Eugenists themselves as the most constructive and necessary of the means to racial health.

By the time Sanger’s American Birth Control League was re-branded as Planned Parenthood in 1942, Sanger had already been stripped of its presidency for holding views that were deemed too radical. Planned Parenthood as we know it today is actually a softer and more sanitized version of Sanger’s original vision. In other words, this notion that Planned Parenthood has simply lost its way is a naive and untenable one. Even if they dialed things all the way back to the beginning, their ideology would be no less condemnable. Birth control is not the pivot of civilization—though it did become the foundation upon which Planned Parenthood built its abortion empire.

Year after year, Planned Parenthood sells more birth control and performs more abortions. Is that a coincidence—or is it possible that birth control is not the silver bullet it’s purported to be? According to Planned Parenthood’s annual report for 2014-2015, which was just released yesterday, they administered 1.2 million pregnancy tests over the 12-month period. We don’t know how many of those women were found to be pregnant, but we do know that Planned Parenthood aborted 323,999 babies, provided 17,419 “prenatal services,” and referred 2,024 women for adoption. Based on these numbers, we can conclude that more than 94% of the pregnant women who come to Planned Parenthood have an abortion. To this, Sarah Parker responds:

I’m not saying, “Here’s a bouquet of roses and a little note, I totally am ok with the 55,772,015 abortions that have been performed since Roe v. Wade was finalized!” I’m saying, “Hey, I choose to love you unconditionally, like Jesus, and I’m sorry for those who don’t. And I congratulate how you love—even if it’s different than mine. Even if the outcome is something I strongly disagree with, your intent was spot on.”

I don’t need you to agree and I don’t need to agree with you. I do need for you to know that you’re unconditionally loved, as-is, not when you finally start behaving like I want you to. The celebration of people–wherever they’re at–is vital to them actually experiencing that love. If you’re unaware of your own value or if you feel lacking in your capacity to love people who are different than you, go spend a little time with Love Himself.

Here again, Christians should be loving their neighbors unconditionally. I take no issue with that assertion. The real question is, how do Christians love unconditionally? Are we to unconditionally affirm everything our neighbors do—even if they’re killing the most innocent and helpless members of the human community, or is it possible to unconditionally love someone while still condemning their behavior and calling them to repentance? The context in this case is a giant corporate entity, but these questions are just as applicable to our unbelieving neighbors. Is it sorrow that leads to repentance or words of affirmation and apology? I would suggest that almost none of us are getting it right. Jesus cautions us against casting the first stone, but he also tells people to go and sin no more. Some of us are too willing to affirm people as they are, without warning them of coming consequences. Others take too much delight in heaping condemnation upon those they disagree with, little considering that all men and women bear the image of God. If you’re not sure which side of this spectrum you fall on, Sarah Parker gives us a handy reference point. Those who love what she did may be failing to proclaim a central tenet of the gospel: Repent for the kingdom of God is at hand. And those who hate what she did may be failing to consider that Jesus was a friend to tax collectors and Jesus was a friend to sinners.