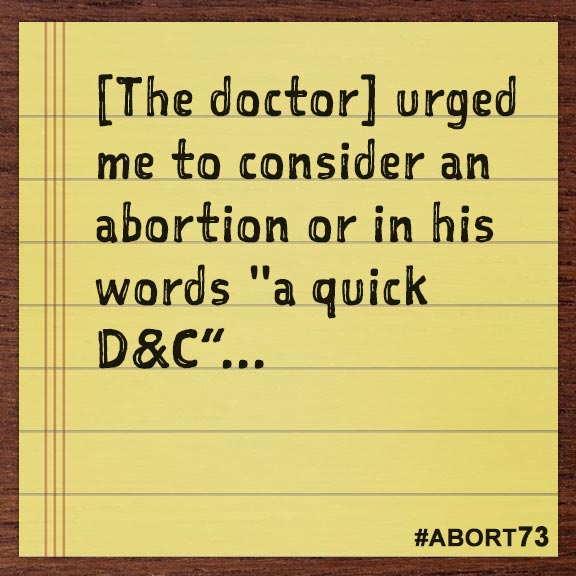 [The doctor] urged me to consider an abortion or in his words "a quick D&C” ...

Ladies, Girls, think twice—that little foetus inside of you may be destined for greatness!!

Twenty eight years ago I discovered that I was pregnant. My second of two children was 12-years-old and my career was really taking off. I did not want another child. I already had a boy and a girl, I did not want to have to deal with diapers and feeding and sleepless nights at the ripe old age of 38.

A very prominent gynecologist in my city confirmed my suspicions. I was indeed pregnant! And then the doctor said something that really shocked me.

He said that he could see that I was a career woman and that having a child at this age and stage of my life would be a great setback. He urged me to consider an abortion or in his words "a quick D&C.” I could take a half-day off from work and he would get it done in a jiffy.

Greatly offended I rose from the chair, told him that he was not God and left his office, vowing never to return.

And so eight months later, my third child (a girl) was born. Twenty-eight years later, she graduated as a Doctor of Medicine.

Throughout her years of study, I had promised that on the day my child received her medical degree, I would make an appointment to see the gynecologist who tried to abort my child. I wanted to show him what the child, that he was so eager to abort, turned out to be—a medical doctor just like him. Thankfully that's the only similarity!!!

But as I prepared to visit the doctor, I realized that this was a selfish, revengeful act on my part—which may have absolutely no effect or impact (except maybe the satisfaction of seeing the look on the doctor’s face).

But that satisfaction would only be short-lived. Won't it be more effective to address a letter to women and young girls everywhere, who may be faced with a similar situation? Won't it be more impactful to encourage women and young girls into making the best decision for themselves and their baby? From my experience, I can let them now that many “so-called professionals” are only trying to hoodwink us (lesser mortals) into making a most terrible decision—to take the life of our unborn child—to commit murder!

That little seed growing inside your womb, that they want you to believe is not really a child, “it’s only a mass of tissues, it does not have feelings,” could one day become a great Evangelist, the next President, the next Prime Minister, the next great Doctor, your strongest supporter, the child who will take care of you in your latter days.

I appeal to you Mama—THINK TWICE!!! I am so joyous and thankful to God that I did.