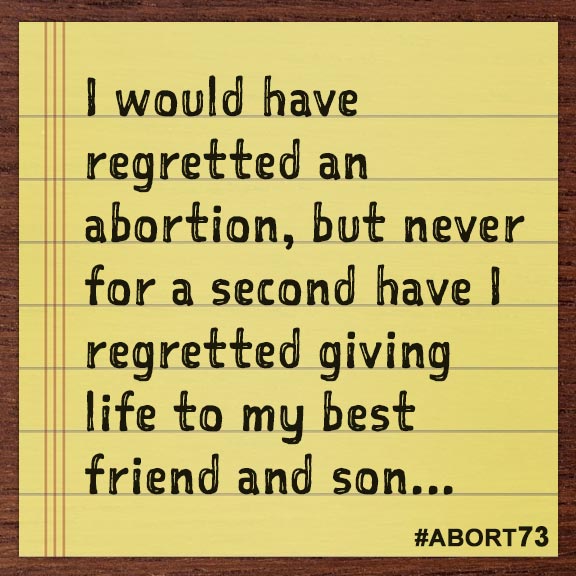 I would have regretted an abortion, but never for a second have I regretted giving life to my best friend and son...

I was 17 when I found out I was 7-weeks pregnant. I had only been dating my boyfriend for six months, and I was a senior in high school. I was terrified, embarrassed, confused, and about every other emotion under the sun. I told him immediately and he assumed I wanted to keep the baby, but I was considering an abortion—due to how scared I was. I went to a local women’s center that preformed pregnancy tests and ultrasounds by myself the next week. They told me I was 7-weeks pregnant, and they asked if I wanted photos of the ultrasound. Without hesitation, I said “yes.” I cried and cried looking at my baby, then I sat down with a counselor to help me analyze my options. I still was leaning towards an abortion. My boyfriend continued to be against it. Two weeks later I told him I wanted to go the abortion clinic, and he went with me unwillingly. We got there, and it was the most terrifying and cold environment I had ever been in. We sat in the waiting area for about an hour, and saw young women leaving bawling their eyes out, carrying a little brown paper bag with antibiotics in it. I read posters on the walls that women had written to their unborn children on. Also, there were women in the waiting room talking to their significant others with sad eyes, as if they were saying, “please don’t make me do this.” I then went back and had an ultrasound, while my boyfriend met with a counselor. I saw that tiny baby one more time, and my boyfriend said, “Please don’t do it.” I still made an appointment to have it done in two weeks. Within a few days my boyfriend took me to a local lake and we sat there and talked about it. I looked out on the water, at how beautiful the world was. I thought about the photo of my baby, and lastly I thought to myself: “You’ll regret having an abortion, and you’ll live with that for the rest of your life, but you will not regret having a child.” I told him my decision, and he hugged me and we cried together. I had my baby months later and I agree with my old self. I would have regretted an abortion, but never for a second have I regretted giving life to my best friend and son. I sit here typing this with my sleeping 2-month old on my lap with tears streaming down my face because I simply cannot imagine if I would have made a different choice. Giving this little boy life was the greatest thing to ever happen to me.