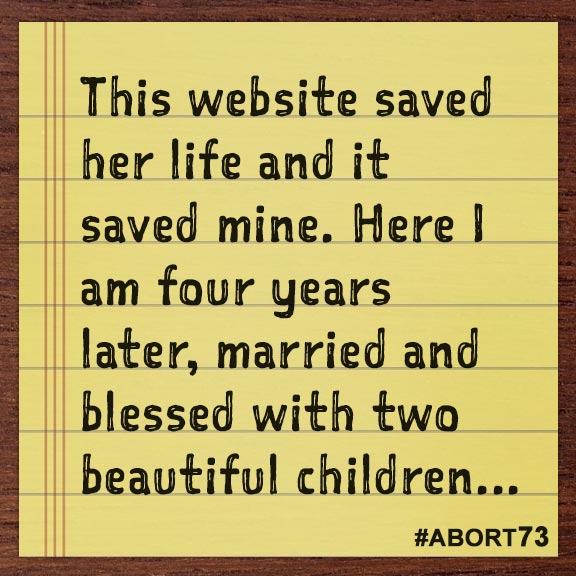 This website saved her life and it saved mine. Here I am four years later, married and blessed with two beautiful children...

Five yeas ago, on Fourth of July weekend, I found out that I was pregnant. I was nervous because the father was someone I had only been with a month. I was living with a friend and had recently quit my job. The baby’s father was not at all happy when he found out. He said he wanted nothing to do with the baby or me—and that’s the last I heard from him. My mom was sick and in the hospital when I told my parents and moved back home. My dad was so angry and wanted me to have an abortion. He said there was no other option. My mom said it was my choice, but she didn’t have much say because of how sick she was.

After listening to the hateful things my dad was spewing from his mouth, I decided to just have an abortion. I was scared and didn’t want my dad to hate me. Two weeks later I was sitting in the abortion clinic waiting room, waiting for my name to be called. I sat nervously scrolling through Facebook when one of those "sponsored posts" came across my news feed. It was for Abort73. I clicked on their website and began reading through stories and watching videos. It was in that moment I knew that I could not go through with an abortion. This was my baby, and I was going to keep him/her regardless of what my dad or anyone else thought!

I walked out of that office and seven months later gave birth to the sweetest baby girl. I named her Ashleigh. This website saved her life and it saved mine. Here I am four years later, married and blessed with two beautiful children. It wasn’t easy, but it was worth it. So anyone feeling lost or like they don’t know what to do, please know that you are not alone. You are strong enough to do this!