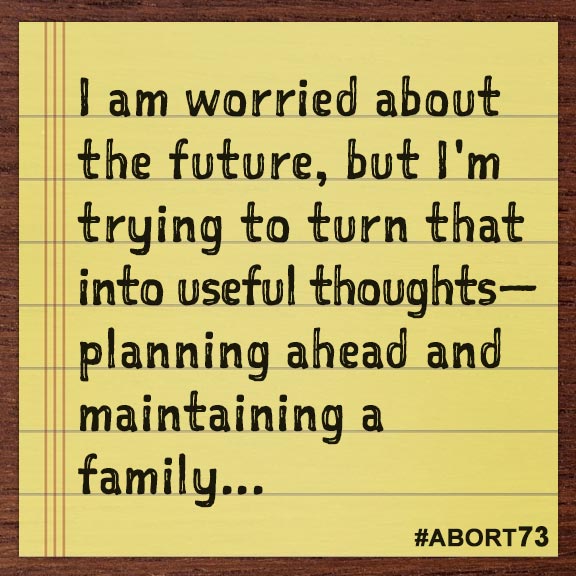 I am worried about the future, but I'm trying to turn that into useful thoughts—planning ahead and maintaining a family...

I was always in and out of a relationship with my baby father, but we never stop contacting each other—so we always make up. I had moved from my mom’s house, to his parent’s house, to my cousin’s house, back to his house, back to my mom’s house, and am now living in HUD housing with my best friend, who put me under her lease. I have one child who is about to be 3-years-old in March. I just found out I'm pregnant on February 2016. I was just waiting on my period to come to start the pill again, and it never did. One thing I’ve noticed from my relationship with him is that every time we break up, one of us is in a situation where we search for support from the other. From there, we forgive and move on. Before I found out I was pregnant, we weren't together. It was the longest that we’d been apart. He still was helping me out. He took me grocery shopping and bought a test.

I cried so much and felt I wasn't ready for so much unexpected pressure. We didn’t believe in abortion, but that was the first thing we thought about. He stood thinking alone while I cried in a different room. Then he had to go to work. I felt so lost, like everything was a dream. I wasn't ready; my son was still young. I’m new to my county and starting all over. I was planning on starting community college in March. The morning sickness was getting worse, I was drained from the news and feeling physically sick—plus I was thinking about an abortion that I knew might haunt me all my life. I made an appointment for the weekend after we found out. We had been thinking hard, and he felt we weren’t in a stable enough relationship to keep it. He then got into researching on Allah because he became a Muslim not to long ago and realized he’d been in denial about it. He knew it was very wrong to get rid of something God let happen to us. I brushed it off because I knew that if I kept it, I would be the one stuck. He can walk away all he wants from being a father.

I then prayed to God as a Christian, the day before my abortion, that God would give me a sign because I was so lost. That night I had two dreams about fire. I can't explain one, but one of them was that my son’s father had put out a fire I saw around me. I came to find out that he also dreamt about fire that he cannot remember. He then said, “Damm, we going to hell for this.” We were already at the clinic, and it was a whole process. I was planning to get an abortion pill, and my son’s father was going to pay for it. They confirmed the pregnancy through ultrasound. They checked my vital signs, blood type, and iron level. They talked to me about what to expect from the pill and what to do with the next set of pills. Then they confirmed that I wanted to do it and why.

From that last conversation with the staff, I noticed that none of what I said sounded good enough—even after explaining that I did not want another child to struggle with me. Deep down, I know that moms have used their strength and build strength because we were made for this, to have babies and raise them. How cruel would it be to end a unique developing human because of fears over faith. I started to think, “Oh my God, I'm really about to go through with an abortion.” I felt I would never be the same person if I did this.

Every time I went back to the waiting room, my son’s father tried to get my to keep it, but he supported my choice if I decided to not keep it. After the last conversation I had with the staff, I wanted to run into my son’s father’s arms and cry and run out of the clinic with him—free. But when I got back to the waiting room, instead of watching our son, he had fallen asleep, I looked at him with shame and anger. He woke up on his own, looked at me, and asked what was wrong. I went off and said, “I came back wanting to cry into your arms but look at you. You’re unavailable, always sleeping. You are not ready for another child.”

I cried so much, and he was mad at himself. I was so confused; he comforted me and made me promise that we would stay together, that we would build a family. He said he would support us and that I wouldn't have to work but could stay home and do college when the time was right. He said that he got a lot of messages from God, and he knew that he needs to support his family all the way. Mind you, he has two other kids from two other baby moms, and this would be his 4th child out of wedlock. The staff at the clinic was so nice and organized they did nothing wrong. We were given so much time in the waiting room. My son’s father told me to get his money back and we’d go out to eat. He was joking, but I was looking forward to it because I was nauseous and hungry. One of the staff called me, and I asked for more time. They said they would come in five minutes to check on us. About six minutes passed, and I started to walk to the hall to find someone. The staff was coming in already and I asked if I could speck with someone. We go into a comfortable, private room and I told her I changed my mind. It was such a relief to me. She was supportive and showed me my ultrasound, which mainly just showed the sac. And she explained the refund we get back which was less than half, because of the services they had already done for me. She gave me resources for OB/GYNs in the area. We left and went to IHOP. I was glad I didn't come out of there with a killing pill in my belly. It's only been a few days since the clinic, and I am worried about the future, but I'm trying to turn that into useful thoughts—planning ahead and maintaining a family. Don't abort!