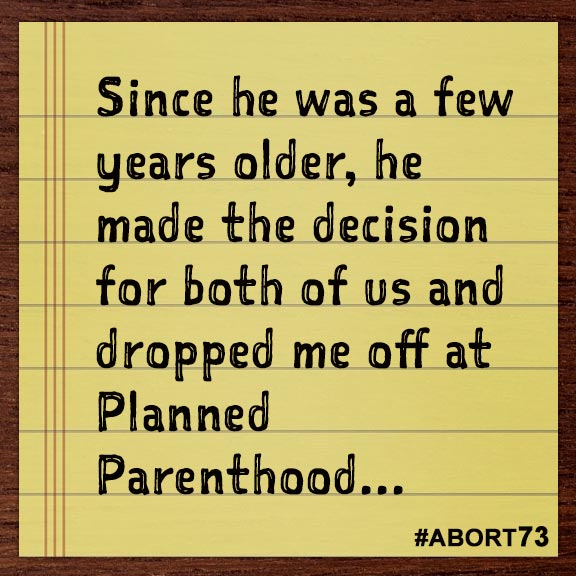 Since he was a few years older, he made the decision for both of us and dropped me off at Planned Parenthood...

I was 18 when I found out I was pregnant and was not thrilled to find out the news. I told the father, and he was clearly stunned. He asked me what I wanted to do. I told him I had no idea. Since he was a few years older, he made the decision for both of us and dropped me off at Planned Parenthood the next week. A complete bundle of nerves, they called my name and I went up and spoke to the lady at the front desk. She promptly asked if I had anything to eat or drink since the night before. Uh oh, I’d had orange juice, which meant no abortion, because I could aspirate. The very next week, my mom jokingly asked if I was pregnant because I was sleeping so much. Since she asked, I said plainly, “yes,” and soon after fell asleep. The next day she made a doctor’s appointment for me, and I had an ultrasound where I saw my son sucking his thumb and I couldn't do it. So I decided on adoption and that was the choice I had made until the father and I decided to get married on the day our son was born. One month ago, the baby in question turned 21 and is a big goofball. His father and I are still married. :) I feel that a lot of young girls are worried because they think they have to keep the baby if they have it, but adoption is such a beautiful option and there are so many couples that so badly want to start a family. My story ends well, and I hope things get better and happier for a lot of the women whose stories are on this site.