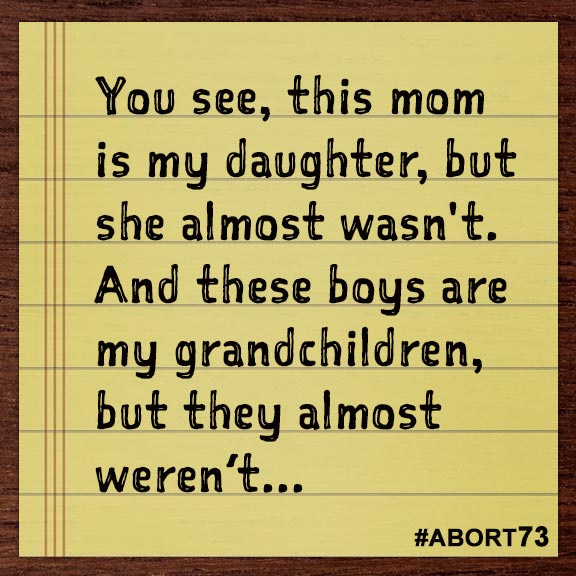 You see, this mom is my daughter, but she almost wasn't. And these boys are my grandchildren, but they almost weren’t...

Jacob is four. He loves cars, and trucks, and Curious George. Daniel is two. He loves whatever Jacob has at the time. Aside from their mutual passion for Hot Wheels, they’re rather different little people—one is quite temperamental, while the other is kind of mellow. Their mom is a child photographer who specializes in newborns. She started out by taking pictures of the boys and posting them on line. Pretty soon, friends were asking if she would take pictures of their kids for them. With child-care being so expensive, she soon quit her job in human resources to stay at home and pursue her love of photography and children. It’s been tough at times. But then, it’s family.

Yes, it’s family, but it almost wasn’t. You see, this mom is my daughter, but she almost wasn't. And these boys are my grandchildren, but they almost weren’t. Back in the spring of 1980, when our daughter was conceived, we were liberal-minded, young post-hippie types who were engaged and wanted to save some money, get better established, and maybe do some traveling. We weren’t ready for children yet. After all, there was, well...us. When we got the news that we were pregnant again, we knew what to do.

We’d been down that road twice before, and abortion was the logical “choice.” It had been established in our minds long ago that this “fetus” was little more than a blob of cells, like a wart growing on one’s hand that could easily be removed with a simple outpatient treatment by any number of doctors. Previously, during the years of our tumultuous youthful relationship, we’d had the procedure done at out of town clinics–in part due to lack of “access to women’s health care” locally, as well as the desire to retain our confidentiality in this “personal” matter. As fortune would have it, though, a local ob-gyn doctor was now providing such services in Marquette.

On the would-be day of our daughter’s abortion, we knew the drill and how to avoid focusing on the reality of what we were about to do. So, I walked my fiancée into the doctor’s office, waited briefly until they called her in, and promptly headed for the parking lot to smoke away the requisite amount of time. When she reemerged, I would care for her as one might tend to a loved one coming out of oral surgery for an impacted wisdom tooth. I knew what to do.

But this time, as I was leaving the building I was met by a young family on their way in. I politely held the door open for them as they entered. The father was holding their three or four-month old baby over his shoulder, and as I watched them pass the brown-eyed infant’s gaze locked with mine. I will never forget those eyes. They stared at me with a depth of soulful innocence that seemed to plead in unspoken words. Transfixed, it took only those few seconds for my heart to melt. And as it thawed, the blindness fell away from my mind like a loosened handkerchief.

I immediately rushed back into the building and bolted for the doctor’s office. When I got there, I was informed that she had already been admitted and was awaiting the procedure in the next room. Pushing the nurse aside, I demanded to see her. There she was, in her white gown and looking astonished to see me there. “Put your clothes on,” I said, “we’re having this baby!” Her answer was just as abrupt and just as certain. Bursting into tears, she hugged me in a shared embrace of relief and joy.

Two years later, we had another baby and there was no discussion of “if” this time. For us, life was no longer a “choice” that resided in our own hands. That was thirty-one years ago. Our marriage didn’t last. She remarried and was tragically killed in a car accident some time later.

In the face of such trials at the tender age of nineteen, our daughter soldiered on and graduated from college in Wisconsin, just as she and her mother had planned. While there, she met a young man to whom she became engaged, and started to live together with him. When they returned to Marquette for a visit, I knew the time was right for a father-daughter talk about what she would do if she became pregnant. Predictably, she began with the usual “over-population of the world” liberal rationalizations as if to educate me in current social realities. To her, I was just her (now) conservative, (now) religious, old-fashioned dad who probably never had a progressive thought in his life. And so, it was then and there that I told her her own story just as I have told it to you.

Jacob is four. He loves cars, and trucks, and Curious George. Daniel is two. He loves whatever Jacob has at the time. One is temperamental and the other is kind of mellow. Their mom is a child photographer who specializes in newborns.