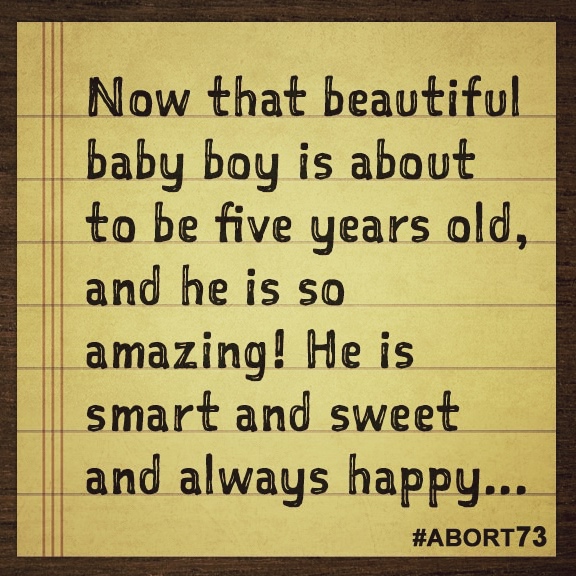 Now that beautiful baby boy is about to be five years old, and he is so amazing! He is smart and sweet and always happy...

About eight years ago I befriended a person who wasn’t really a great friend, but for whatever reason, I felt the need to be there for her. For four years we were inseparable. I was there for her when she fell for the wrong guy and was hurt by him. I was there for her when her “best friend” stabbed her in the back. When the power was turned off at her house and her mother left her there alone, we went and got her. She stayed at my house so she didn’t have to do without. Through it all though, she still found ways to hurt me. I never understood why I felt such a strong need to be there for her. Little did I know that now, eight years later, God would show me why. Inherently, she was “pro-choice.” She told me that her mother had had several abortions because the pregnancies were unplanned, and she was on medications that could possibly cause birth defects for the baby. I could not hide the heartbreak when she told me. When she finally asked me how I felt about abortion, I poured my heart out to her about my beliefs and why I’m pro-life. She grew very quiet, and that was it. We never really talked about it again after that.  A few years later, I found out that when she stayed at my house, she was sneaking into my older brother’s room at night. We stopped being friends after that, but her relationship with my brother continued. Long story short, he called me crying one night to tell me that she was pregnant. It scared him that he was going to be a father, but he was even more scared that he might not be. She had a bone disease that causes them to be very brittle, and her mother told her all her life that she would never be able to have children and that it would kill her to give birth. Given her family history, we were all very scared about the choice that she had to make. I cried and prayed for a week straight. No one heard from her or knew what was going to happen. Then one day my brother called me again crying. I was scared to death not knowing what kind of tears they were. She had decided to see a specialist before making her decision, to see if it was possible for her to carry a child. The doctor told her, “Of course you can! We would keep a close eye on you as you got into your last trimester and you would likely be on bed rest during that time. We would have to do a c-section and the baby would likely be a few weeks early. It may not be as easy as it is for some, but the answer is yes, you can safely carry a healthy child and live to raise him/her if that’s what you choose.” She decided after that appointment to keep the baby, and the pregnancy and birth pretty much went the way the doctor had said it would. Now that beautiful baby boy is about to be five years old, and he is so amazing! He is smart and sweet and always happy and so many things that I can’t even put into words. My mother, his Mimi, has custody of him, and he is growing and thriving more every day! He is such a blessing! On his way home from school last week, he got really quiet and he looked at her and said, “Mimi, the day I was born God told me, ‘There are no accidents!’” She was speechless! All she could do was tell him that that was very true, and he was a very smart boy as she tried her best to hold back the tears. As soon as she got home and he went to his room to play, she called me and told me what he had said. I cried so hard. That baby has never EVER been called an accident or anything of the sort. He has no clue the circumstances he was born into or why Mimi has custody of him—and wouldn’t understand it if we told him. He had no clue the weight of his words that day, but it touched me so deeply and answered a question I had never found the answer to. Why did God want me to befriend and try to help this person if she could not be helped? I always thought that I was drawn to her because He wanted me to help her and guide her down a different path than the one she was headed for. When I couldn’t, I felt like I had failed her, failed Him. I didn’t understand why He would want me to try to guide her if she would never accept Him or my help. My sweet nephew gave me the answer that day when my mother told me what he had said to her. There are no accidents. It wasn’t an accident that I befriended her and was given the chance to share my beliefs with her. I never even thought she took it to heart, but I realized that day that maybe she did remember that conversation  about how beautiful every life is. Maybe that conversation helped change her heart and helped her with her decision to choose life for that sweet baby she was growing. Or maybe if I had not befriended her, she would never have met my brother and my nephew wouldn’t be here. Either way, there are no accidents! That baby is such a blessing, and whatever changed her heart, glory be to God!