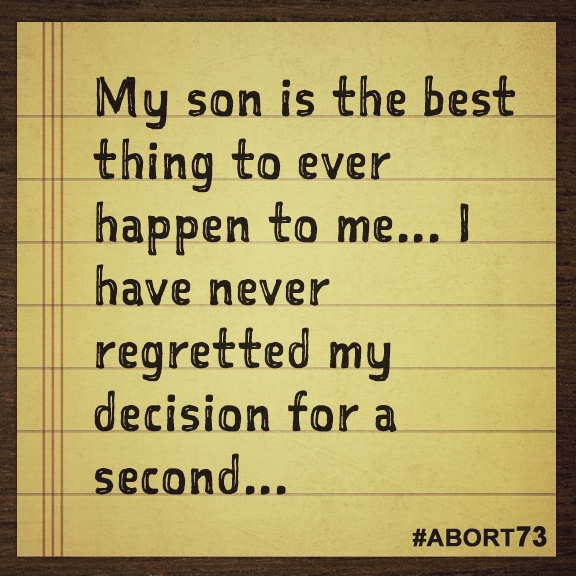 My son is the best thing to ever happen to me... I have never regretted my decision for a second...

I was 19 when I met my now ex-husband. To be honest, I should have never been with him in the first place, much less married him. But that's all water under the bridge. We were married for about five months when I started to not feel quite right. It was mid January. The only explanation I could think of was that I was pregnant. We were pretty poor at that time. I was the only one with a steady job. Even when my ex did have work, the money never went towards our bills. When I started thinking I was pregnant, things began to rapidly get worse. My ex would be out all night, six nights a week—with my car, which was my only transportation to work. He even started sneaking the rent money out of my wallet so he could go out with his friends. Whether or not he wanted me to keep the baby varied by day, depending on if he wanted anything out of me. If he didn’t, he would pressure me to get an abortion. The pressure continued to get worse. At one point, he even told me that because I refused to have an abortion, he would try to cause a miscarriage. I was terrified that would happen. I was HORRIBLY sick the first few months and lost over 15 pounds—as my ex gorged himself on everything he knew I was able to keep down—trying to make me lose the baby. He told me that it was either him or “it.” I made my choice. I called my parents and moved out the next day. My parents have been incredibly supportive and helpful. Every bedroom in their house was full, so they converted their living room into a room for my baby and me. My parents do foster care, so they keep the basic baby items around, giving me access to a crib, high chairs, car seats, strollers and even some clothes. Being a single mom hasn't been easy, filing for divorce, raising my son on my own, getting back into school, but I can look at it and know I made the right choice. My son is the best thing to ever happen to me, those sweet kisses he gives me, hearing him call "mamma" whenever he sees me. I have never regretted my decision for a second.