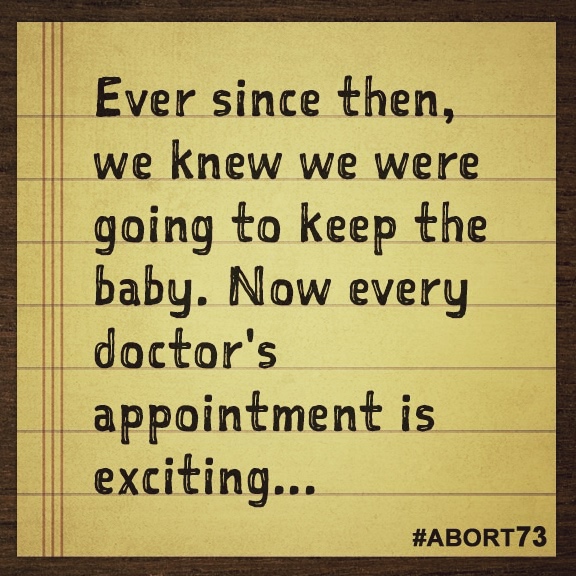 Ever since then, we knew we were going to keep the baby. Now every doctor's appointment is exciting...

When I found out I was pregnant, it didn't really hit me entirely. I had already suspected for about a week, but I refused to get nervous until I took the test. My boyfriend was out in the living room talking to our roommate, and so I just walked to our room—unsure how to get his attention. I sat on the bed alone, just looking at the test. Only six months before, I had faced a similar experience. Looking at that sort of thing, alone, is quite scary. My boyfriend would have wanted to know that time too, but I was about to get on a plane. I decided to wait until I got back. But I never told him. Instead I miscarried in a foreign country. Alone.

So this time, looking at the test, I didn't feel like it was real. Half of me felt like it was all happening again, and I tried to imagine what it would be like to go through another miscarriage.

My boyfriend didn't come to see me. I waited and waited, hoping he would come. Eventually I got up and found him in the kitchen. I think he knew already and just wanted a couple more minutes of believing it wasn't true.

We went for a walk on the train tracks near our place—both waiting for the other to speak. Incredibly, his first words were hopeful. He was trying to figure out how we could make it! How we could keep the baby. Looking back now, I realize how meaningful that was, but in the moment I was so scared, so ashamed. I yelled back that this wasn't his decision. That he had no right to tell me what to do. That I didn't believe in him. In us. We couldn't do it. I had decided long ago that there was no way I could carry a life inside me for 9 months and then give it away, so adoption was out. That left parenting or abortion. His first instinct was parenting; my first instinct was abortion.

Despite backing way off the next day and telling him I wanted to consider our options, he latched onto the idea of abortion. He thought that was what I truly wanted, and he didn't want to make the decision any harder on me. I was afraid of the clinic, so I researched ways to induce miscarriage naturally. I figured that was best. For about a week, I took massive amounts of vitamin C in an attempt to kill the life inside me. It just made me sick. I threw up constantly and felt so miserable I could barely move. Plus I was torn up inside about the whole thing. Its not that I didn't want the baby. I was just scared. Eventually, I told my boyfriend that I didn't want to do this. He encouraged me to keep trying. After a few more days, I started crying, begging him not to make me do this. He looked so distraught and asked if he really was making me do this. When he understood I no longer wanted this, he asked me to stop taking the pills. We sat in limbo for a couple days. We went to a Life Center and talked to Planned Parenthood. We did some research and some thinking apart from each other. When we came back together we were still at odds in our thinking. My maternal instinct was taking over, and he was still scared and stunned with the concept of being a father. We were both utterly miserable.

What really changed things for us was talking to our mentor at church. He met us one night at a Starbucks, and we told him about the pregnancy. I wasn't sure how I expected him to respond, but certainly someway other than how he did. He grinned so widely and oozed excitement. His joy was positively infectious. He wasn't judgmental, he wasn't patronizing, he didn't tell us what to do. He was just thrilled for us. And when we told him about considering abortion, he was serious but accepting. He told us that he had his beliefs, but he would love us either way. Having this acceptance was so important to our decision. Planned Parenthood assumed I didn't want it and couldn't care for it. They offered no options, no information on state aid or anything. The Life Clinic lectured about how life was valuable, but never understood we were just scared kids who felt like bringing a baby into the world would be unfair or cruel. Our mentor understood all of that. He told us about PEPW (Presumptive Eligibility for Pregnant Women) under Medicaid, WIC, and SNAP. But he understood how scared we are. He permitted all of our feelings. We didn't have to explain or justify them, he let them all be legitimate and because of that, I was finally able to feel all of them. I let myself be excited for the first time. I let myself be hopeful. If one person could accept us, then maybe others could as well. He made it clear that he didn't see us any differently. He didn't see us as sinners, or failures, or (possible) killers. He saw us as the people we always were, and he told us he thought we could be good parents if we wanted to be.

Ever since then, we knew we were going to keep the baby. Now every doctor's appointment is exciting. We talk to our mentor weekly and he keeps us motivated. Little by little we have told people and guess what?I haven't had a bad reaction yet! Not everyone is as excited as our mentor, but all our friends are very supportive. We still haven't told our parents. That will be more challenging, but so far I've discovered that joy is infectious. As more and more people gather around us to encourage and not judge, I realize what an amazing thing this new life is. It came a lot sooner than I anticipated, but as each day passes and more people know, I get more and more excited to meet the new little person growing inside of me. My boyfriend too is excited. He is still terrified he won't be a good father or that our baby will grow up in poverty, but every now and then he places his hand on my stomach or mentions a name he likes and I grin, because I know he is excited too.

To anyone considering abortion: Talk to a respected friend first. Specifically someone older and more experienced. Pick someone who will understand all your feelings and talk them through. No one should abort just because they are scared what others will say. Stop imagining the worst like I did, and find someone who will love you no matter what you decide. This is incredibly freeing, and you may find yourself able to make the decision you never thought you would.