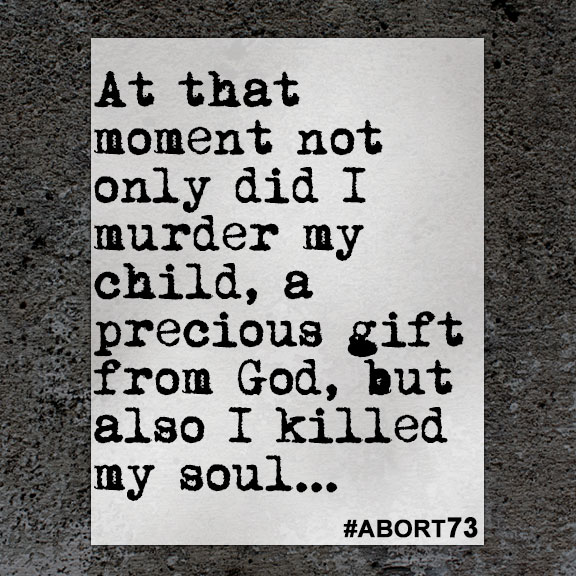 At that moment not only did I murder my child, a precious gift from God, but also I killed my soul...

I'm not sure how to begin. I have NEVER shared my story with anyone! But if this helps one woman out there then my shame will be worth it! Before even going into details, I read a few of these stories and I feel worse! My story begins as a 16 year old girl who only completed the 9th grade! I found I was pregnant a month after I turned 16! The father and I did get married and the baby weighed in at 5 lbs, 8 oz. The father turned 18 just 3 weeks prior to her birth! Our marriage was as expected with 2 teenagers. We didn't know how to be ourselves much less parents, but we made it! 2 years later we added another child, a beautiful baby girl! Sadly we couldn't manage our lives and we didn't know God, at least not the way I now know him! Please, if you are reading, please keep reading, it will help someone! I tell you all this to get to my story! After my divorce, I turned 21! Hurt, angry and alone (so I thought) I turned to the party scene! Mainly to feel numb! I didn't respect myself or anyone at this very low point in my life! I became pregnant and the father said he wasn't ready for another child and talked me into having an abortion. Being in the medical field I convinced myself it was just a surgical procedure. We went to the clinic and I was taken back and asked a few questions, was given a pregnancy test and then the sonar. They would not allow me to see the sonar at all! I was so sick with morning sickness that I had already been in the hospital for dehydration and was on the verge of losing my job. There I go defending my decision again. Truth is, there is no good enough excuse, period! The woman doing the sonar said if i saw it I wouldn't go through with it! Imagine, I would still have a choice. After that they gave my valium and tylenol! Forty-five minutes later, I was on a cold table with so much noise I couldn't think! I didn't know what to expect but it was more painful than I imagined. Not just physically but in every aspect you could have pain! It looked like a big vacuum cleaner and you could hear chunks of flesh being ripped from my womb! I can only describe what happened to me next as a complete separation from my soul! At that moment not only did I murder my child, a precious gift from God, but also I killed my soul! After the recovery phase there, the father drove me home and left me! I wish I could say that I had some spiritual awakening but regretably I sank further into an evil world! About a year later I woke up in a motel with some man I didn't know, not really! I knew his name but that was it. I was actually seeing a man at the same time and had been for 6 months. I found out I was pregnant again about 3 weeks later. The man I was seeing demanded an abortion. He had already told me at the start of the relationship that if I became pregnant he would want me to have an abortion! So here I am, 23, a single mom of 2 beautiful girls working as a tech in an ER! I was again in the hospital for dehydration, this time for a week! I knew that surely God had already given up on me, so I again had a second abortion! This time as my punishment I forced my way to see the sonar and I refused the meds for sedation! Again this man drove me home after and was done with me! At this point I gave up hope of ever being loved by anyone ever again, especially by God! I sank into a deep depression and even attempted to kill myself with a bunch of pills! They just made me throw up, didn't realize it at the time but that was God! My torture of self still continues to this day! I know that God has forgiven me, the hard part is forgiving myself! I am now very happily married to a godly man that has true love for me! I know that it is true because it is unconditional love, he knows the worst things about me and loves me anyway! He showed me what God's love really is! It took him the first half of our marriage to get me into church, but he did it! I am now blood bought, baptised and born again in the blood of Jesus! I continue to carry this dead weight I believe because I haven't helped anyone to not do it! I am still scared of what people will think of me and will never speak to me again! But every September through November I am so depressed I can't breathe. I don't know where to begin to help but I hope this was the right place! I can only say that I feel those babies would have brought more blessing to my life than hardship! I now also have another child, a son, He may never really know that he is my angel on earth, my redemption.