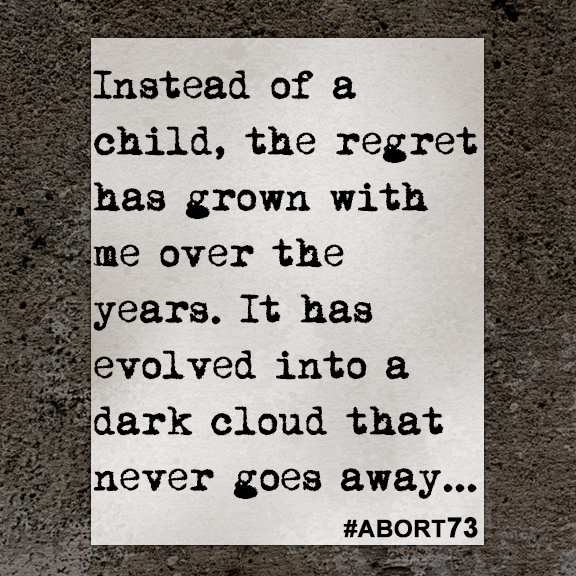 Instead of a child, the regret has grown with me over the years. It has evolved into a dark cloud that never goes away...

I had my first abortion when I was 17 years old. Unfortunately, I did not come from a supportive family, and I thought that the baby would provide me with a loving relationship. The father was young also. He was more concerned with "the streets" than with raising a child. After I told him that I was pregnant, he disappeared and resurfaced four months later with a new girlfriend who was also pregnant. My decision to have an abortion was a long one; my dreams of a family had vanished and I was alone again. I will never forget the abortion clinic on that dark and rainy day. I will never forget the cold and unfeeling receptionist who yelled at me to "SPEAK UP" when I tried to ask her for the correct floor. Finally, I will never forget the empty feeling in my heart when I finally woke from the anesthesia. It was over and there was no one left but me and my regret. Instead of a child, the regret has grown with me over the years. It has evolved into a dark cloud that never goes away.