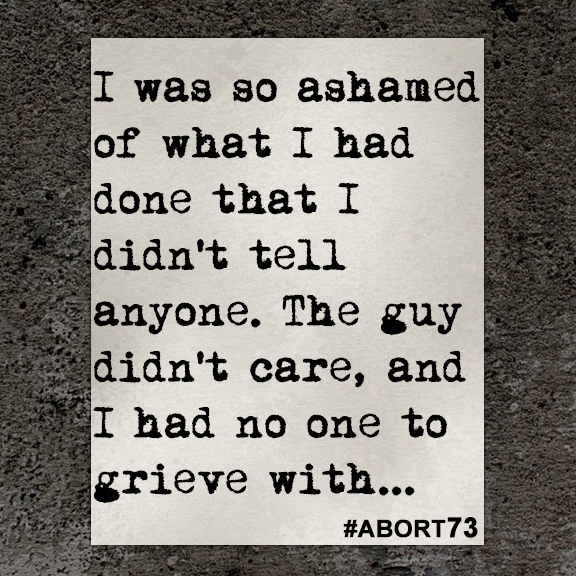 I was so ashamed of what I had done that I didn't tell anyone. The guy didn't care, and I had no one to grieve with...

About seven years ago I was dating a guy that I thought I would marry. I ended up getting pregnant. He said that he didn't want children and would leave if I had one. So in order to keep the guy, I decided to have an abortion. I remember going in to the clinic trembling. I honestly didn't want to do go through with it, but I considered the guy more important. I WAS WRONG! Once in the clinic, the doctors did an ultrasound to see how far along I was. Then they left the room so I could get dressed. I tried so hard not to look at the screen that still had a ultrasound picture on it. I remember thinking that I should just run. But I didn't. I went through with the abortion. I cried all the way home, but part of me was thinking that the guy I was with would now be happy. It didn't work that way. I was so ashamed of what I had done that I didn't tell anyone. The guy didn't care, and I had no one to grieve with. I ended up sinking into a depression and was always angry. I would yell at anyone but the guy I was with. I let him walk all over me. He ended up getting into cocaine, and he even dealt it for a while. Obviously the guy and I broke up, but I did get pregnant right before we broke up. I kept my son. It was because of my son that I came to God. I knew that I didn't have the wisdom to raise my son the right way. I have since married a wonderful and forgiving man who has adopted my first son. We now have another son. But still on a daily basis I think about my Baby that I aborted. I wonder what he or she would have been like, and I often cry because of what I did.